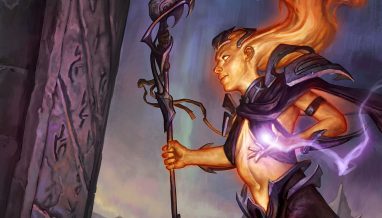 Since the release of Argent Depths, we’ve seen a ton of shakeup in both the Throne and Expedition meta. This past weekend during the Throne ECQ: Dead or Alive, two new decks broke out in dominant fashion in Even Xenan and Rakano Surge. With both decks capable of consistently gaining huge amounts of health in a single turn, they threaten to push out aggressive strategies. We wanted to address that as well as some other issues. The following changes will go into effect tomorrow, July 16.

Trickshot Ruffian has caused quite the shake-up in Throne since release. It’s a powerful tool to give Justice decks a huge burst of damage and health. With this change we’re removing the lifesteal element to try and give non-Justice aggressive decks a better chance at winning a race against Justice decks.

Crownwatch Press-Gang has gotten more powerful over time as we’ve printed more strong 1-cost units, and now with its ability to fetch up Trickshot Ruffian as well as Crown Patroller, we felt like it was time to increase the opportunity cost of the incredible selection the Press-Gang can provide.

Bulletshaper is an efficient way to gain additional influence in Rakano decks, and with how important influence has become with Argent Depths, we want to pull back on how early and easily Bulletshaper grants influence.

Ubsat the Savior  – Now 6/4 and silences single-faction units in the enemy player’s hand (was 6/5 and silenced all units).

Ubsat serves an important role in the metagame, giving players tools to interact with some difficult to prevent summon abilities like the aforementioned Trickshot Ruffian. With this change we’re hoping to keep that counterplay aspect while giving it some more clearly defined weaknesses.

Curtain Call is an incredibly strong tool to help Xenan decks catch up on health while also helping them to maintain their presence on board. At 2-cost, we’ve seen issues with how efficiently it can be held up to blank opposing removal and enable game-ending combos. While we like the gameplay in general, we want to pull back on its efficiency and give aggressive decks a little more room to breathe.

Wasteland Broker has proven to be an incredibly popular option for all kinds of decks to add some market access. With a powerful market effect and a durable 4/5 body, it risks becoming too ubiquitous, so we’re reducing its health a little bit to try and encourage a greater range of viable options.

Eager Deputy has made its mark as a great early play with Plunder, helping ensure that players have the cards they need. However, she’s been a little too reliable of a tool for fire-based aggressive decks in Expedition, so we’re taking away a point of health to make her a bit easier to deal with.

Fast spells and ambush units make for dynamic games and big moments, but too many of them can bring a risk of paralyzing players trying to attack into open power. Gentle Grazer ratchets that up with its summon effect bringing along another card for attackers to worry about. And while we haven’t seen a significant difference in winrates between Evenhanded Golem and non-even Grazer decks, the combination can certainly get repetitive. Along with the cost increase, we are lowering its Corrupted cost to 5 to move more power from an early ambush and a chump block to a source of value for Time decks.

We’d like to give some love to underplayed cards from the past, in particular with a focus on some of the lesser-played tribal synergies.