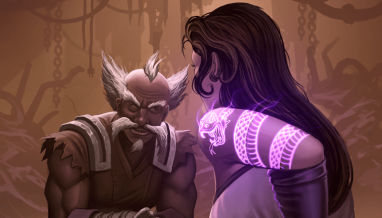 Today we’re announcing some needed nerfs that hit the Rakano Surge deck, some buffs to existing cards, as well as some additions for Draft and Expedition in the Eternal Draft Packs. These changes will all go live on Monday, August 10th.

Silverblade Intrusion and Friends in Low Places are two powerful combat tricks with upside that add to the board. Ultimately, they’ve been proven too reliable to fully unlock early in games, leading to Rakano decks that consistently and quickly snowball games away. Thus, we’re upping the requirements on both spells before their fully unlocked versions are reached. Additionally, while we considered other changes to Friends in Low Places, like lowering the cost of units it plays, we settled on changing it to just draw the unit to preserve it as an impactful tool versus slower strategies while still reducing how much it can do early in games. Finally, we’re moving a source of a lot of influence—Ironthorn, Lawman—down to 1 Health to make him a bit easier to interact with.

Another powerful reward for accumulating lots of influence, at 5, Helio has proven a bit too efficient at accumulating cards compared to other options.

Some buffs to help expand the range of viable strategies in both Throne and Expedition.

The community response to Plunder has been overwhelmingly positive, and we’re adding Plunder to a handful of cards from Argent Depths to give a few more options.

We’re also adding some cards to the Eternal Draft Pack with a look towards improving faction balance in draft, and increasing support for the five Vow-combinations in Expedition. Here are some of the highlights, but you can find the complete list of what’s in the draft pack here.