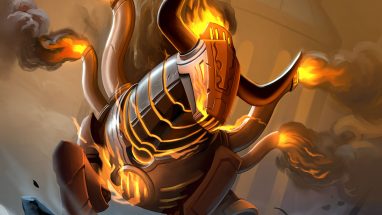 Buried Memories – Things That Go Bite In The Dark

PURCHASE STATUS: Completed
DELIVERY STATUS: Delivered
DELIVERY INSTRUCTIONS: Deliver NX83Z-VULK model to the Skimmer’s Tooth tavern in the Shoals, courtesy of the Valkyrie Dichro. The NX83Z-VULK is under his care and command per the customer’s request.
ITEMS: One (1) NX83Z-VULK SENTINEL
MODEL CAPABILITIES: Hauling, construction, demolition, combat within sanctioned parameters per builder’s specifications found in noted Specifications Articles.
MODEL SPECIFICATIONS ARTICLES: 482R-40, 37X0J-N2
CUSTOMER PURCHASE DATA: Purchased via a representative of HOUSE AUREN for artifact retrieval in the DOWNDARK to be utilized by a previously hired party. Builder does not expect the NX83Z-VULK model to return to the storage facility as all purchase requests have been PAID IN FULL. 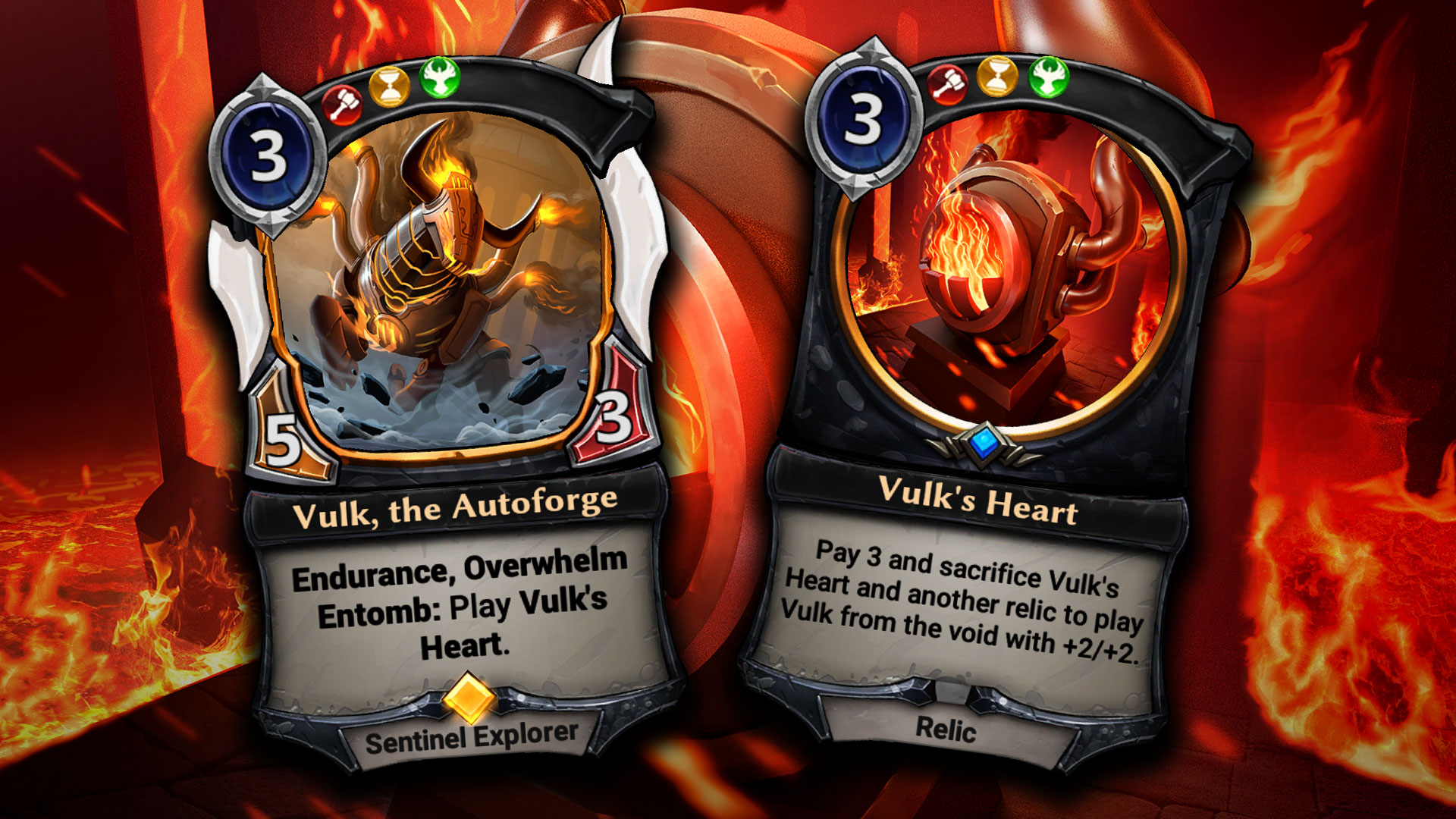 Sensors whirred and blipped as the Vulk unit adjusted her visual input to account for the lowered luminescence of her current position. The sturdy quadrupedal frame of this form had an increased weight carrying capacity of one-hundred and ten percent over her previous, more agile, design. Vulk compared the appearance of the room to schematics and blueprints within the database of information granted by her builder. She internally hummed then spoke.

“This section of dwelling previously occupied by those of nobility would have housed various treasures and valuables deemed necessary to protect due to their material value in addition to their emotional worth,” she said. 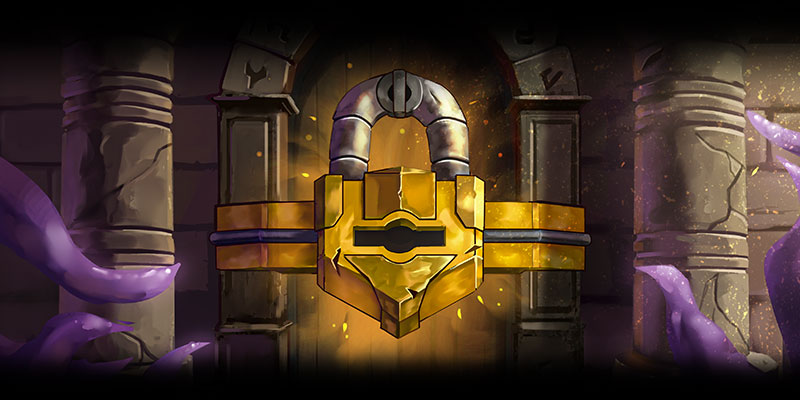 “You could have just said it’s a storage room for valuables,” Hifos said.

“It is necessary to impart all data to all assembled to avoid inefficient or foolish occurrences, as is prone to happen with those that are organic or unpredictable in nature,” Vulk responded with a whir.

“Great, Vulk thinks it’s funny,” Hifos said with a grunt then a chuckle.

“Despite the Asri Ally’s annoyed tone, Gren knows he likes the Big Metal’s joke as she is great at humor!” Gren said in a tone that relayed happiness but placed extra emphasis on the word ‘she’. Vulk calculated the level of knowledge Gren had about the team assembled versus that of Hifos. The odds were lower but not incalculable that Gren knew more about her consciousness and previous forms than the soldier did.

“Humor is an effective aid in reduction of stress for those of organic nature, particularly in preparation to face unknown challenges such as those presented by the current location,” Vulk said.

Hifos seemed to relax his posture and looked between Gren and Vulk a moment.

“Alright, she,” he said, correcting himself,” makes a good joke. A bit long-winded for my tastes.“

The soldier let out a laugh which caused Vulk to study his face more. This switch in behavior and emotional status caused hypotheses and curiosity to stir within her circuitry.

“Let’s have Hifos go first this time though, alright? Better to keep a bit of muscle in the front and the back,” Dichro said behind them as he stood, flaming sword at the ready.

“Not that you can’t take them Gren,” Dichro said with a grin.

Hifos looked down to Gren who gave what sounded like its approximation of a sigh, then nodded.

“Indeed, Gren shall share the glory of first charge with its ally this time,” the Grenadin responded.

“Thanks, we trust you too,” Hifos replied.

Vulk moved in formation with her allies as they ventured into the dark room. Across the stone floor stood a rack that appeared to have previously held swords or spears. Beside them sat broken and splintered wooden chests and an armoire on its side, half-rotted from water damage.

“These containers do not initially appear to contain the Waystone shard sought, but the area warrants additional exploration,” Vulk said as she scanned the room.

“Nothing guarding it either. Good for us,” Dichro said as he picked through some of the broken furniture. Despite his statement that there was no threat, Vulk heard the flick of the flames from his sword.

“Or nothing worth taking,” Hifos said as he moved forward, armed as well. Vulk noted irritation in the human’s tone.

The storage room was large enough for the group to spread out near its entrance and their torches illuminated it halfway. The broken containers appeared barren, scavenged by others who had sought fortune in years past.

“Now’s not the time for singing,” he barked then turned to the less illuminated side of the room.

As Hifos moved, Vulk registered a deep hiss from the ceiling high above them. Sensors and computations caused the Sentinel to buzz as she followed the trajectory of a shadow that descended on Hifos.

Sharp fangs dug into the soldier’s arm. Vulk noticed her ally’s misstepped dodge of the attack. The soldier flailed, yelled a curse, and swung haphazardly into the air. A slithering, flowing Mandrake not unlike Euryd pulsed with purple light and latched its fangs into the soldier’s shoulder.

Vulk noted a difference in the two Mandrakes. Aside from the ominous glow, this one was thornier and doubly larger than Euryd. Vulk estimated their foe was older and thus more cunning than previously anticipated. Readings and hypotheses were scanned and pondered while Hifos grunted unintelligibly from pain. The hulking jumble of tainted flora did not relent. 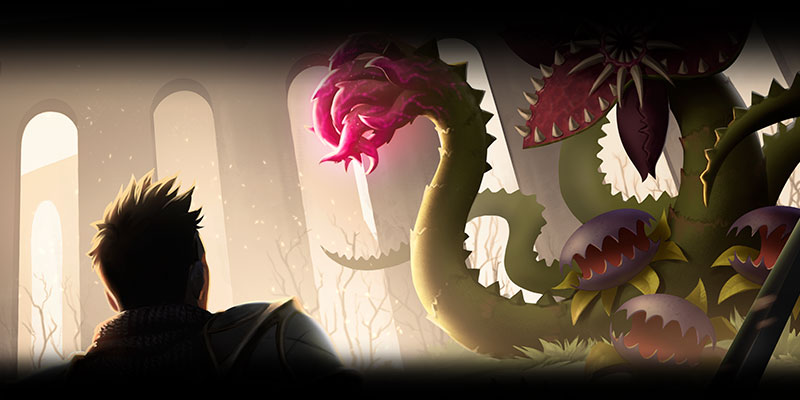 Vulk triggered a defensive response routine and flames sparked from her horns and vents as she prepared to charge. This new form had combat capabilities which her previous iteration had lacked. She quickly parsed through her list of options, likelihood of success, and timing. All pointed to cooperation and synchronization with ally actions. Resources were shifted from full analysis to combat priorities and her internal engines doubled speed in preparation.

Upon arriving at this decision, she noted the movement of Euryd and some of her vines. They slinked forward at a rapid pace and wrapped around each of Hifos’ arms. The vines tugged, rough and powerful, and yanked the man backward.

From Vulk’s left, Dichro’s flaming sword slammed into the front of the Shadowsea-infused Mandrake. The writhing vines shrieked.

The glowing Mandrake released Hifos, who stumbled back several paces. A sensor blipped to note a small black line near the soldier’s feet. As Vulk parsed this new variable she surmised the purpose of the black line.

Before Vulk could broadcast her discovery, the ally Mandrake tugged Hifos further back. Dichro’s sword slashed through the air to keep the opponent at bay as deep, crimson blood splashed onto the stone floor in the torchlight. Hifos groaned. The tripwire snapped.

A loud creak sounded with the rush of metal and gears. Seconds passed and a dense object hurtled forward from one end of the wall. Vulk followed the trajectory of this new object and analyzed its composition. Majority metal, attached to a wall, triggered by the tripwire.

Sharp metal spikes jutted out of the section of wall that slammed into the corrupted Mandrake. It half-pinned the colossal creature. The creature shrieked again. Vulk lowered her auditory reception range. Dichro raised his sword and plunged it once more into the Mandrake. It slithered and flailed then slammed a heavy mass of vines into Dichro’s chest.

The Valkyrie flew backward and collided with Hifos and Gren. The Grenadin clattered across the floor with a number of clanks.

Vulk charged with her horns at the ready and aimed her heavy metal frame at the Mandrake’s appendages as they held down her allies. Her horns rammed the vines roughly into one wall of the room. The corrupted Mandrake let out a wail as sensors indicated a purple liquid dripping from the vines onto Vulk’s horns.

A swift rhythmic hiss came from Vulk’s right as she watched Euryd glide at a pace in time with her bestial song toward the pinned enemy. That immense maw of natural knives moved steadily toward the flailing, injured creature. What Vulk presumed was blood flowed faster onto her horns and the grip of the vines lessened as Euyrd reached her quarry.

Hard, fast, powerful snaps of Euryd’s monstrous teeth dug into the other Mandrake’s body. The steady rhythm and calculated notes Vulk had noticed before from Euryd were replaced with rough hissing at crazed timing. The predator tore into its much larger prey with hisses and bites. The corrupted Mandrake’s screeches echoed through the vast room as piece after piece was ripped away by purple-stained fangs.

As the final screech faded away, Vulk watched Euryd turn to the group with a tumbling song of hissing notes that to Vulk equated to elation.

Vulk heard chittering and growling from a corner behind. She quickly analyzed the source and saw what looked to be a predominantly quadrupedal beast of shadow, all teeth and mangy fur. The creature lunged at Vulk.

Vulk turned, lowered her head and charged. Her inflamed horns found purchase and gored the thing into the wall. It twitched and fell as the Mandrake had. 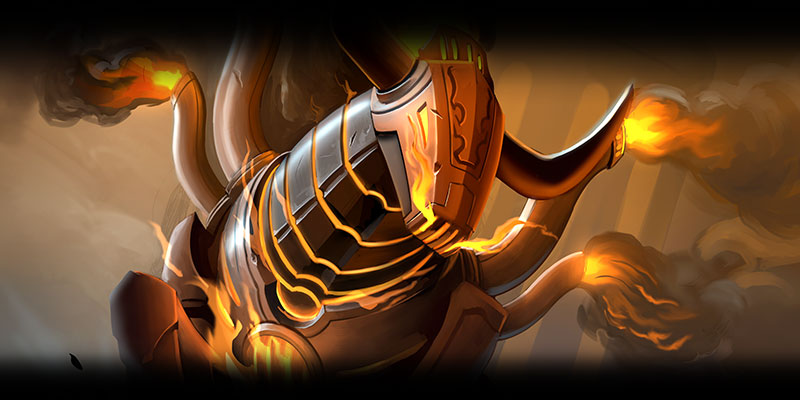 Hifos groaned as Dichro applied a bandage to his wound in the light emitted by his flaming sword.

“The day has been won! Luck had nothing to do with it! The abilities of this team cannot be overstated!” the Grenadin called and waved its dagger aloft.

“Your boundless optimism is… beyond confusing at times,” Dichro said.

“I’ve no idea if you know what I’m saying, but thanks,” Hifos told the Mandrake.

Vulk felt a sensor blip as a gentle tone and small amount of what seemed to be pheromones emanated from Euryd. She estimated this correlated to gratitude.

Meet the party of Buried Memories!

Delve into Bastion’s past in Buried Memories, coming February 11! Pre-order now for the best value!