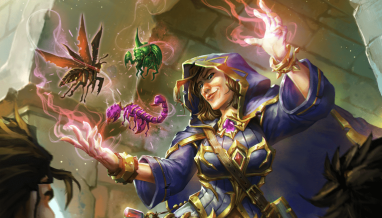 Chapter 45: The Festival of Inspiration

“Kaleb is heir at last!” some crowed. “With Eilyn gone and the Clans destroyed we may finally be safe.”

“Sol shines on Caiphus and his wisdom,” others agreed. 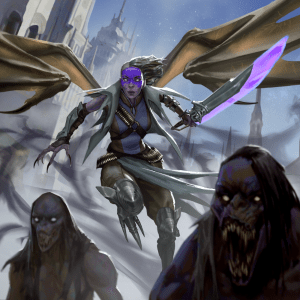 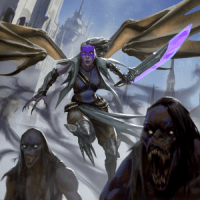 Some citizens moved about quietly, their gaze downcast. They had seen what came for those who voiced their dissent.

Throughout the city, the Crownwatch continued its hunt for Vara. And as their ranks spread out and searched, they brought more news from the Spire. The week-long Festival of Inspiration would begin with the recognition of Kaleb as heir to the throne, and at its midpoint, the traitor Queen would be executed. And as the revels reached their full height, Kaleb would ascend the Spire and be crowned King, to claim his seat beside his father and usher in a new age of triumph and unity for Argenport.

At this proclamation, the crowds began to murmur, and speculation ran through the city like lightning. A Festival of Inspiration? That old tradition? Argenport hasn’t seen anything like that in living memory.

And Kaleb is to be crowned; father and son ruling side by side. What is Caiphus planning? Will his gaze finally shift beyond Argenport’s walls?

From her cell, in the depths of the Crownwatch dungeons, Eilyn smiled grimly. “Kaleb, you fool. Better you than Vara,” she said, staring into the gloom. “You were made for it, after all.”

In one of Argenport’s busiest market plazas, the flagstones rang with steel boots.

“Everyone out! This square is needed for the Festival,” a Crownwatch captain bellowed, his mailed fist resting near the hilt of a notched brodsword. Heads turned, and some of the crowd hurried away. “Move!” 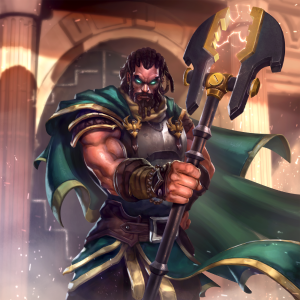 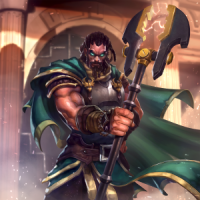 “But my stall!” one of the merchants cried, gesturing to the heavy suits of armor hanging from the walls of his booth. “My wares!”

“Take what you can carry, leave the rest,” the man barked. Behind him, a pair of minotaurs stepped forward holding coiled whips and heavy hammers. “The Auric bank will assist with any damages,” he added with a sneer.

As the merchant was led away, the captain turned to the longhorn guards and added, “Get everyone moving. Clean out the rubbish. The Spire needs this place clear by nightfall.”

The minotaurs grunted, and moved in.

The next morning, the plaza stood vacant, the marble shining like polished bone. Any debris had been cleared away, and the vagrants and other drifters who often slept there had been encouraged to seek shelter elsewhere. They were replaced by a squad of tinkers, who bustled about, constructing new booths, stages, and a large, ornate central platform. They were industrious, and did not notice a pair of small shapes crouched in a darkened alleyway at the far corner of the plaza.

“Is that it?” Vara whispered, nodding at the large, wooden dais.

Next to her, Coslo grimaced. “That’s it. That’s what I saw in my vision. That’s where they’re going to execute Eilyn.”

Something dangerous flashed in Vara’s eyes. “Not if I have anything to say about it.” She stepped back, farther into the shadows, as a tinker passed near their hiding spot. “Think this will work?”

Coslo looked down at his rust-stained hands. “Should do. Everythin’ we scrounged from the junkyard will make one hell of a distraction.” 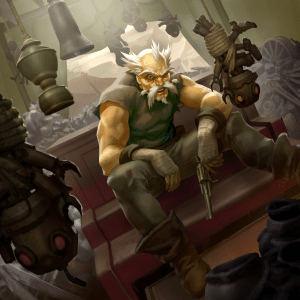 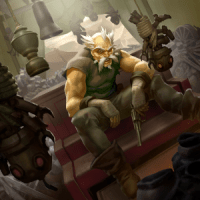 Coslo traded a grin with Vara. The old man was cantankerous, but had a soft spot for the urchin, who had sold odds and ends to Wyatt for years.

“We’ll have to find the right moment,” Vara added, turning back to the Festival preparation.

As the tinkers finished up their work, entertainers and artisans began to arrive. Fortune tellers, fire jugglers, oni smiths, and more all entered the square, the sun catching their brightly-colored cloaks and gleaming armor. Coslo and Vara watched as they set up shop, practicing their acts and preparing their stalls under the careful eye of the Crownwatch guards.

As the performers gathered, so too did the staring, gawking crowd outside the plaza. The guards held them at bay, but the press of bodies continued to grow.

“Why is everyone watching?” Vara asked, thankful for the cool shade of the alley as the noonday sun burned overhead.

Coslo snorted. “You had performers an’ tutors up in the Spire, yeah? Well us down in the streets don’t. Nothin’ to see except the occasional tavern brawl.” He shrugged. “Little to celebrate when you’re tryin’ to survive. So people are curious.” 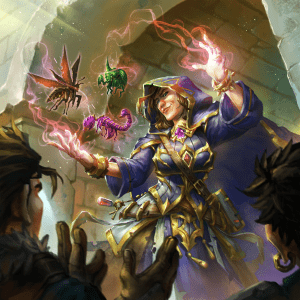 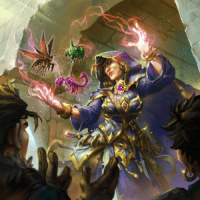 Vara frowned, thoughtful. After a quiet moment, she opened her mouth to speak, but froze as the low buzz of conversation was broken by loud, brash laughter. Coslo and Vara watched as Kaleb pushed his way through the crowd, shoving a small yeti aside as he ascended the steps of the central stage.

“Damn impressive. This will make a fine centerpiece for the festivities!” he said, turning to face the crowd with his arms outstretched.

“Why is Caiphus throwing a Festival of Inspiration?” someone called out from the crowd.

“But what about Vara?” a different voice asked. “She’s still out there, isn’t she?”

Kaleb’s smile sharpened, and the captain of the guard stepped forward, eyes scanning the faces below. But the prince held up a hand, halting the man, and drew the heavy shotgun from its holster on his hip. “She’s welcome to challenge whenever she likes,” he said, voice ringing over the square, “but I wouldn’t bet on it. She ain’t much of a fighter. Neither were her mother’s Clans, from what I hear.”

“That bastar—” Vara snarled as the crowd laughed. As she rose, the shadows around her began to contort and darken, until Coslo put a hand on her shoulder.

Vara scowled, but jerked her head in frustrated acknowledgement, her eyes never leaving Kaleb’s grin, or the steely hunter’s eyes above it.

The ancient stones of the throne room were still cool, and the room itself lit by only a few, flickering torches. Their meager light reflected off Caiphus’ bronze armor as he leaned forward from his seat on the Eternal Throne.

“And you are sure it will work?” His sallow skin tightened in a frown, but his eyes glittered with a cold cunning. 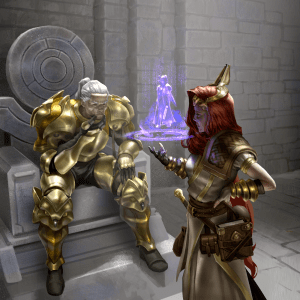 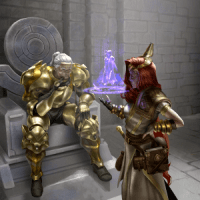 “Yes, brother,” Talir replied, frustration tinging the Arch-Magister’s voice. She stood at the foot of the throne, the edges of her robes shifted and danced, as if caught in a desert breeze only she could feel. “We have been through this. The boy is your blood, and the Throne will recognize it. His strength will be your strength. And more.”

“What has you worried, o king?” his sister asked mockingly, leaning forward on her staff.

Scowling, Caiphus said, “My daughter has yet to be detained.”

“Her? Talir laughed, a bright, sharp sound, like breaking glass. “Vara is a child. She is nothing. Besides,” the Arch-Magister added with a smile. “You have her mother. You know exactly where Vara will be during the festival.”

“Loyalty was always one of Eilyn’s failings,” Caiphus mused. “Vara too, it seems. Very well. I will take some additional precautions. And Talir?”

“Don’t you dare question me like that again,” Caiphus snarled. As he did, the lines and grooves of the Eternal Throne flared with a furious, hissing light. Talir flinched, and looked away.

Dusk was creeping into the main festival plaza when the nightmares arrived. A cohort of valkyries descended on leathery wings, falling into position behind a hulking, armored figure.

“Is everything in place?” Rolant asked, his deep voice carrying a tone of absolute command.

“Yes, commander,” one of his valkyries hissed. “Icaria is meeting with the senior Crownwatch to… impress upon them the importance of the occasion.”

Nothing will stand in Caiphus' way. 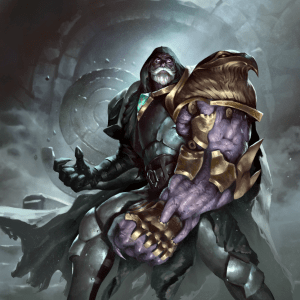 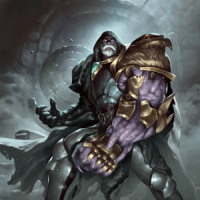 “Very well,” Rolant said, slowly scanning the great square. As he did, his left arm clenched, the joints creaking and popping as it formed a fist. The limb was massive, its skin mottled and grey, though the muscles beneath bulged as Rolant paced. The Iron Tyrant’s gaze briefly landed on the mouth of the darkened alleyway, but its occupants were long gone, escaped back into the slums to prepare.

“Into the air and sweep the area,” he ordered, raising the stinking arm in a heavy gesture. “Curfew is mandatory. Cut down any who argues.” Before the nearest valkyrie could speak, Rolant seized her by the collar, and drew her in close. “The festival and coronation are important to my nephew. Caiphus will usher in a new age for Argenport, and nothing disrupt his plans, is that understood?”

The valkyrie choked out an affirmative and took to the sky, wings flapping unsteadily. The rush of air stirred the heavy cloak and hood Rolant wore, and a sliver of argent moonlight caught the pale scars on his face, and the shards of armor embedded in his pulsing arm.

“Nothing will stand in his way,” Rolant swore. “Nothing.”