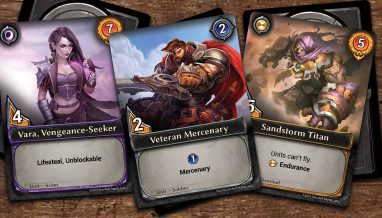 Chronicles of the Throne Designer Diary: Skills and Battle Dynamics

Join us at Gen Con for two Eternal: Chronicles events!

In our previous Designer Diary, we looked at how basic units can provide some early direction in what strategies you’ll pursue in a game of Eternal: Chronicles of the Throne. This time around, we take a look at all the skills that you’ll find on cards and what they bring to the table.

There are nine skills in Eternal: Chronicles of the Throne. Skills are represented by bolded words, each of which carries a meaning defined in the rulebook and on reference cards provided with the game. They are quite easy to remember once you’ve heard what they do, so this allows us to package a lot of gameplay onto cards without using a lot of words each time.

Seven of the skills are used to create interesting battle dynamics:

When a unit with Berserk deals damage to an opponent, double that damage. Units with Berserk are threats that are usually very important for your opponent to deal with, and if you can catch your opponent with their defenses down, or play cards to help your Berserk unit get through, you’ll usually be very happy. From a design perspective, Berserk is a powerful tool because it can create some feel-good attack decisions (not every attack decision need be a tough one) and it can create pivotal, dramatic moments.

The most self-explanatory skill. Units with this skill never have the option to block, so they are purely offensive weapons. Because there’s not a lot of interaction inherent in this skill, in designing the game we use this skill very sparingly. 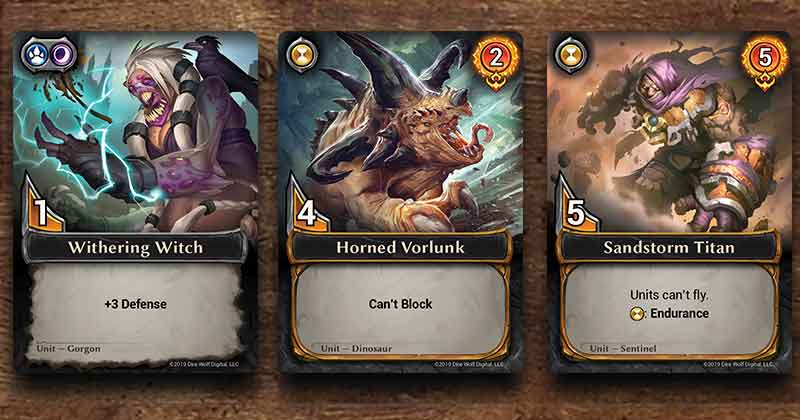 Normally, when a unit blocks an enemy unit, both units are discarded. But a unit with Endurance is not discarded when it blocks, and being able to block and then send that unit to attack your opponent can be very powerful. Sandstorm Titan, shown above, is one of the best brawlers in the game, if you can combine it with another Time faction card on the same turn!

Flying units soar high above the battlefield and can only be blocked by enemy units that also have the Flying skill. Flying units don’t typically pack as much of a punch as their land-locked siblings, but their damage is hard to stop.

When one of your units with Lifesteal deals damage to an opponent, you gain health equal to the damage dealt. There can be a lot of drama associated with Lifesteal attacks, because if they can get through, they have the potential to swing the game more than other attackers.

Another self-explanatory skill, Unblockable is a very powerful ability for units because it simply can’t be blocked. It’s not impossible to deal with such units, but you have to have the right spell(s) for the occasion. Again, like Can’t Block, because this skill is low interaction, it is rarely used. 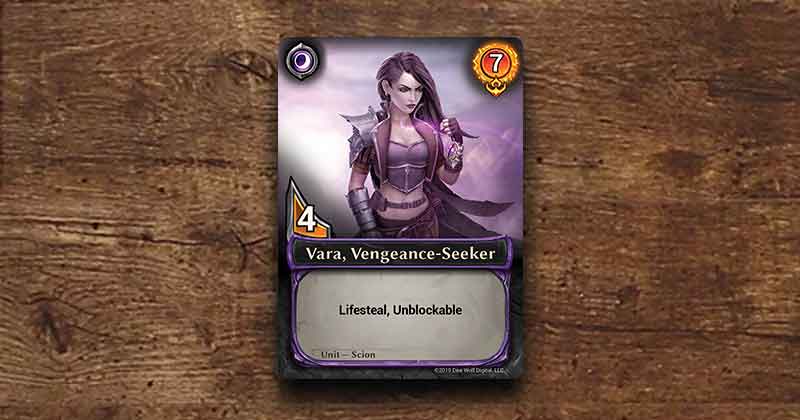 Vara, one of the more powerful cards in the deck, combines the Unblockable and Lifesteal skills.

The two remaining skills don’t impact the battlefield on their own, but can go a long way towards tuning your deck to get the most out of your other cards:

Voidbind is one of the two skills that isn’t associated with battle. Instead, this is a skill that helps you cull your deck, making it smaller and more efficient. When you play a card with Voidbind, you may banish a card in your hand or discard out of the game entirely.

The final skill is not associated with battle, and this skill is only found from the stack of Veteran Mercenaries that accompany every game. When you play a unit with Mercenary, you may choose any one faction to activate. Veteran Mercenaries can be very useful if you’ve found yourself acquiring an assortment of cards from many factions, and some of those cards have faction abilities. For example: 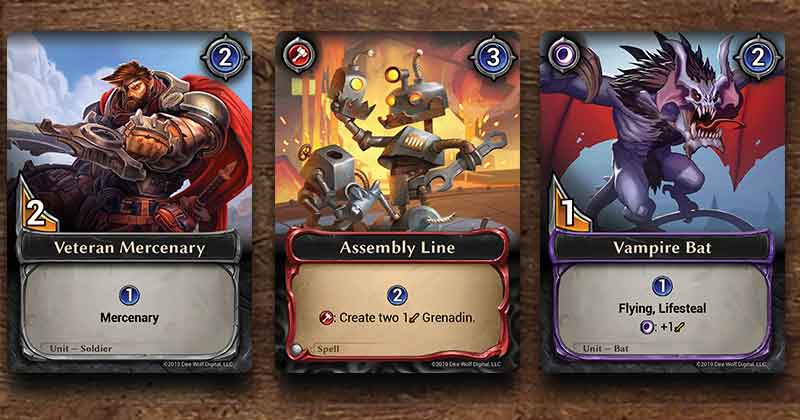 A Veteran Mercenary can be used to provide a boost to Assembly Line or Vampire Bat, but not both in the same turn.

Eternal: Chronicles aims to blend deck-building with the tactical roots of card battlers like Eternal. In the next designer diary, we’ll be exploring the kitchen table warfare of multiplayer combat, and our approach to supporting more than two players.