In our previous Designer Diary, you read how CLANK! Adventuring Party opens up the game for as many as six players. But there’s even more to this exciting expansion. It also includes six custom characters you can play – whether you’re adding more players or still gaming with 2 to 4. Each character features its own gameplay, a unique 10-card starting deck, and a character board with a special power.

If you’re a purist and want a six-player game where everyone starts out the same, we’ve got you covered: the expansion includes two regular 10-card starting decks, identical to the four in the original game. But with six entirely new ways to raid a dragon’s lair, these new characters offer fresh strategies for play after play after play. 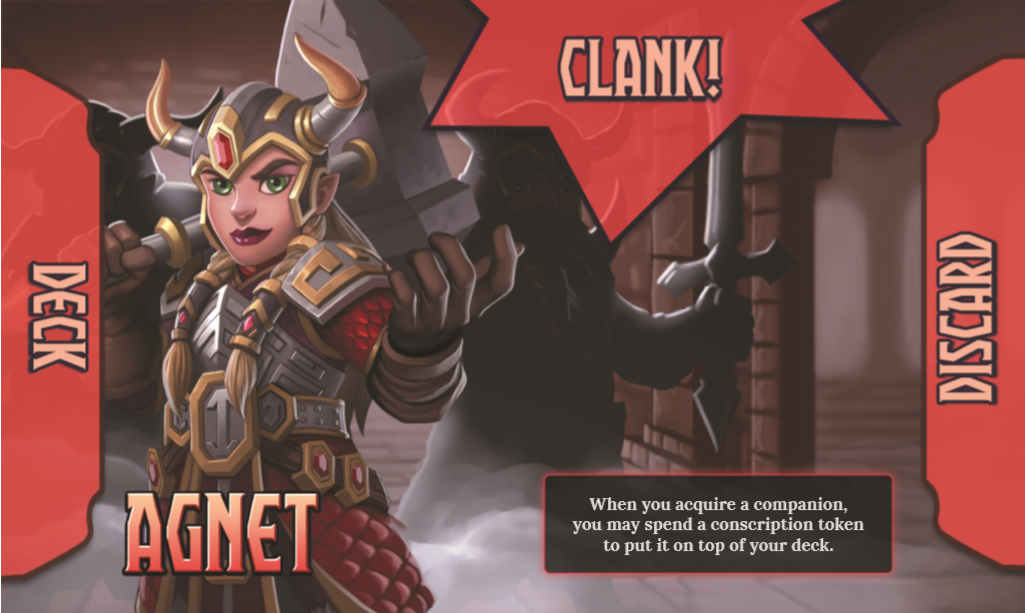 Meet Agnet, proud warrior leader serving the Mountain King. Like the Dwarven Rebels you’ve seen in other CLANK! products, she’s all about companions – but she has some new tricks the rest could only dream of.

Agnet begins the game with four conscription tokens to use throughout the game. Whenever you acquire a companion card, you can spend one of those tokens to put the companion on top of your deck instead of in your discard pile. Where you’d normally wait to empty your deck, reshuffle your discard pile, and eventually draw your exciting new companion, a conscription token gets them in play on your very next turn. (Even sooner, if you time it when you’re about to draw a card!) 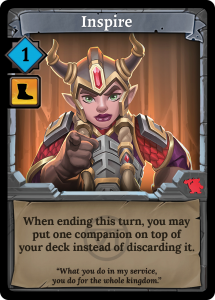 You may eventually run out of conscription tokens, but another trick in your deck will keep coming up again and again. When you play Inspire, you can end your turn by taking one companion you played and putting it back on top of your deck. This can be your way to guarantee Skill or Swords or Boots next turn. Or you can set up a combo with a card-drawing Rebel or stealthy companion who removes Clank. Then again, it may be as simple as playing your most expensive, most powerful companion on two back to back turns! When it comes to companions, Agnet gives you a lot of flexibility. 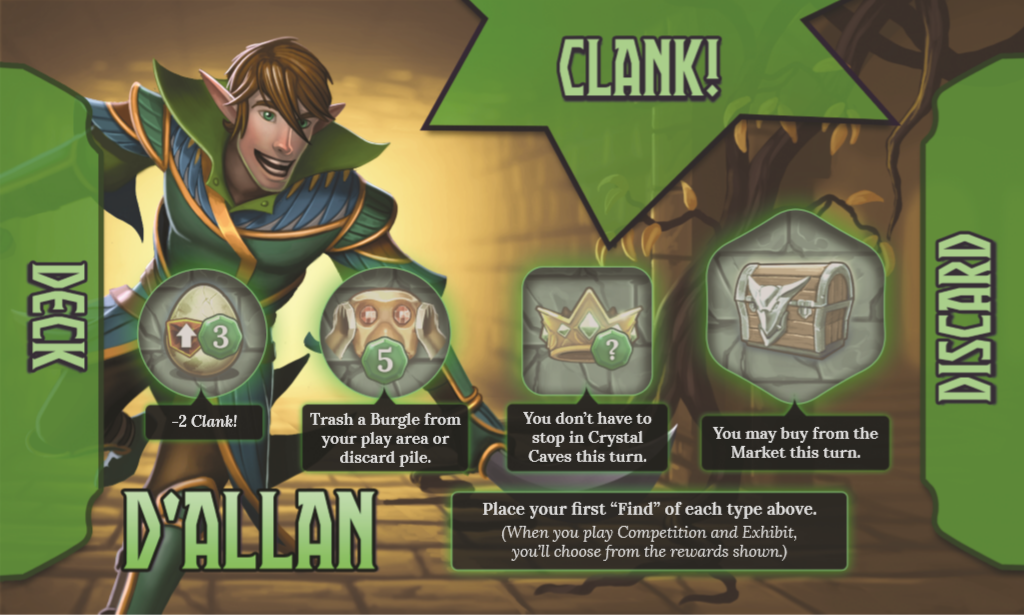 D’allan the Elf was chasing treasure long before all these thieves decided that the way to prove your skills was to run around a dragon’s lair. So when it comes to grabbing the best loot, he has some expert techniques. 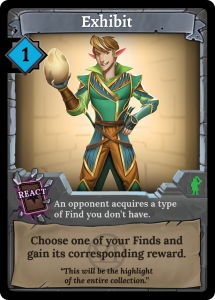 D’allan is looking for four types of “Finds”: a dragon egg, a monkey idol, a crown, and an artifact. You place the first one of each on your character board, where different cards in your deck, like Exhibit, then trigger the board’s rewards. Different Finds open up different strategies. You can speed straight to a monkey idol to quickly rid your deck of basic Burgle cards, or grab one artifact and then set up for another by buying a backpack without walking back to a market. And there are still other tactics for you to discover.

You may have noticed the React on Exhibit, which triggers when opponents beat you to any of your Finds. (If you need a refresher on how React works, check out the previous Designer Diary!) Every character in CLANK! Adventuring Party starts with a React card, but being quick-on-his-feet is kind of D’allan’s thing: his 10-card starting deck has three!

Carnage for Fun and Profit 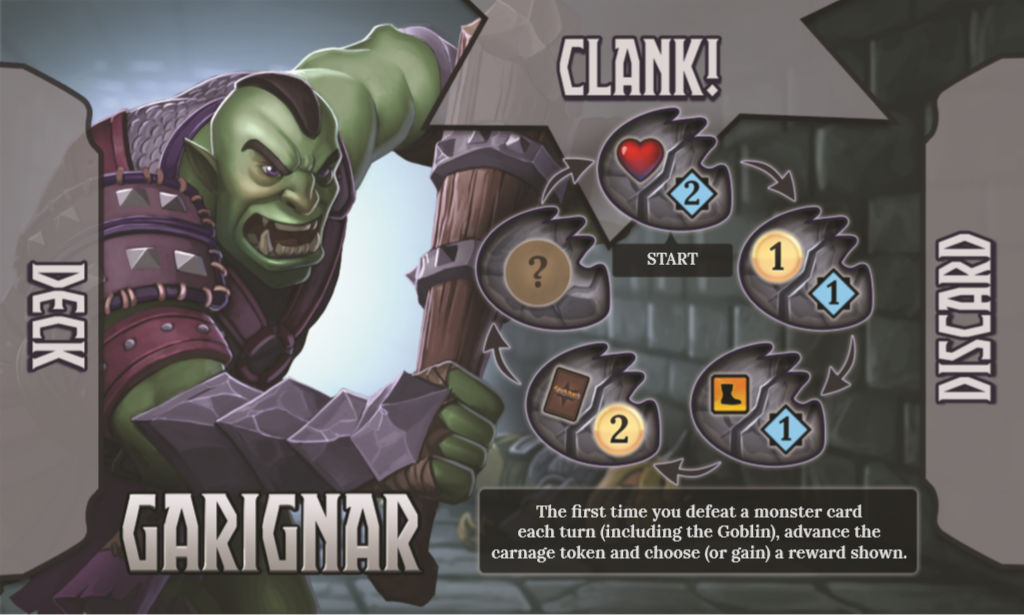 At the start of the game, you place a carnage token on Garignar’s character board. On every turn that you defeat a monster card (including the Goblin), you advance that token and take a bonus reward. (Usually it’s your choice of two different options, but in one case, it’s a minor secret straight from the bank!) 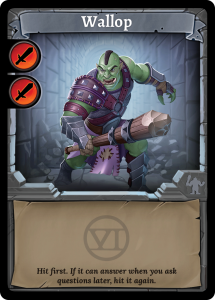 Garignar does have some flashy cards with game text in his starting deck, but the truth is that his most exciting might just be the simplest: Wallop. Normally, you don’t start with ready-to-use, guaranteed Swords in your deck; you have to pick up something like a Mercenary before your first reshuffle, and then you might get to use Swords on your third or fourth turn of the game. Not for Garignar. With a 2 Sword card in the mix right from the get-go, he’ll get first crack at any heads that need cracking (and start gaining those carnage token bonuses right away)! 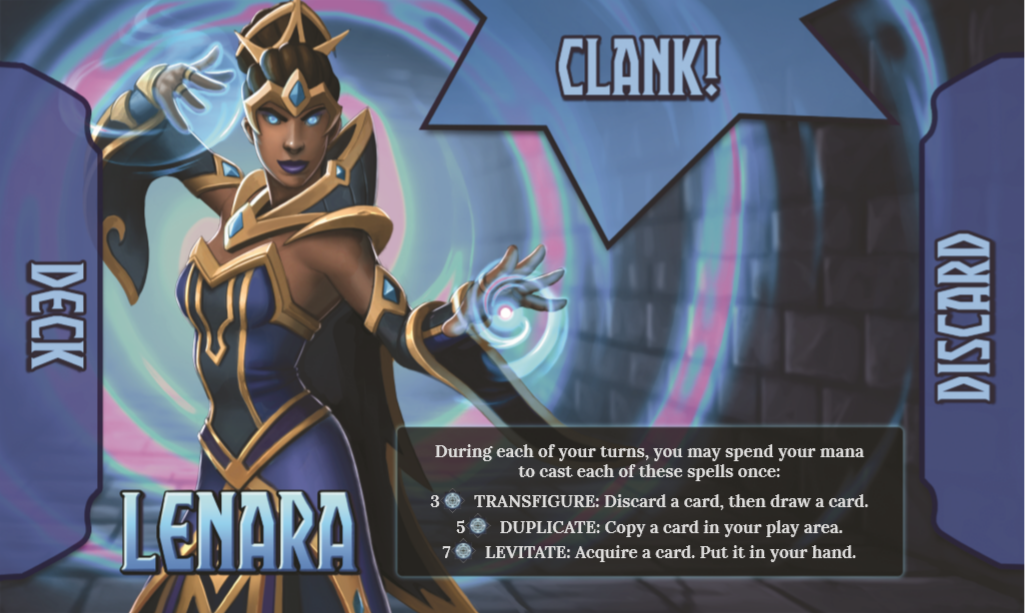 Thieving isn’t just for thieves. The mage Lenara is up for a little smash-and-grab too. Naturally, though, she’s going to use her special talents. 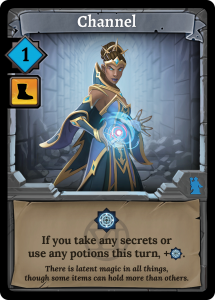 Lenara begins the game with 10 mana tokens you set next to her character board. Whenever you play a card like Channel, you gain mana, placing those tokens right on the board where you can then spend them. Lenara has three spells you can cast from her character board, using increasing amounts of mana for increasingly powerful abilities. Spend small to tweak your hand, bigger to double your best card of the turn, or most of all to acquire a card for free and play it immediately!

While she has a few ways in her deck to build mana, Lenara is limited to the 10 tokens. So spend it for something cool, then you can start earning more for something else cool later down the line. And watch for another fancy spell on one of Lenara’s cards that doesn’t take any mana at all! (It just comes naturally to some people.) 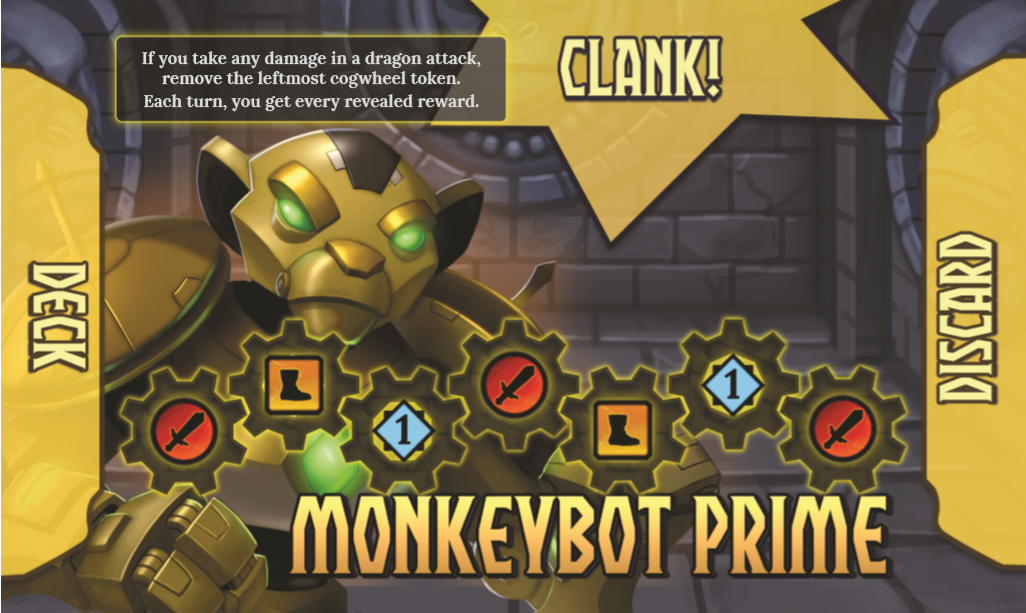 You’ve seen the MonkeyBot 3000, and have even run around the dungeon with it in a storm of Clank! and card drawing. But there’s an even more imposing remnant of the Ape Lords’ lost civilization: the MonkeyBot Prime.

The seven spaces of MonkeyBot Prime’s character board start the game filled with cogwheel tokens. Whenever you take damage in a dragon attack (any amount of damage), you remove the leftmost token from the board and return it to the box. For the rest of the game, every exposed icon is added to your resources on every turn you take. As the game proceeds, MonkeyBot Prime will have guaranteed Swords, Boots, and Skill on every turn, on top of the cards you play. 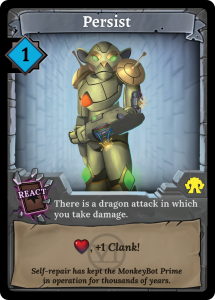 To maximize this power when you play MonkeyBot Prime, you’ll actually want to make some Clank! and take some damage. The starting deck gets you going with Persist – it Reacts to the hits you take, helps you take more by adding Clank!, and heals the damage to keep you going. This character runs strong but also fast. Look for more cards in its deck give you powerful advantages… while sometimes extending your level of risk. 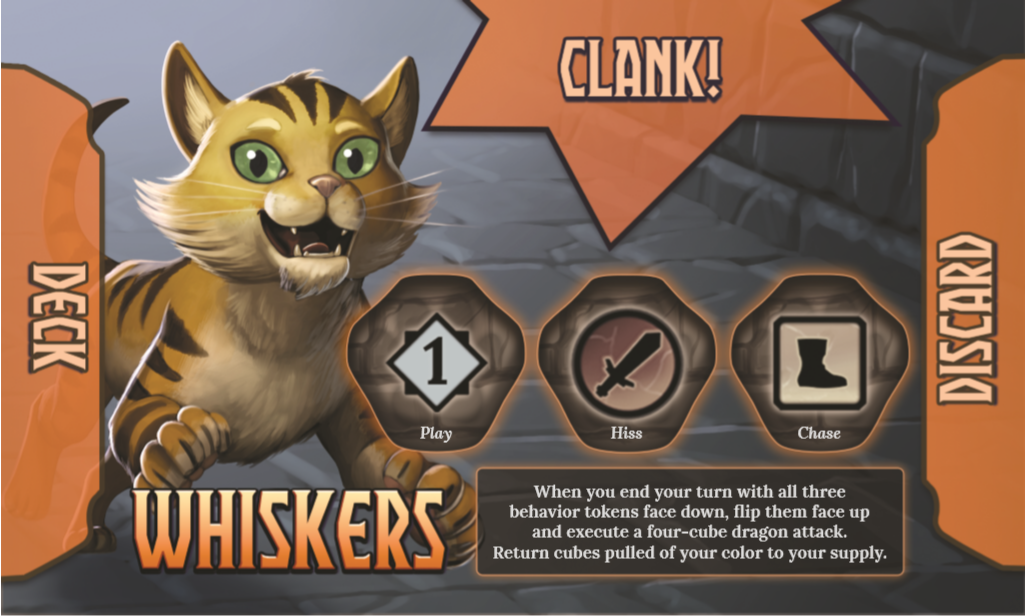 He’s a cat. And a professional thief. Feel free to ask him how that works, but don’t expect an answer. He’s a cat. 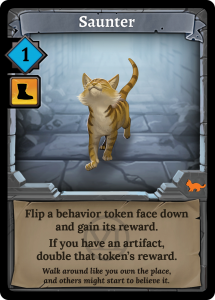 Whiskers begins with three behavior tokens face up on his character board, each showing either 1 Skill, 1 Sword, or 1 Boot. Different cards in his starting deck play to flip one of those face down. At first, this lets you choose just which extra resource you might need this turn. But once you’ve flipped all three face down, you reset them at the end of your turn and the real mischief happens.

When you flip Whiskers’ three tokens face up again, it triggers an extra dragon attack of exactly 4 cubes (regardless of the dragon’s rage level). This attack may be alarming to your opponents, but is of no concern to you: any cubes of your color that get pulled from the bag return to your supply without causing you damage.

Six characters, six distinctly different ways to play CLANK! You’ve seen highlights of each, but there are still more abilities to discover on the other cards in their decks. (And yes, a couple of Stumbles too. Into every thief’s life, a little Clank! must fall.)

CLANK! Adventuring Party is coming soon to your friendly local game store. Room for six players! Cards you play even when it’s not your turn! Tricky choices the whole group must make. And six new characters with unique powers and strategies. It’s time to head back to the dungeon!

For more information on CLANK! Adventuring Party and how to reserve your pre-order copy today – check out the official page!