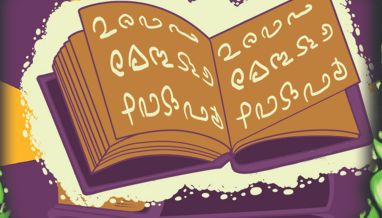 A Note Regarding Spoilers (or the Lack Thereof)

Clank! Legacy: Acquisitions Incorporated is – as the title cunningly suggests – a Legacy game that includes a story-driven 10 game campaign.

Writing a design diary for a Legacy game is tricky, because so much of the gameplay is unlocked during the course of playing, and discovering those mysteries is a big part of the fun. So, please note that for this design diary, I will not be spoiling anything that you wouldn’t discover until you actually started taking turns in the first game. That is, I’ll restrict myself to talking about the stuff you can see and read when you open the box up to and including a little bit of game 1 setup.

I’ve written in the past about how Clank! was heavily inspired by my experience with Dungeons & Dragons in the 1980s. Clank! is designed to feel like a dungeon delve in an RPG adventure. Because of these roots, it was natural that we at Dire Wolf Digital had been considering some kind of Clank! Legacy version for a long time, where over the duration of the Legacy campaign the players experience an epic adventure akin to the experience of an RPG campaign. And that’s what Clank! Legacy: Acquisitions Incorporated does.

What is a Legacy board game?

A legacy game is one in which players unlock new rules and game components over time. Often – and is the case with Clank! Legacy Acquisitions Incorporated – players will make permanent modifications to the game by applying stickers, opening sealed envelopes, destroying cards, etc. Legacy games typically have a campaign experience that can only be played once. Some Legacy games can’t continue to be played after that campaign is finished. Others, including ours, can continue to be played after completing the campaign.

Early in the project, Andy Clautice and I laid out the overall structure of the game experience. We worked together for a solid few months to form a strong game skeleton. Thereafter came the laborious work of complete all the connective tissue that really brings the game to life. But within the first few weeks of testing our initial ideas, we came to realize a few important design pillars for the product:

Let’s take each of these pillars one by one.

We wanted the game system to act almost like a good game master in an RPG campaign. One of the earliest decisions I made to achieve this goal was to take Clank! out of the dungeon. I did grow up playing and enjoying Wizardry on my Apple ][, and I was perfectly happy as a 13 year old adventurer delving into the same dungeon underneath the town for hours upon hours. But that type of repetitive dungeon dive has fortunately been long forgotten and pushed aside for epic stories that allow players to traverse much larger areas, which allows for more interesting stories to be experienced. So we abandoned the classic side-view dungeon as seen in Clank! and went to an overhead view of a large regional landscape. This gave us a much richer palette for telling a bigger adventure story. 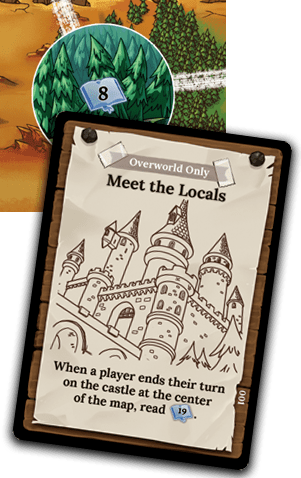 We wanted to not only tell a fun and immersive storyline, but we wanted non-linear advancement so that players could feel like they had a good deal of agency on how their particular story played out. To this end, we devised a few primary tools: the Book of Secrets, Waypoints, and Contracts.

The Book of Secrets contains the narrative of the story and is broken up into many numbered entries. Different groups will encounter the story in different ways, depending on how they interact with Waypoints and Contracts.

Waypoints are simply numbered spaces on the game board. When a player enters such a space, they read the corresponding entry from the Book of Secrets.

When players first open their box, they will discover a double-sided map with several Waypoints on either side. The map also has various unexplored sections that players can reveal during the course of the campaign.

Contracts are a new type of card unique to Clank! Legacy. The example card shown here is given to the group before game 1 begins. The group will continue to receive Contract cards throughout the course of the campaign. These cards can remain outstanding across games. Often, a group is presented with more Contracts than they can (or care to) complete within a given game, so players have agency in how they prioritize them. Remember that Clank! Legacy Acquisitions Incorporated at its heart is a competitive game, so players will sometimes prioritize strategic scoring over story reveals.

Throughout development, we kept an eye on how quickly groups tended to complete Contracts and reach the various Waypoints on the map, and adjusted the cadence of introduction so that players wouldn’t be overwhelmed with too many goals at any one time. We also spent a lot of time tinkering and balancing the rewards for completing Contracts and pursuing story-based goals. If the rewards we gave out were paltry, players might feel disappointment and be discouraged from pursuing story goals later. On the other hand, we didn’t want to make these rewards so large that it overshadowed other strategic efforts.

In our design team’s research into other Legacy games, we discovered that we really enjoyed the games where new and meaningful mechanics are regularly introduced. We also wanted to avoid really long campaigns, because getting a regular group together to get through a long Legacy campaign was a turnoff to a lot of players. Because our structure allowed for the campaign to end with two different maps that players could continue to play as much as they liked, we figured that if we were to err on one side or another, that being on the short side was preferable to outstaying our welcome with a long campaign that felt like a grind to finish.

As PA told us when we were first discussing a partnership, Acquisitions Incorporated’s tone pretty much lines up perfectly with Clank!’s. The Dire Wolf design team included some longtime Acq Inc fans who dove into their video archive to learn even more about the details and tonal nuances, and we were delighted to find a world very well suited for an epic Clank! tale.

Finally, the contributions from the two Penny Arcade creators were outstanding. Mike Krahulik provided a gorgeous piece of art for the box cover, and his style served as a guide for our card artists. Unfortunately, Holkins barely did anything at all. Just kidding! Jerry not only worked closely with us on every iteration of the Book of Secrets, massaging as necessary, but he contributed all the flavor text written on the game cards!

Legacy games are difficult to build, but they are in some ways a board game designer’s dream: Game designers usually have lots of ideas; but good game designers are aware that putting too many of your ideas into a single game can be overwhelming compared to a world where you had shown restraint. With a Legacy game, similar to a video game, you can slowly trickle complexity at players, leveraging the fact that players are going to be more and more familiar with the basic rules because of the amount of plays they get in via the course of the campaign. This build-up of game mechanics allows a Legacy game to have a higher complexity ceiling, which can translate to “we get to put in this cool mechanic” rather than “it’s cool, but it’s too much.”

One technique I used in planning out the campaign was to build out the endgame early. Within the first two months of design, we had a “fully loaded” map to test what would be the rough equivalent of the final game, using all the new mechanics that we had invented by that time. I won’t spoil anything about the specific mechanics used, but because the playtest was largely successful – it felt like a complex and satisfying conclusion to an epic story – it did serve as a nice “goal post” for us to aim at. We knew what our destination looked like and we knew that we wanted to limit the campaign to “around ten” games, so we were able to roll out both mechanics and story in a satisfying way, all leading toward that epic conclusion.

This pillar overlaps with the previous two. The idea here is that part of the fun immersion of a Legacy story is that the pieces work together in harmony; it’s not just random games and stories tied together. And also that mystery and anticipation is a powerful tool in the design toolbox. If the game can tantalize players with ideas that imply – or foreshadow – more things to come, it reinforces both the adventure/mystery story and the fun mechanical progression that comes along with the game’s mechanical unlocks.

From the moment when players first open the box, the psychology of this pillar start to take hold. You see an incomplete map (not to mention you know that there’s a second side of the map that will come later). You see a Book of Secrets, and a mysterious “Cardporium.” The rulebook has numerous blank spots where stickers will be applied later. We’ve experienced some of these concepts with other Legacy games and absolutely love the experience.

With some of the first mechanics we designed for Clank! Legacy Acquisitions Incorporated, we tried to embed that sense of mystery and anticipation into some of the game components that you see immediately before game 1 begins. One of them was a success and never changed, and another was a bit of a failure at first, but we eventually improved upon it.

Let’s start with the success. I wanted a component similar to Clank!’s monkey idols. In Clank!, these are simply reward tokens located in a space on the map you can visit to pick one up. The token is worth some points, but even more interestingly, you can sometimes draft a card from the dungeon row that is more powerful if you have a monkey idol, giving that player a sub-goal of making their way to the monkey shrine. With Clank! Legacy Acquisitions Incorporated, I proposed Mystic Fruit. Here’s what the rulebook tells you about it:

So, what was the failed mechanic that I pitched? Let’s go backwards, starting with where the mechanic ended up:

My first version of this mechanic tried to be sneaky. I proposed that several of the spaces on the board would simply look different from the other spaces. I suggested that they look like canyons. I was excited by the prospect of players eventually unlocking cards that would interact with these spaces and having an “a-ha!” moment of discovery that the specific look of each space actually meant something. But for both practical gameplay reasons and storytelling reasons, the canyons just weren’t a big hit. The sneaky approach in trying to make them look unassuming meant that they weren’t easy to spot, and canyons didn’t tie well thematically to the game effects that I wanted to see on the corresponding cards. So we changed them to magic circles, which addressed both of those problems. The general idea of including some sneaky stuff in the game wasn’t completely eliminated, but this particular mechanic was better off as another clearly mysterious element that foreshadowed things to come.

To go deeper on the design process behind the game would require spoilers, and we wouldn’t want to do that. So for now, we’ll say farewell, and get ready to begin your own Clank! Legacy Acquisitions Incorporated adventure later this fall!

Paul is the Creative Director of Dire Wolf Digital and creator of Clank! He served as Design Director for Clank! Legacy Acquisitions Incorporated.