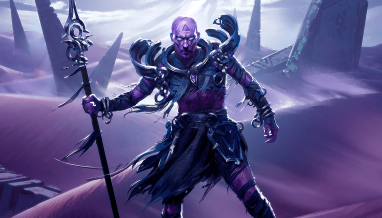 This morning’s update to the Eternal Draft Pack is kind of a big one, not only changing up The Flame of Xulta draft format, but also adding 40 cards to Expedition (listed below). As with the previous couple of sets, we wanted to revitalize draft, in order to shift the balance of power among various strategies and faction combinations, as well as present The The Flame of Xulta in a new light.

In addition to adding forty cards to the draft packs, we’re greatly changing up which cards are spotlighted. We’re also increasing the weighting of those spotlighted cards from 3x to 5x, in order to provide more definition and better emphasize the supported themes. The full list of Draft Pack cards and which are weighted is here.

Finally, as with previous draft remixes, we’re swapping the pack order, so packs will be opened:

While we have changed the weighting of numerous cards, we are not removing any cards at this time, as we do not want to make players’ Expedition decks illegal midway through the season. Our intention is not to remove anything from Expedition until the next major set’s format reset. The 40 newly added cards have been selected to not only to help facilitate new draft experiences, but also with an eye towards adding many exciting new options to the Expedition format that speak to the themes present in The Flame of Xulta and the recently added Trials of Grodov.

We’re excited to see how both formats evolve when these changes go live later today!