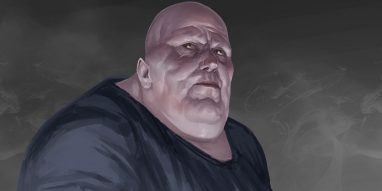 What has mood to do with it? You fight when the necessity arises–no matter the mood! Mood’s a thing for cattle or making love or playing the baliset. It’s not for fighting.

The leftmost Conflict is a Skirmish that could only be revealed on the first round of the game. Whichever player wins the Skirmish earns a Victory Point. The player who comes in second earns an Intrigue card and 2 Solari. If it’s a 4-player game, there is a third place prize of 2 Solari, but in games with fewer than four players, there is no third place prize. (War is not kind to the losers.)

The Siege of Carthag to its right looks quite similar to Skirmish but it’s significantly more valuable. The winner gets to take control of the Carthag space on the board. When you take control of a space, you place one of your control markers on the board just underneath it. From now on, whenever any player (including you) sends an Agent to Carthag, you gain the control bonus indicated on the board. For Carthag, the bonus is 1 Solari. 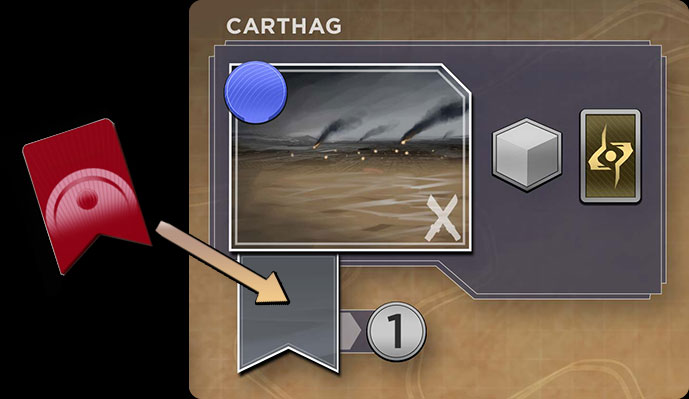 Another benefit of controlling a board space is that you’ll receive a defensive advantage if a battle for that space comes up later in the game. There are three spaces on the board that can be controlled: Carthag, Arrakeen, and the Imperial Basin. All three of these cards have corresponding major battle cards shuffled near the bottom of the Conflict deck. It’s very likely that one or two of these battles will happen in the game, but it is possible that the game will end before the third. In any case, each one of these major battles is worth 2 Victory Points, so the struggles for them tend to be vicious.

Fight now? Or wait for a better moment?

Each round’s Conflict is essentially a free-for-all; anyone can fight for the spoils of war. How players participate in battles and whether they want to is where things get really interesting. You’ll need two things to fight: troops and the ability to deploy them. Each player starts with three troops in their garrison but can recruit more from their supply to the board. Deploying them to the Conflict area requires sending Agents to combat spaces.

The general rule is this: When you send an Agent to a combat space, you may deploy any troops you generate on that turn plus up to two more from your garrison to the Conflict area. You are not required to deploy them to the Conflict and sometimes it is prudent to hold back. If two or more of your rivals are already engaged in a bloody battle, it might be best to stay out of the fight and conserve your troops to fight another day. Because the other notable rule about fighting is this: All troops in the Conflict will be destroyed and returned to players’ supply areas.

One thing that these rules do is give a strategic advantage to the player in the last position each round, because that player has more information about what their opponents are doing. But, on the other hand, being last in turn order means you might not get to send Agents to the spaces you want, so it’s not a clear-cut advantage. This is one of the key tensions in the design that I’m most proud of, as it retains some of the standard aspects of worker placement games (going first is good!) but inserts an opposing mechanic (going last is good!) which gives the game a familiar-yet-novel feeling.

There is a sort of powerhouse space on the board as relates to combat – the Heighliner space. A heighliner is an extremely large Spacing Guild vessel that can carry entire fleets and armies from one star system to another. To represent the Spacing Guild’s extraordinary capabilities and extraordinary spice needs, this is what that space looks like: 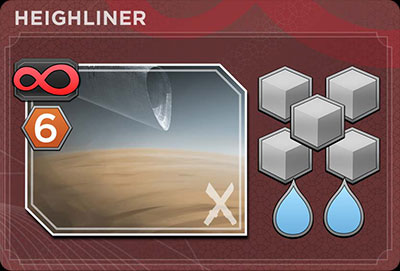 For 6 spice (which is a lot of spice in Dune: Imperium), you can hire a Heighliner to bring 5 troops from your supply to Dune. (You also gain 2 water, as surely you would take advantage of the opportunity to bring that extremely desirable resource to the planet.)

The Heighliner is the one combat space on the game board that is not on Dune, again representing the Spacing Guild’s transportation capabilities. So, whenever a player has 6 spice, you need to beware their ability to suddenly enter the Conflict with a massive army. And when multiple players have 6 spice, things get really interesting, because if one player uses the Heighliner, the other player is then blocked from it for the rest of the round. But, generally speaking, you’d rather use the Heighliner later in the round, so that you can bring in your army to defeat other players who already committed forces and not telegraph your attack. So, do you wait? Or do you commit early? 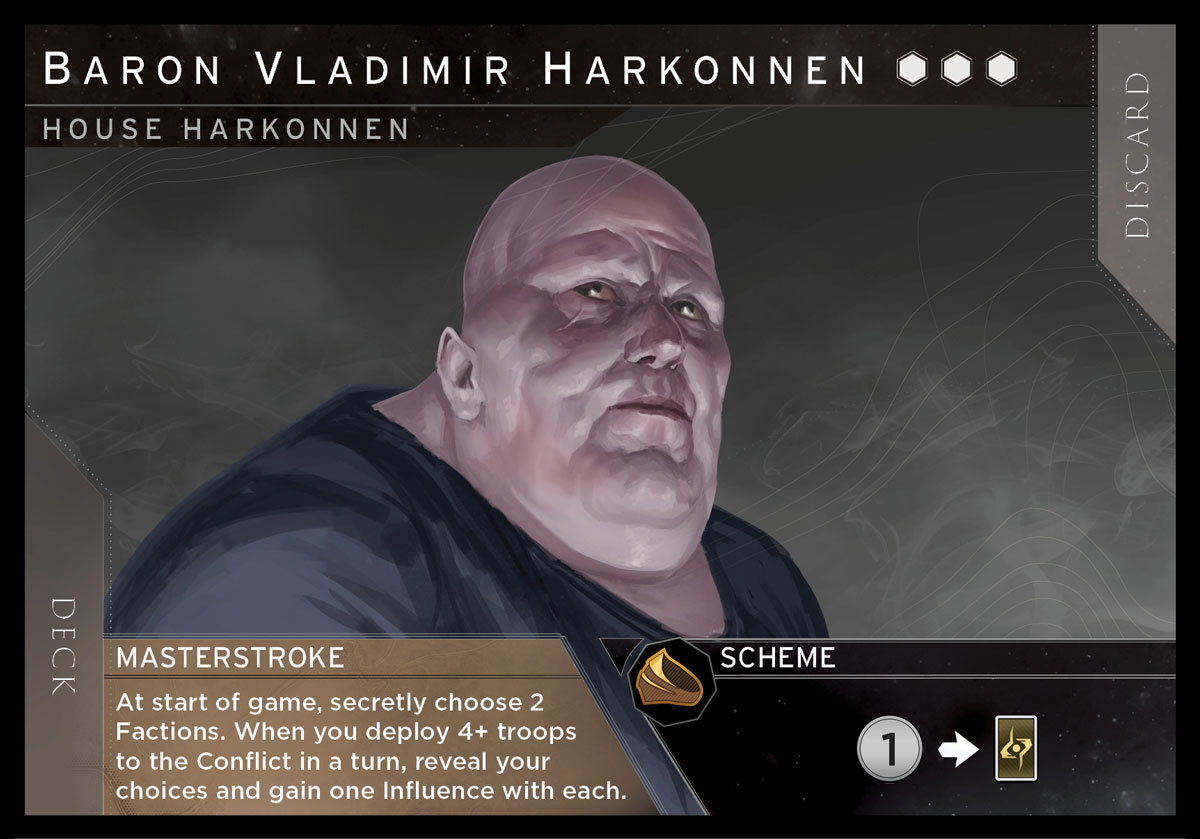 If Baron Vladimir Harkonnen is in the game, the Heighliner has added interest. The scheming Baron has a “Masterstroke” ability that he can trigger if he deploys 4 or more troops to the Conflict in a single turn. While the Heighliner space isn’t the only way the Baron can pull off this plan, it is surely the simplest way.

The other thing that makes combat decisions interesting is that you don’t know what cards are in your opponent’s hand. You might be afraid of an opponent with 6 spice to hire a Heighliner, but do they even have a Spacing Guild icon in their hand? This uncertainty adds a sense of drama to the game which makes it unlike most worker placement games where your opponents’ options are public knowledge.

There are also cards you can play to deal with your opponents’ more troublesome options. 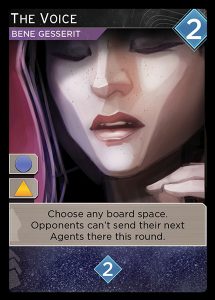 Have you acquired some Bene Gesserit cards? The Bene Gesserit have a mind-controlling power called the Voice. In Dune: Imperium, that ability is represented by a card that can prevent your opponents from sending their Agents to a board space of your choice. It can be useful for setting up your next play or from blocking a space that you suspect an opponent is going to take with their last Agent. 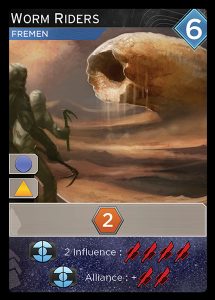 Are you on good terms with the Fremen? The Fremen have the most powerful Reveal effects in the game that can affect combat. We haven’t discussed this type of effect yet; here’s how that works: Your combat strength is first established by the number of troops you have in the Conflict, but when you take a Reveal turn, you add any Sword icons you revealed to your combat strength. So, if you’re holding Worm Riders in your hand and you’ve convinced the Fremen that you’re a worthy leader, you can count on a massive combat boost when it comes time to reveal your hand. This again goes back to the drama inherent in holding a grip of cards that your opponents can’t see. Is your opponent holding onto Worm Riders, or are they bluffing? You may find that some aspects of Dune: Imperium have a poker-like feel to them, as you look around the table and try to read your opponents and what cards you think they might be holding. 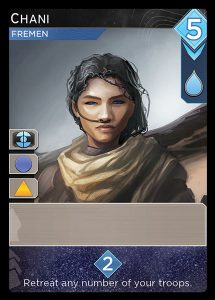 Fremen have some other combat tricks up their sleeve, as well. Chani, for example, can get your troops out of a bad situation, or lure your opponent to squander a large force for a pyrrhic victory.

Which cards do you acquire? Where do you send your Agents? When do you commit to a battle?

There are many paths in Dune: Imperium, and many strategies that may lead to either glorious victory or total defeat. Begin crafting your plans within plans with other players by joining the conversation on BoardGameGeek and the Dire Wolf Gaming Discord.