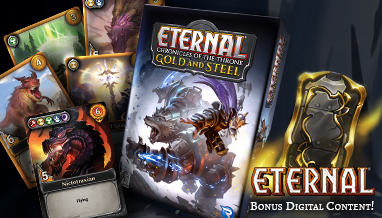 Eternal: Chronicles of the Throne: Gold and Steel Design Diary 2

Last time, I talked about how the design goals of Eternal: Chronicles of the Throne: Gold and Steel wanted to add the element of surprise, as this can be a type of mechanic and a type of excitement missing from deckbuilding games. The inspiration of how specifically to implement that element of surprise came directly from the Market mechanic in Eternal, Dire Wolf Digital’s online card battler.

This week, we’re going to take a look at the secondary mechanics that were designed to support and emphasize the core Market and Gold mechanics. Just like the Eternal design team looks for synergistic mechanics to bring to bear in each of Eternal’s sets, I wanted to take that same approach for Gold and Steel. I thought a lot about the types of cards that could work better because of the addition of Markets.

Searching for the Second

One mechanic that I wanted to try was one that I had already tried to put into the original set, but ultimately we had to cut it for various reasons that I’ll touch on in a bit. The mechanic was weapons. As we tested weapons with Gold and Steel, we got excited because we found that they worked much better within the Market-enhanced game environment. Before explaining why, let’s go over what weapons are and how they work in Chronicles:

Let’s take a look at a weapon: 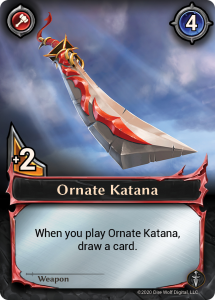 Each weapon has a strength bonus; in the case of Ornate Katana, it provides +2 bonus strength to its wielder. How you use this strength bonus is up to you. You might want to attach it to a Flying unit, to give it the best odds of dealing damage to your opponent. Or, you could argue that because of the way that combat works in Chronicles, you’d rather attach it to one of your ground-based units, to make it harder for your opponent to block. A weapon played on a Berserk unit can be extremely scary, as the strength bonus will effectively be doubled! In a way, a similar thing happens when you use an Endurance unit to wield a weapon – the unit becomes a better blocker and a better attacker.

Let’s track back to discuss why we think weapons work better in Chronicles when you have Markets at your disposal. Weapons bring a sort of combo nature to the game, in a way that goes beyond the combos inherent in the core game. Certainly, with the core game, there are lots of fun combinations of cards you can find, but what if we look at the floors and ceilings of how those combo pieces work: floors being “worst case scenarios” and ceilings being “best case scenarios.”

For example, when you add two units to your deck with the hopes that you’ll draw them on the same turn (their “ceiling”), you are also considering how they’ll perform when you don’t draw them together, because with the way shuffled decks work, you know that the ceiling is certainly not guaranteed, and may not even be close to a 50% chance. The floor of two units is, generally speaking, not that bad. Each unit can work on its own and usually has the ability to block and the ability to attack.

Looking at the floor of a weapon, we can see that it can get much worse. Let’s take a look at another weapon card in Gold and Steel as an example, the Crystal Dirk: 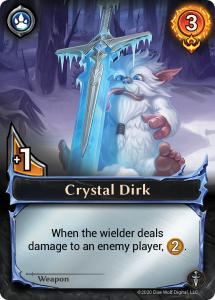 Let’s imagine a turn where you draw a Crystal Dirk with a Veteran Mercenary. You attach the Dirk to the Mercenary, bringing his strength from 2 to 3. Now, let’s imagine that your opponent draws any 3-strength unit and blocks your Dirk-wielding Mercenary. Oops. In CCG parlance, this is typically called a “two for one” and you were on the bad end of the equation – your opponent used one card to thwart two of your cards.

While we can all recognize that the floor of weapons is lower than other types of cards, it’s not all bad. It actually sets them up to have higher ceilings and increase the excitement level of the game. Let’s talk a little bit more about Crystal Dirk, too.

First of all, that special ability is really exciting. In the last designer diary, we revealed several cards that can make Gold, and none of them are as efficient at making Gold (in terms of how much power you have to spend for the card) as the Crystal Dirk. Furthermore, Chronicles offers game mechanics that allow players to avoid the floor cases.

The Crystal Dirk has a warp icon, so you can spend a warp token to buy it and attach it immediately to a unit that you think is going to be able to get through to your opponent. Furthermore, when you next draw your Crystal Dirk, the Market mechanic in Gold and Steel gives you even more finesse and control to avoid the floor and aim for the ceiling. Here’s a card in Gold and Steel that has been known to wield a Crystal Dirk or two in our developer playtests: 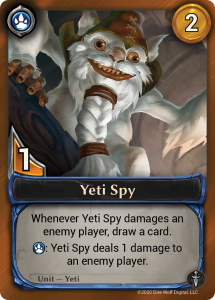 Did somebody say “c-c-c-combo?” If you’re sitting on a Yeti Spy in your Market and buy a Crystal Dirk, you’re in for some fun. As always, the timing rules in Chronicles are “player decides” so you’re allowed to do this:

And if Yeti Spy gets through unblocked on its attack, I’ll draw another card and gain another two Gold! Hopefully, this establishes that the ceilings for unit-weapon interactions are indeed sky high, and explains why the Market mechanism in Gold and Steel allows the weapon mechanic to shine in a way that it didn’t when we tried it in the original set.

Another new mechanic introduced by Gold and Steel is double-influence abilities. These are much more straightforward than weapons, and you can probably guess how they work from just seeing a card example: 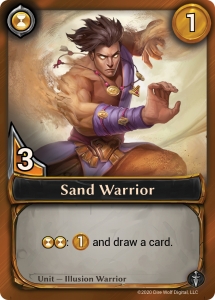 This is really just a natural step from influence abilities from the core set: if you play at least two other Time cards on the same turn that you play Sand Warrior, you gain 1 Gold and draw a card. There is a full cycle of these cards (one for each of the game’s five factions), and they’re all found in the Market deck. They work best as Market cards that you draft at the start of the game, because they give you a goal for pursuing card purchases from the forge deck. As discussed in the first designer diary, we wanted a variety of cards that would give you different goals so that your experiences would vary from game to game. Here are a couple more cards from this card cycle: 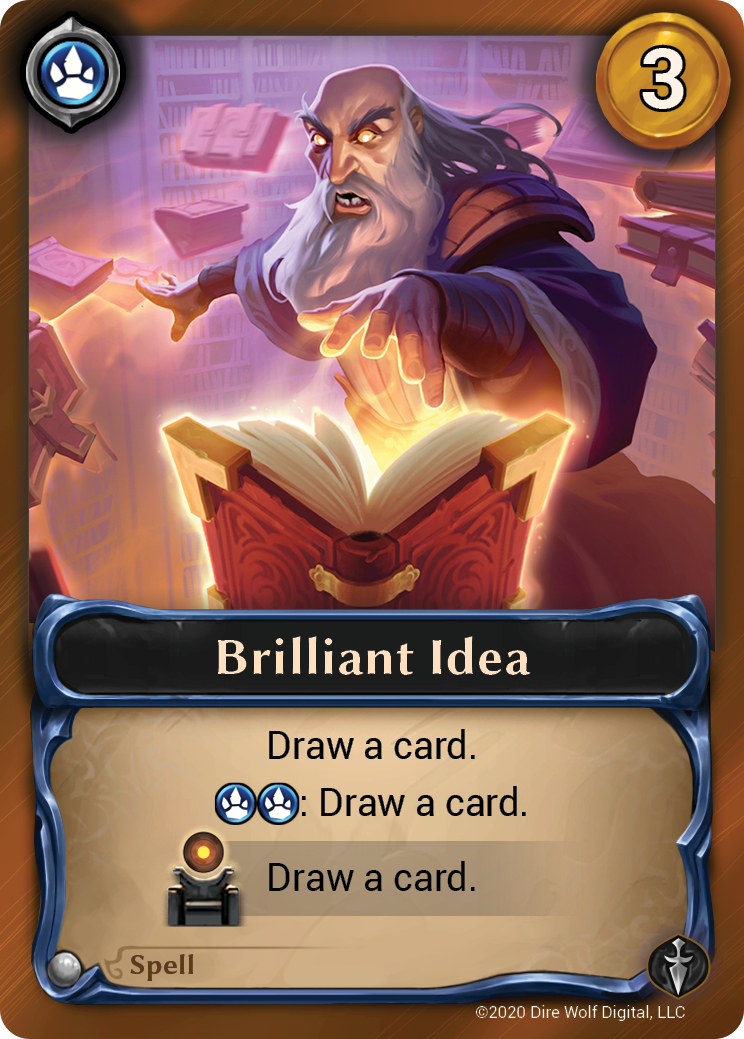 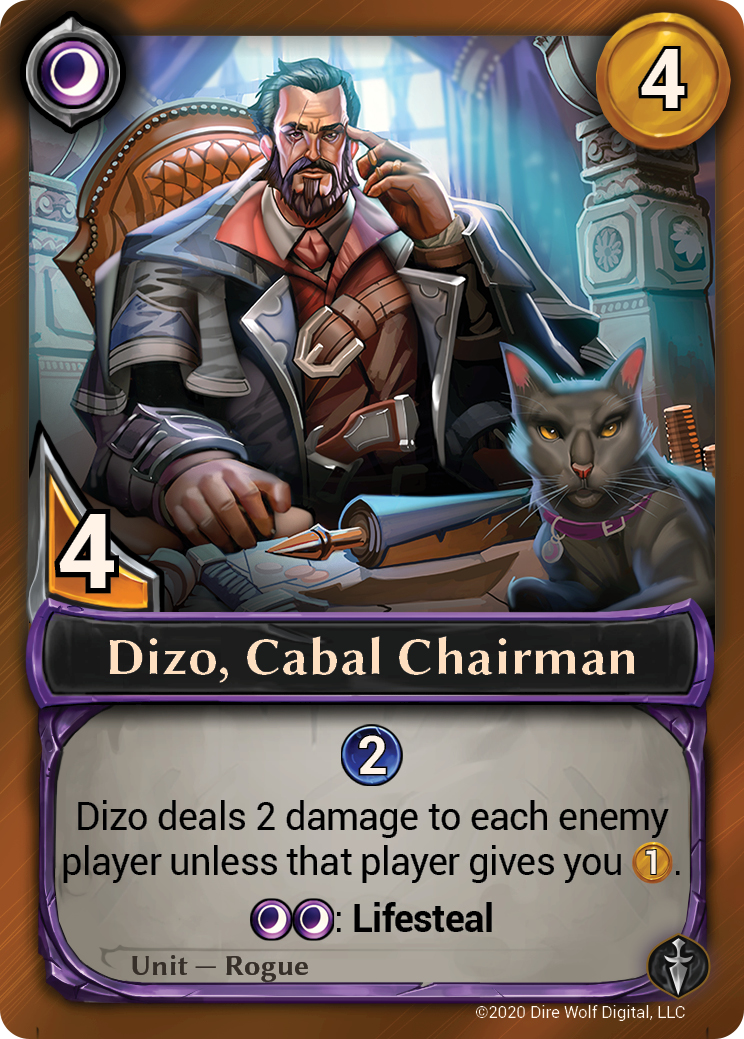 Before I sign off, I thought it might be fun to go through some cards from the expansion and mention some related design issues. 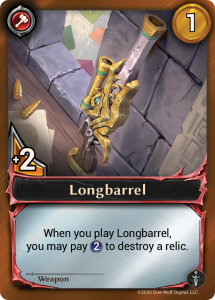 I like Longbarrel’s flexibility and how it appeals to different player types. You can draft it and simply “go aggro” with it, because it’s such an inexpensive weapon. Or, if you’re more control-oriented in your thinking, you can keep it in your back pocket to react to an opponent who buys a powerful relic. The design goal of secrecy really comes into play here, as you really have a different experience when you see relics flop and have this tucked into your Market. 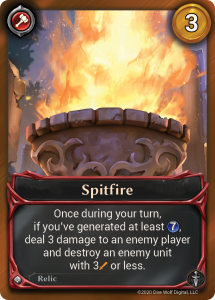 Spitfire was one of the last cards added to the set. I wanted a slot to support the “7 or more power” theme that had been established in the core box, and it took a while to find a card that I was happy with. For a long time, the set included a Flamestoker relic that created a 5-strength Infernus unit (with Can’t Block) when you reached 7 power, but it had two problems: (1) Making  5-strength token felt too similar to Pillar of Amar (previewed last time), and (2) decks that try to get good at making 7 power often fall behind on health totals, and making a big Can’t Block unit isn’t particularly good at helping you claw back into a game when you’re being beat down. 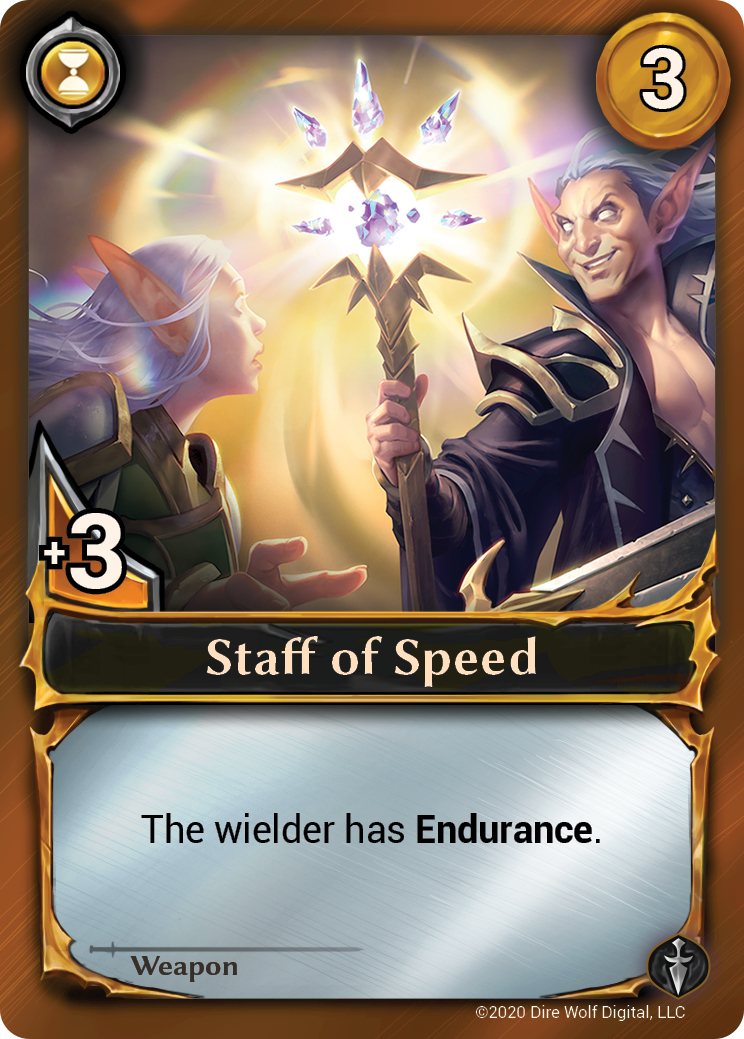 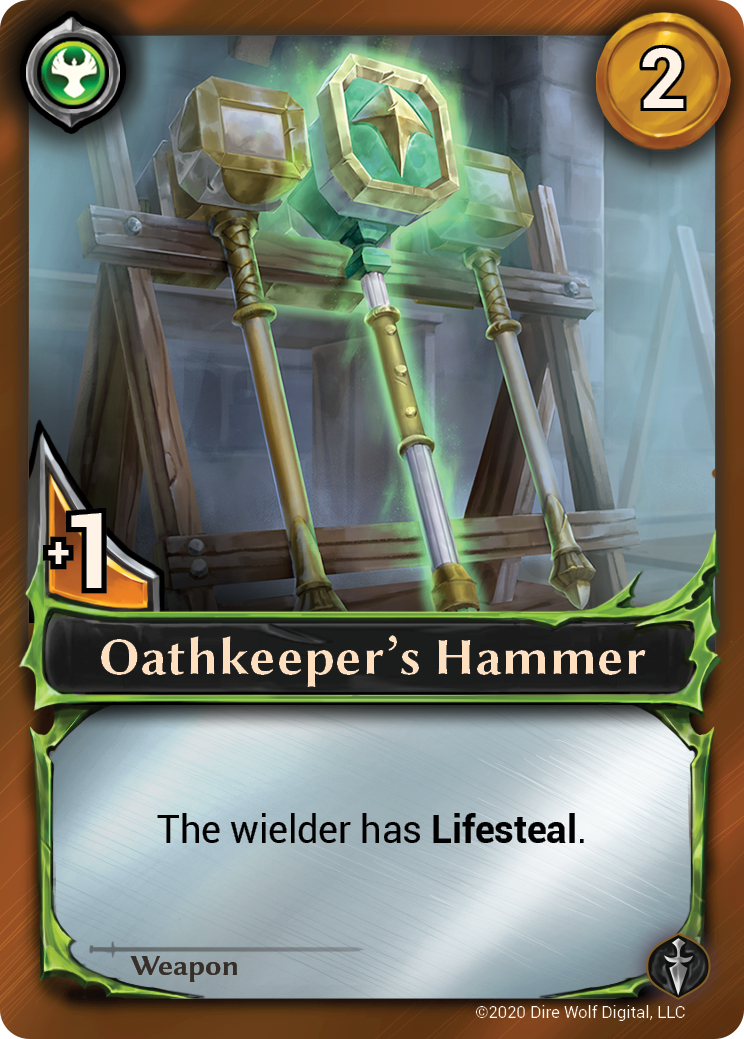 Staff of Speed and Oathkeeper’s Hammer were adjusted regularly during development. At one point, their stats were both +2. They ultimately landed here, partly because Lifesteal is “stronger than you might think” when you have the sort of control that the Market gives you. 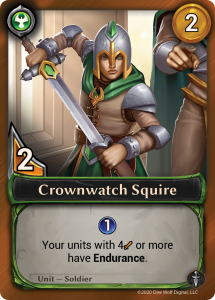 Weapons being in the game meant that continuing to support “I’ve got strong units” was a no-brainer, and Crownwatch Squire is a fun support tool in that player’s arsenal. 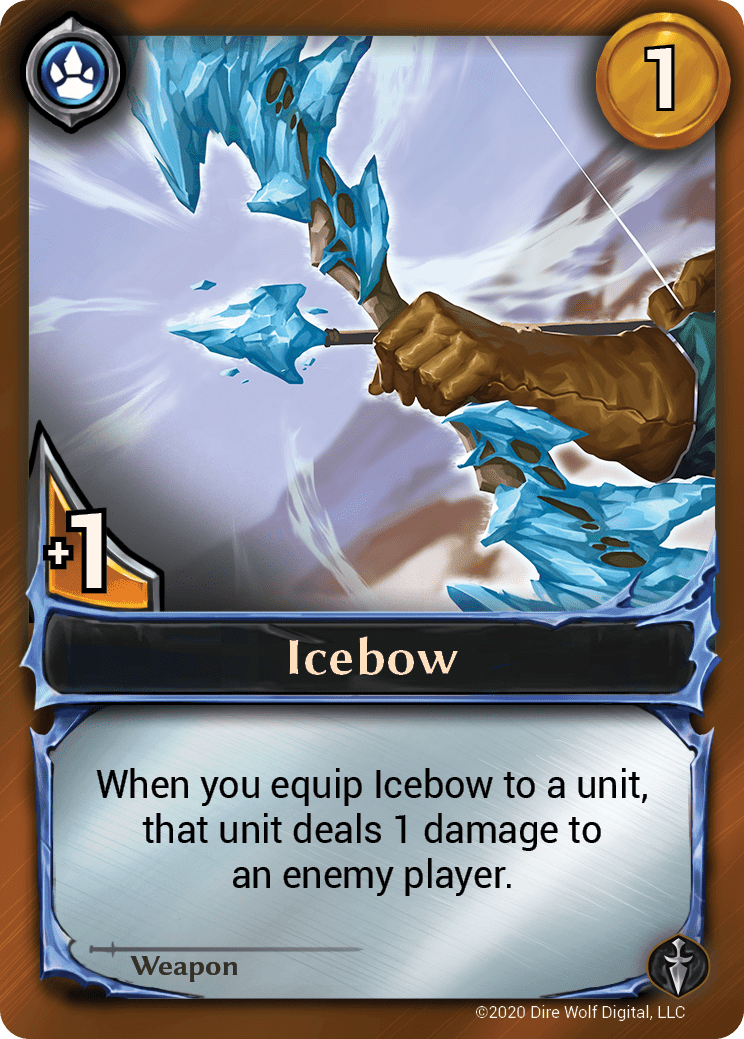 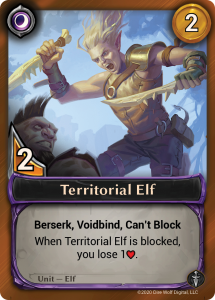 In set 1, the Voidbind mechanic was on cards that were oriented toward long-game control-oriented strategies. I specifically wanted this slot to bend the way players might think about Voidbind; namely, more aggressive strategies can benefit from Voidbind, too! 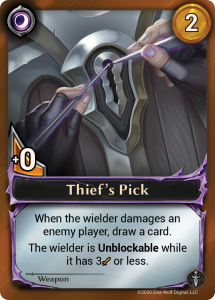 Thief’s Pick is one of my favorite cards from the set, both in terms of flavorful mechanic and making you think a little differently about some of the units you draft from the forge row. 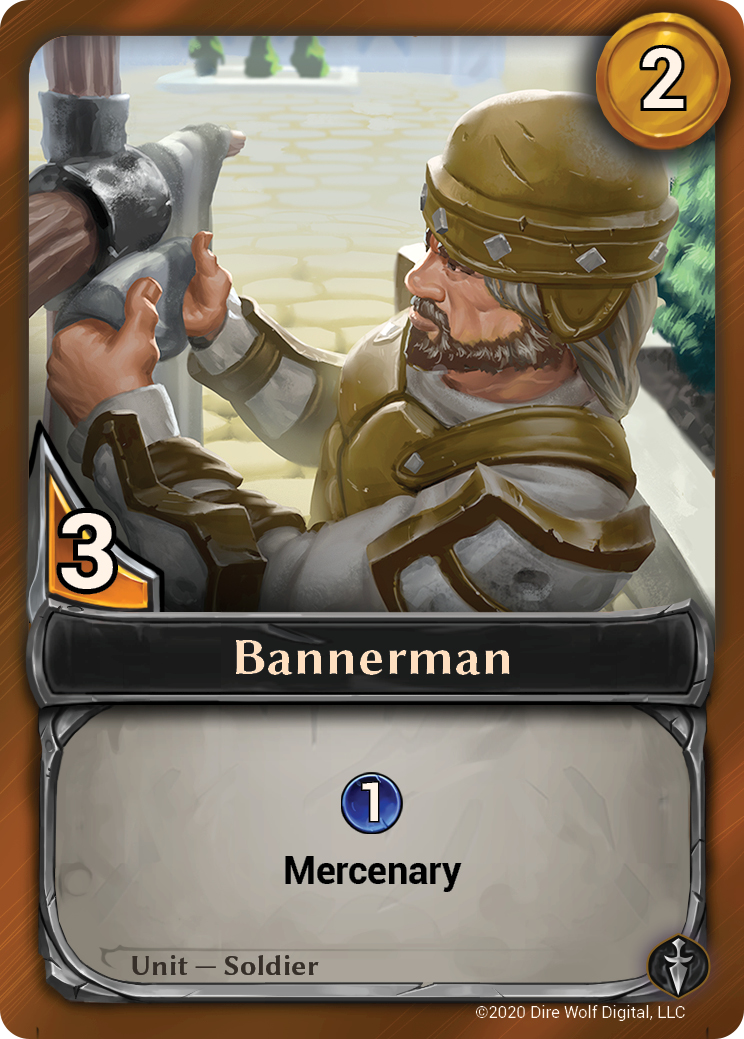 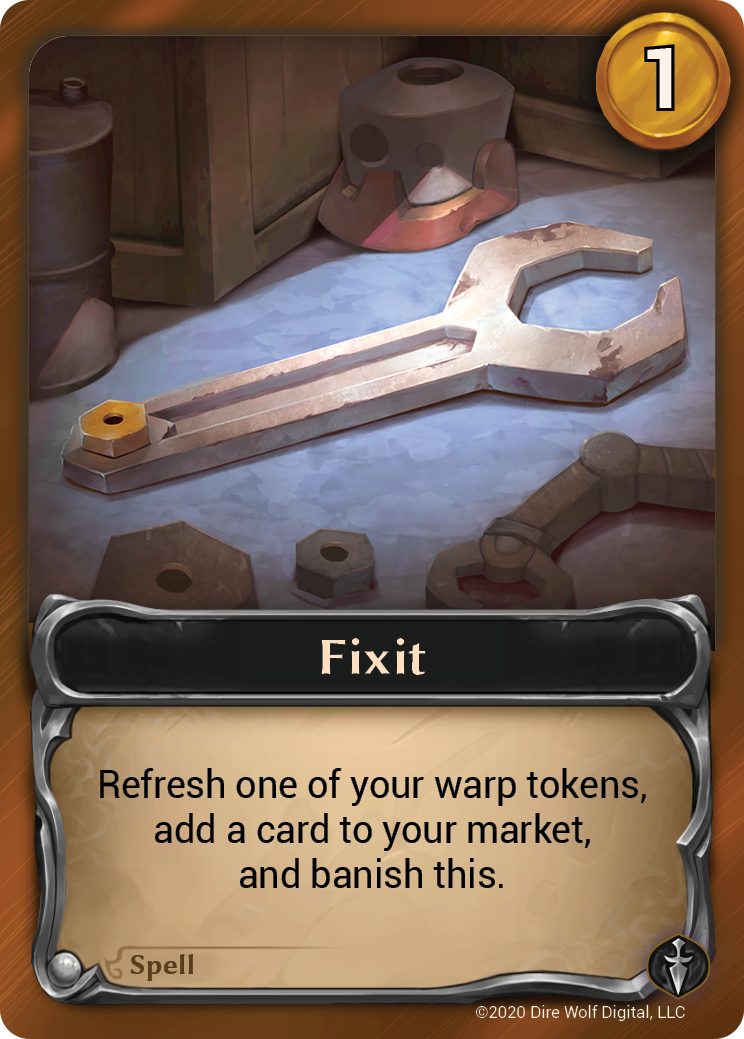 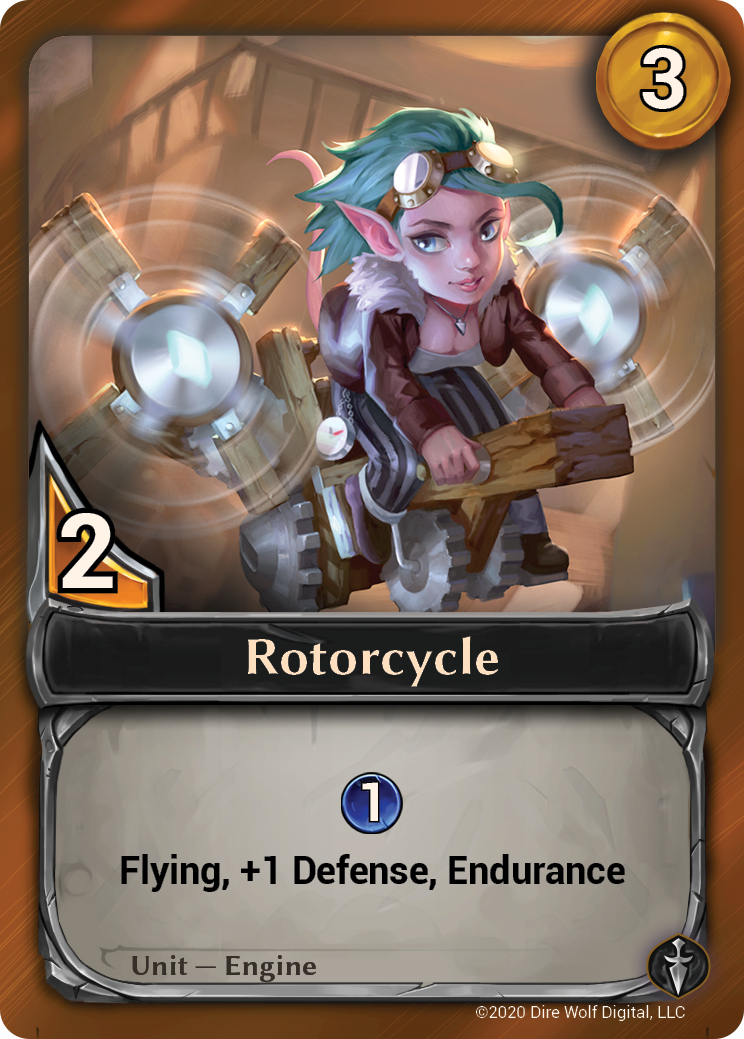 In contrast to cards that give you a specific pursuit, it’s also fun to sometimes have a flexible toolbox at your disposal, and all three of these neutral cards fall into the toolbox category. 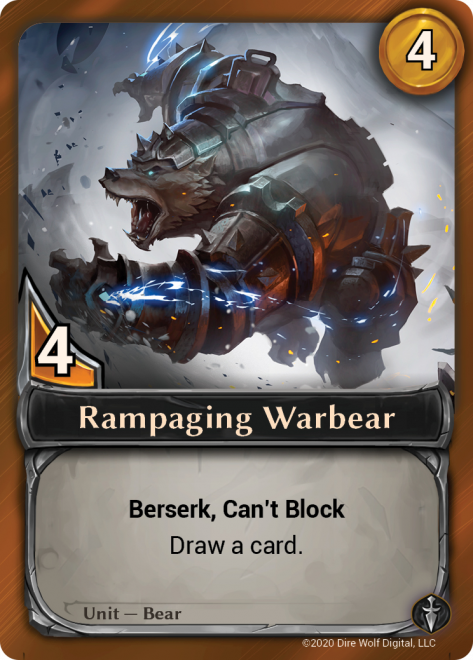 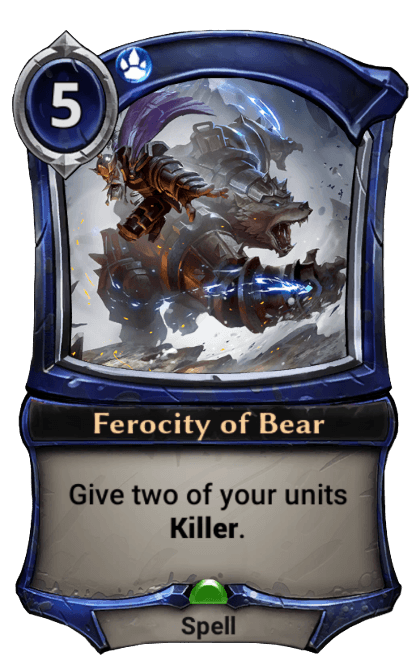 When we translate cards from Eternal to Chronicles, we try to keep the same name, card type, and faction, and as much as possible, give the card a design that evokes a similar feel as the original. In this card’s case, we not only changed the name of the card, but we also changed its card type, its faction and altered the image by using the image mirror and removing the leaping mage! This was all in service of filling in a design hole in the neutral Market cards; I specifically wanted this slot to be a high-cost, attack-oriented card. 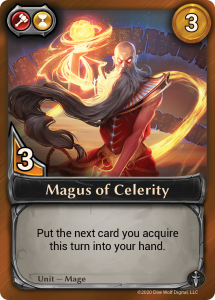 This card was a pretty big hit during development, as it allowed playtesters to pseudo-warp cards that don’t have a warp icon! The first version of this card also provided you with power to spend on buying a card, which made it too powerful to ship. The fact that you can add it to your turn with Gold already allows you to combine it with a high-power hand, which can be extremely powerful. 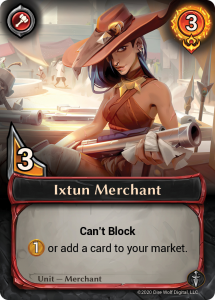 There was some debate among the development team about differentiating the merchants. While I wanted the merchants to be a cycle and share a common mechanic (make Gold or add to your Market), the Ixtun Merchant did receive Can’t Block during development. I think this served well at giving her a different texture than the other merchants. 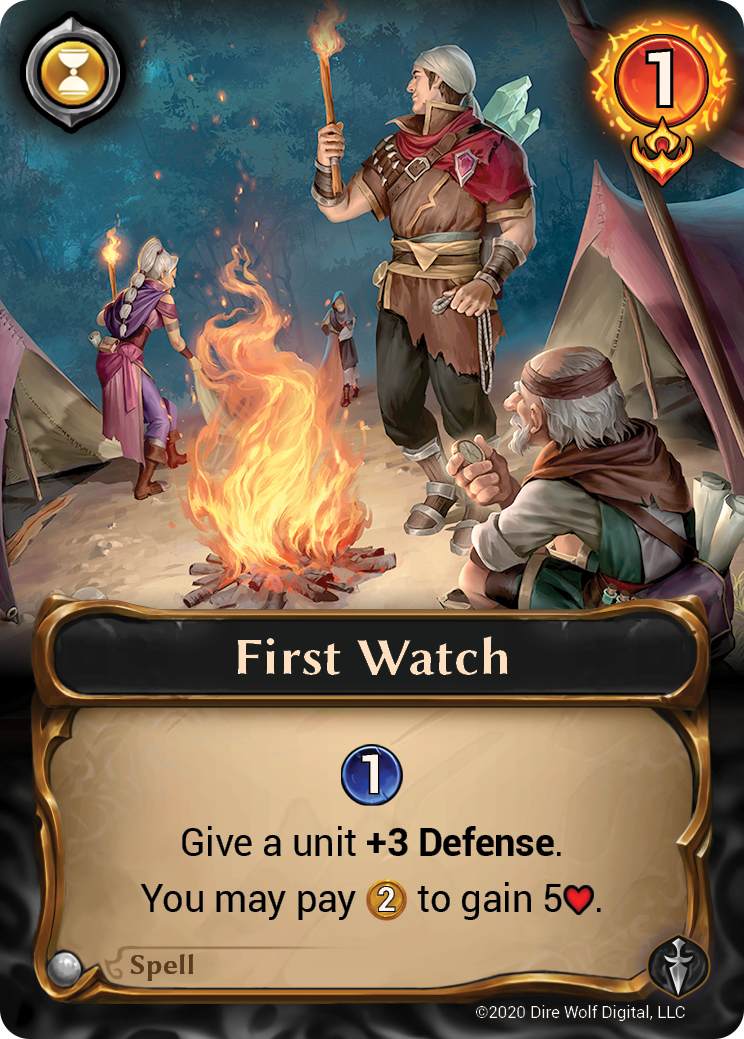 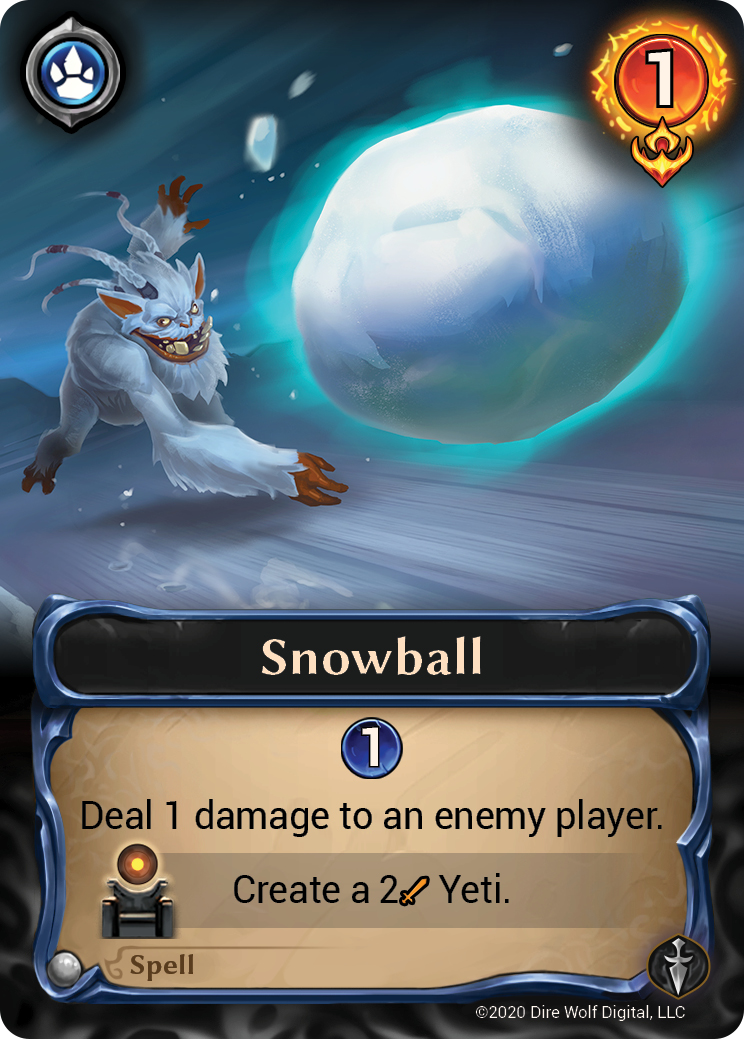 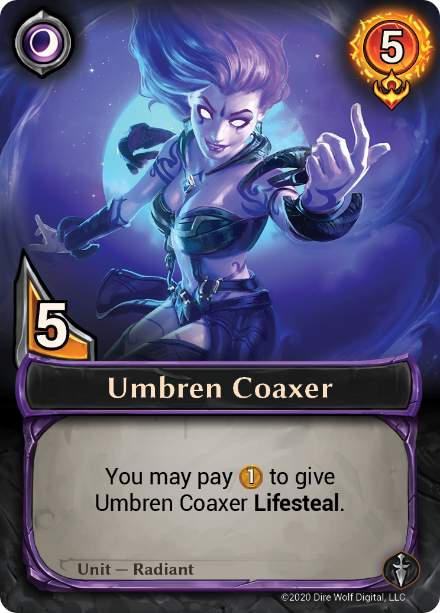 One of the design rules I established in the core set was that warp cards should not generate power or draw a card on their own. This was primarily to generate smooth gameplay and avoid mathy turns where you spend some amount of power for a card that then gives you more power so, wait, how much power do I have now?

With Gold and Steel, I allowed myself to break the rule (after all, rules are meant to be broken, right?) when the math is a little bit easier. For both First Watch and Snowball, the amount of power you have after you warp them into play is the same as you had before you warped them. First Watch and Umbren Coaxer are notable in that they provide Gold sink opportunities for players who find themselves with too much Gold. It’s a rare position to be in, but one that we wanted to address with several cards in the expansion.

Thanks for reading, I hope it was an enjoyable look behind the scenes. Gold and Steel is available for pre-order right now on the Dire Wolf website, and will be in Friendly Local Game Stores everywhere next month.