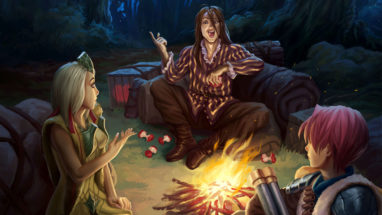 Hello Eternal fans, I’m Patrick Sullivan, one of the designers on Eternal. As a longtime player of a number of card games, I enjoy all manner of constructed formats, but often my favorite way to play is Draft or Sealed. For those of you not familiar with those game modes, it usually refers to playing without a preconstructed deck, and instead building out of a limited card pool, and then playing against players who have done the same. Whenever we release a new set for Eternal, we know that some players will be playing these formats for the first time, or perhaps have played something analogous but different from how these formats work in Eternal. With the release of Cold Hunt later today, November 11, and our updated draft rewards, we expect that more first-time drafters will be playing this set than any set in recent memory.

What follows is meant to be a FAQ of sorts for newer drafters, including an introduction into how drafting works and some basic strategy.

In Eternal, players construct decks by selecting cards from packs, the same packs you receive as rewards, or purchase in the store. The order of the packs updates, but as of this writing, the first pack you will open will be from Cold Hunt, and you select one card from that pack. After you’ve selected that card, you will receive a pack with one card missing, and then two, and so on, until you’ve drafted twelve cards. 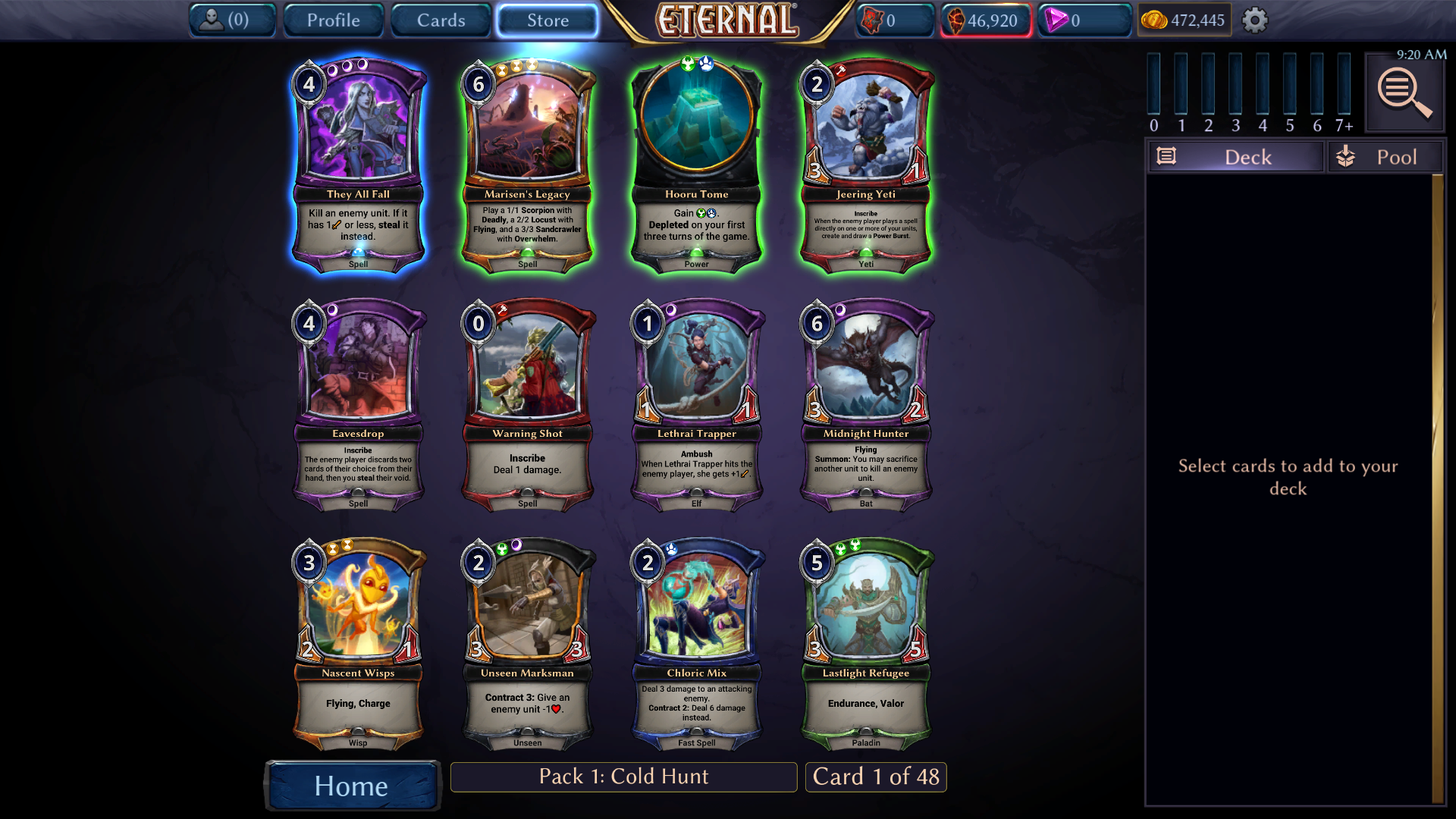 The next pack you receive is a pack of the Draft Pack. The Draft Pack is a specially curated list of cards from previous sets that are legal both in Draft and Expedition. Again, you will be presented with twelve cards with a rarity distribution identical to any regular pack. If you’re interested in the full contents of the Draft Pack, it is available here.

After selecting twelve cards from diminishing packs, you’ll draft another Draft Pack, and then finally another pack of Cold Hunt. After this, you’ll be sent to the deckbuilding screen, where you will build a 45 card deck out of the cards you’ve drafted, along with any number of sigils. As in constructed, at least 1/3rd of your deck has to be power cards. 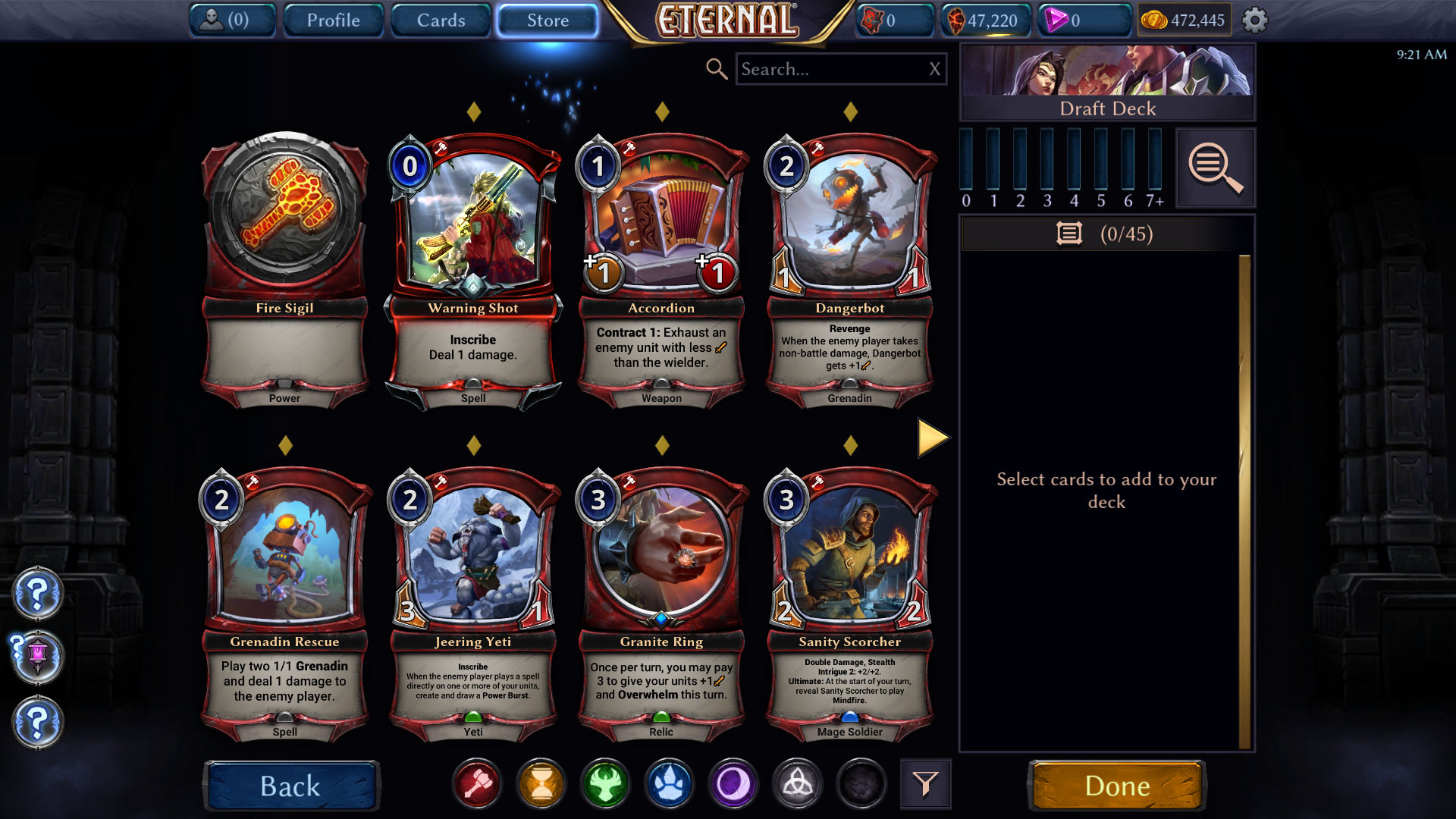 After you’ve built your deck, you can hop into the queue and play against an opponent. You can play with your deck until you’ve either won seven matches or lost three, with prizes given out based on how many wins you earned. 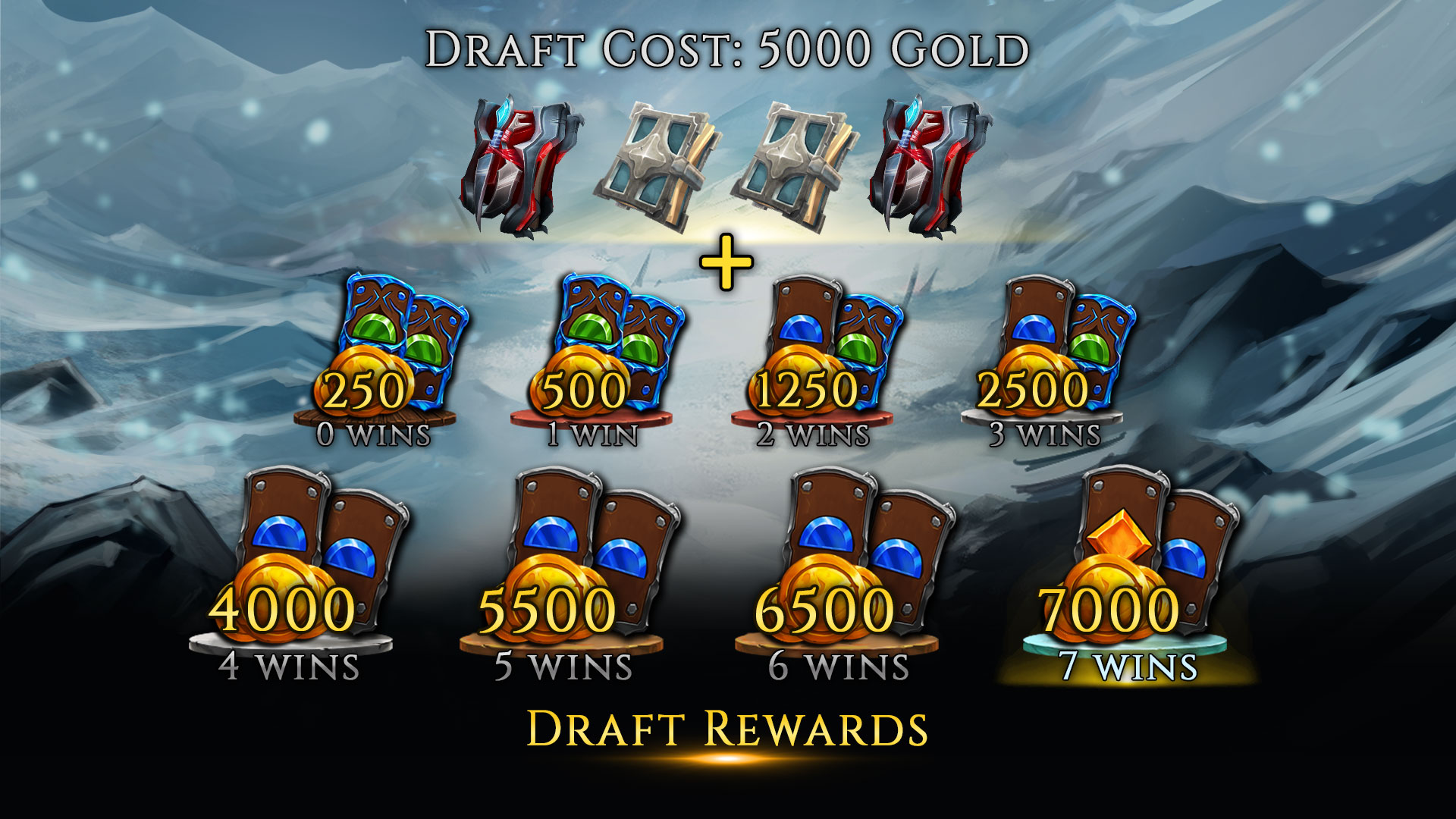 Along with these prizes, you also keep all the cards you drafted, and draft matches can count towards your completion of the appropriate quests.

What is some basic strategy for draft?

Much like building a constructed deck, consistency is a key part of drafting and building successful draft decks. It is most common to play two factions in Eternal–single-faction decks typically struggle with card quality, and three faction decks can have trouble finding their proper sigils in time. However, certain individual cards (like multi-faction power, or Seek Power) or mechanics (like Inscribe) can make finding three or more factions of power more reliable, or can mitigate the risk of drawing cards you can’t play. Also, sometimes three or more factions is just how a draft goes, or you pick up an extremely powerful card late in the draft from a faction you weren’t primarily drafting. No need to feel defeated if you find yourself in these circumstances.

Unlike many other digital card games, the packs you receive while drafting in Eternal are not randomly generated. Each pack you receive in Draft is a pack a previous user received and selected cards out of. What that means is that there’s the concept of “signals”–that seeing a strong Fire card relatively late can mean the person you’re receiving cards from is not drafting Fire, for example.

Now, sometimes you open a card so strong that you’re willing to commit to that faction in spite of being downstream from a drafter in the same faction, but ideally you’d like to avoid the factions that the person you’re receiving from is taking. This way, you can select stronger cards from the factions not being selected, rather than picking from their leftovers. Getting a sense of the strongest cards in each faction, especially at common and uncommon, and developing a sense of what it means for a faction to be “open” is a differentiating skill among the best drafters.

It is good to be mindful of your “curve”–a blend of cheap and expensive cards so as to try to optimize for plays at all stages of the game. If your deck is particularly aggressive, it is worth considering putting a premium on cheap cards that allow you to use power later (Ultimate and Contract are two examples.) If your deck is on the more powerful and expensive side, a cheap card with Inscribe, which can be either an early play or a power as needed, might be a more valuable pick for you than for other drafters.

I think the value of straight removal like Cut Ties can be a little overstated, but it is important to be able to interact with opposing cards. That can take a lot of forms–for aggressive decks, something like Finest Hour can qualify as a way to take out a big unit, and for controlling decks looking to buy time for their late game, stuns and silences can be useful. Straight, high-rate removal like Slay or Permafrost is often a top pick, but isn’t a prerequisite to have a competitive draft deck.

Most draft decks play 16-18 power. Decks with lots of cheap cards can err lower, decks with a lot of expensive cards or more arduous faction requirements trend higher. It is also a function of how many good cards you have–the difference between the 17th and 18th power can often come down to “how good is the card I’m cutting for the 18th power?” Cards like Amber Acolyte or with Inscribe can tilt you towards a lower count, as well.

Any tips for playing?

Once players reach the more competitive ranks of constructed, rarity isn’t typically a factor in how someone constructs a deck. In draft, people’s decks are disproportionately made up of commons and uncommons. So in constructed, “do I play around Harsh Rule here?” isn’t informed by the fact that Harsh Rule is a rare, but in draft that matters a ton in terms of the likelihood that your opponent has it in their deck in the first place. So, getting a sense of the important “tricks” (typically fast spells that impact combat or serve as removal), units with Stealth, and other potential surprises at lower rarities and orienting your play around maneuvering against those cards is a useful starting point. That isn’t to say to completely ignore rares and legendaries–if your opponent hasn’t played a unit for the first four turns, don’t be surprised if some rare sweeper shows up to ruin your day on the fifth turn.

Just like constructed, it is good to know what cards in your deck can get you out of losing spots. If you are falling behind in a game but your deck contains a Lava Burst, making an ostensibly “bad” attack that gets your opponent to 6 health might let you steal a win if you draw Lava Burst the following turn. Similarly, if you can only win if you draw your Harsh Rule the next turn, it might be better to not play a unit that could be useful after you play Harsh Rule, rather than playing it. Context matters, but when things are looking bleak try to remember the cards that can get you out of a jam and play towards them, even if they aren’t in your hand at the time.

What do I do from here?

Start drafting! Get some practice in, of course! Additionally, we also have some special draft content coming up you may want to check out if you’re looking to improve your game, or just become more familiar with this format!

Tomorrow, November 12th, at 12:00pm MST (19:00 UTC) Eternal Designer Patrick Sullivan will be streaming some Draft play and sharing tips for the updated format! Join us on the Dire Wolf Twitch page for this special stream!

Starting on Friday, November 19th, you can enter the Cold Hunt $5K Draft Open for a chance to win a seat at the World Championship! And if you don’t make the top 64, you can watch all the action of the finals on the Dire Wolf Twitch page on Sunday, November 21st with commentary from Eternal Designers Andrew Baeckstrom and Patrick Sullivan. The Stream starts at 11:00 AM MST (18:00 UTC), we’ll see you there!