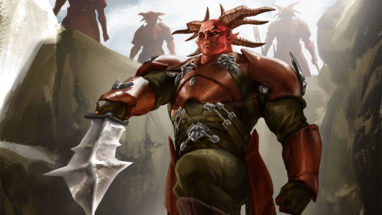 Hello, I’m Patrick Sullivan, one of the designers on Eternal, and what follows is a set of live balance changes, which will take effect on Wednesday, May 4th. These changes strive to do two separate things: reduce some of the power level of Rakano, specifically in Expedition, and to preemptively address combos that would have emerged with the introduction of Unleashed.

Since each card listed below is receiving a reduction in power level, either through the card itself or as an externality to the Destiny rules change, each crafted copy will be eligible for its full sellback in Shiftstone, or in Gold in the case of Scalesworn Patrol. 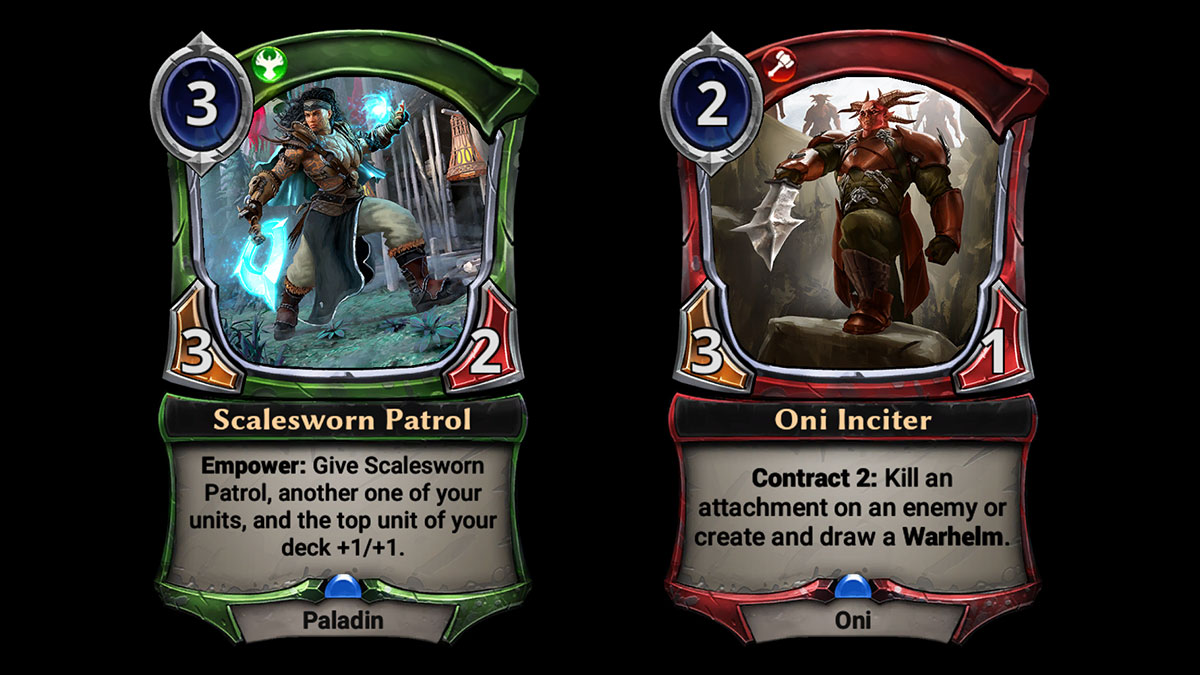 Scalesworn Patrol – No longer has Inscribe

Rakano is currently the most played and most winning strategy in Expedition, so much so that each individual card that frequently shows up in the deck wins has a higher rate than any card that does not. Part of this is the depth of the card pool. As numerous recent events have shown, there are a number of ways to build Rakano, each with different strengths and weaknesses but all of which are legitimate competitive options. Under these circumstances, pulling back on certain cards comes with the risk of not being sufficiently disruptive. Since the deck plays reasonably well (setting aside its win rate), we also aren’t particularly interested in nerfing the core experience of the deck, whatever measures would be necessary to accomplish that.

We are close to releasing our latest expansion, Unleashed, which will both add and subtract a lot of cards to the Expedition format by virtue of rotation. With that in mind, the Rakano cards we wanted to target had a mixture of the following characteristics:

1) Ubiquitous in all current builds of Rakano, rather than something that appears only some of the time.

2) Likely to be problematic on power level post-rotation

3) Hard for us to make cards that line up in a satisfying way against it, because their power is largely nested in a Summon effect or is otherwise very frontloaded.

Oni Inciter easily checks all three boxes. It is a staple of all versions of Rakano. It is easily “best-in-slot” for Relic interaction, both because of its power level against people with attachments and also against people without. And a card this cheap and with this much immediacy (either blowing up an attachment or drawing a unit weapon that grants Strength, Charge, and Warcry) isn’t going to be pushed out of the metagame no matter how many Saloon Massacres or Obstructive Flickers we make. Oni Inciter also represents some downside risk more broadly, as it being a widely played card (in Rakano or otherwise) could produce a chilling effect on people playing with all manner of attachments.

Scalesworn Patrol is another example of “high floor, high ceiling” that could stand to lose a little bit. At its best, it either runs away with the game or generates a lot of value while demanding an immediate answer, and at its worst it’s a depleted Sigil. The Inscribe is not essential to the card’s play pattern or experience, while significantly adding to how frustrating it is to play against–you disproportionately encounter the card in spots where it is strong, since it gets Inscribed much of the time when it isn’t.

In both instances, we believe these cards will still be competitive options, but will be slightly less ubiquitous. With their increased opportunity cost, we hope that sometimes playing with fewer than four copies will be appropriate, and that it opens up more space for cards of similar functionality and/or power level to appear more often in competitive decks. 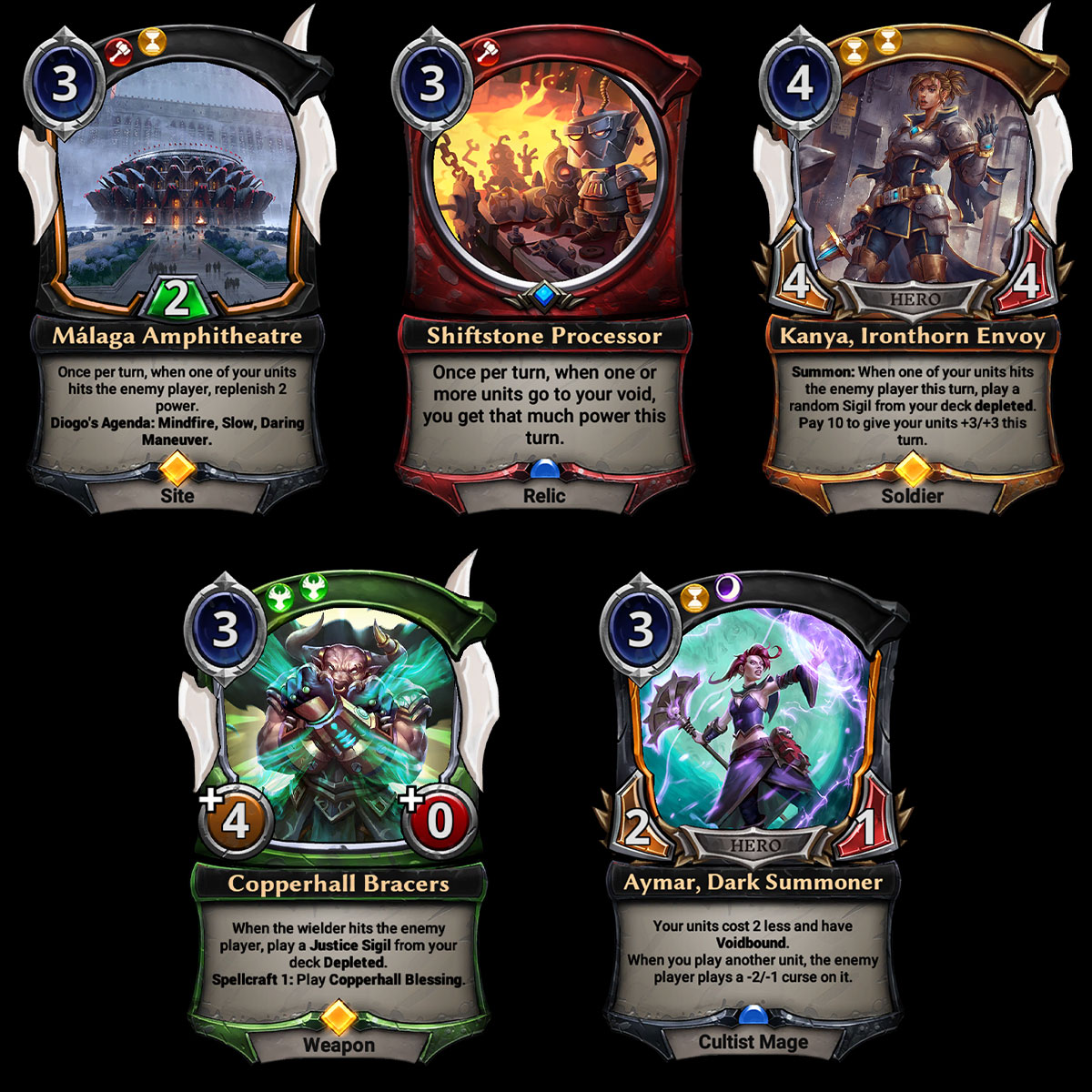 Each of these cards were potential infinite engines alongside Autotread and a few new cards coming out in Unleashed. In each case, they are maintaining much of their rate in the “normal” case, while cutting off the ability to “go infinite” alongside cards that capitalize on the previous Power rebates, unbounded triggers, or other open-ended loops. As a quality of life change, we are also changing Malaga Amphitheater to rebate a flat 2 power, rather than the more laborious “remaining durability” callout, as it was so close to 2 anyway that there was little value in maintaining the text box once we decided to change the card in another way. 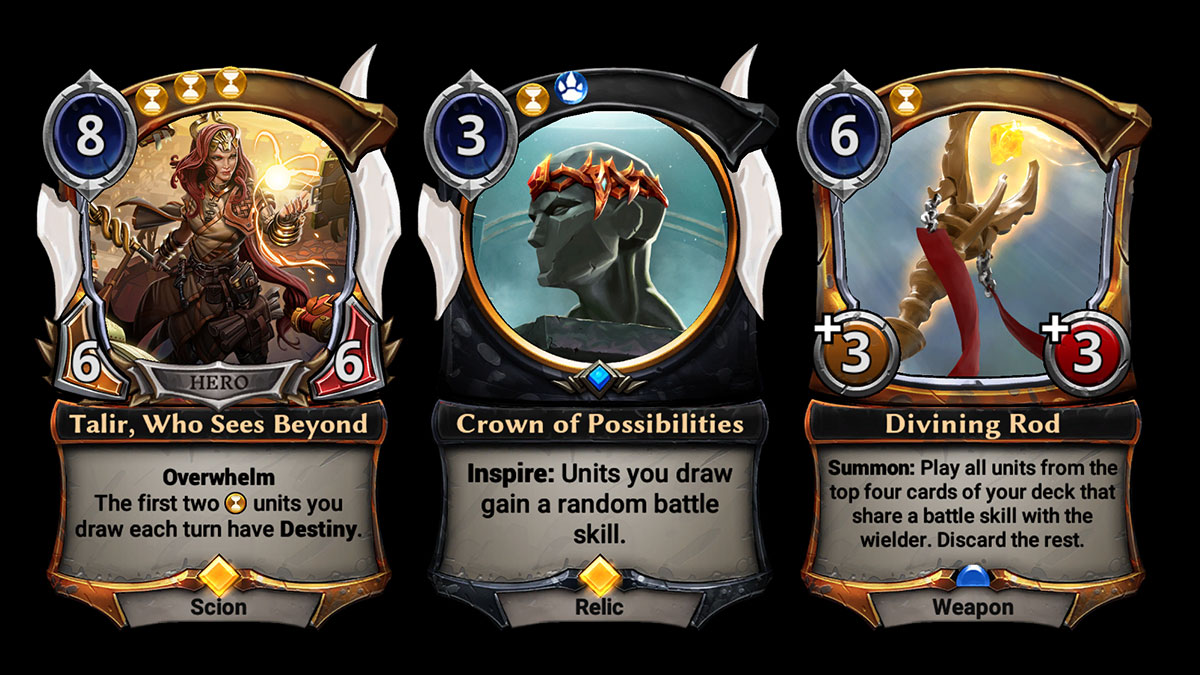 Divining Rod and Crown of Possibilities were already mentioned in the Destiny rules update, but are being mentioned here as well as they are functional power downgrades to the cards. Talir is receiving a text box change to adhere to our new philosophy around open-ended Destiny triggers, as well as addressing edge cases with certain Unleash cards.

As always, thank you for your continued support of Eternal, and make sure to stay tuned as we continue to roll out more Unleashed previews in the coming days.

The best way to keep up to date on everything coming to Eternal is by signing up for the Dire Wolf newsletter. You’ll also get a code for a free pack with every email!