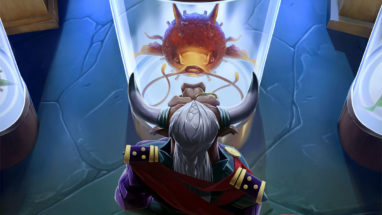 As Eternal prepares to head back to school next week with the release of Enter the Arcanum, we have a new patch bringing some balance changes and a few redesigns to help improve game performance. These changes will be going into effect later today, August 10th, 2022.

The Xenan reanimator deck in Throne has been a dominant force in the recent metagame with the ability to compete on the board early and combo off for a fast win. By bringing a Vara back from the void to effectively win on the spot by chaining together units that themselves play a shadow unit (like The Rat King or Karvet, Solar Dragon), proc’ing Vara again. Frequently, any deck that isn’t very aggressive has little hope of competing with this gameplan as most forms of interaction are just not enough with how much chaining Vara is capable of. While we looked at changes to some of the other pieces that can combo with Vara, this is not the first time Vara’s ability to chain off tokens has produced balance issues. She’ll still be able to bring back a unit if she herself is played or reanimated, but players will need to wait for another turn to do more than that.

To further the interest of making it more possible for players to come back versus the Xenan deck, we’re taking a point of stats off Katra. She’ll still be able to grow and play power from the void, but will be starting from a smaller base.

A fixture of Combrei Relic control decks, we’re reworking this card’s numbers to ease up on the armor that was a huge burden on attacking players to work through. Now a 3/5 for 5, it still can be played for its spellcraft ability when you have 9 total power, like before, but with less armor in both cases, we’re hoping this will lead to more games with exciting moments in the turns after.

The Masterwork really helps Yeti decks snowball games, simultaneously pumping up the whole squad and making playing units to block often ineffective through its Agenda of spells. By pulling back on how cheap and early this site comes down, we’re aiming to open up more space for opposing units to get in the way.

The change to the entomb ability here will make all the Menagerie and all their units go away if one gets blown up. In addition to pulling back a little on the card’s power level with how risky running multiple is, this should also be a quality of life improvement as there will be less need to investigate which unit is connected to which Menagerie.

The influence change makes this still-powerful relic a bit more to work for in both constructed and in draft. Particularly in draft, we’ve heard feedback from players concerned by how warping a powerful splashable relic at rare can be on the format and its games. It’s important there are great cards that all players including novice players can succeed with, but we need to remain vigilant about how often they show up, how easily they can be splashed into other factions, and how much good interaction there is with them at lower rarities.

The Rat King is a tough card to face, particularly in Expedition if you are running smaller 1 health units. It’s great to have checks against players rushing the field with lots of fragile units, but The Rat King does so at a rate stronger than is ideal. By pulling back on how cheap his sacrifice ability is, we’re also reducing how quickly in games he can be combined with Huntmaster Vikrum.

The Guerillas are losing a point of health, making them easier to deal with, particularly when unleashed multiple times.

The Endurance here was doing more to lock out players than anything else. The Warcry 2 is a source of strong inevitability, an important characteristic for a game-changing card with only 1 attack. By taking off Endurance, we’re looking to promote some shields-down moments where there’s a little more risk associated with it.

This change is to address a confusing (and undesirably powerful) interaction with passive Strength buffs (like Xenan Obelisk), which allowed units to benefit from Unleash without being affected by the 1-cost minimum.

We have some buffs to announce as well. These are largely targeted at bringing up some newer cards and giving them some extra juice to give them a new shot.

We’re announcing new designs today for a few cards each of which have proven problematic and unreliable. Rather than leave these cards in an unstable state where they could introduce lots more bugs with each new release, we’re changing them. Our preference is always to identify the underlying issues and fix things that way, but that occasionally comes into conflict with our first priority of delivering a great game experience.

Mimicry Vine – now “Ultimate: Pay 4 to transform Mimicry Vine into a copy of a unit in the enemy void.” (was “Ultimate: When one or more of your other units use Ultimate or Summon abilities, reveal Mimicry Vine to have them get those effects again.”)

Each of the above redesigned cards will be available for sellback.

Note: As Mimicry Vine is only available through the Hour of Glass campaign, falling outside of our normal system for refunding crafted cards, we are giving a one-time grant of a 1,250 gold to users who purchased the campaign (similar to previous campaign changes). Users who upgraded the card will receive an additional 1,250 gold. Players will of course keep all their copies of Mimicry Vine.

One card that is not changing is Grand Suppressor. This card has similarly had a number of bug issues, but a lot of work went into rebuilding parts of our code to get it and the summon abilities in the game into a more reliable place. We know from feedback, the ability to interact with Summons is something players are looking for, and Enter the Arcanum may just have something in that vein…

As a reminder, we have a Throne Open this month August 26th-28th, we hope you will all join us for this event where Enter the Arcanum cards will be legal as they release August 17th! Purchase today, and we’ll see you there.