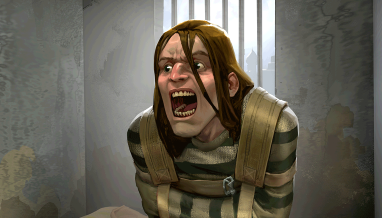 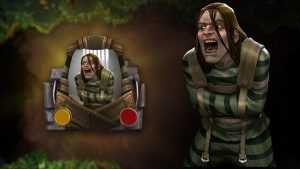 At the end of a long, grey wharf in Kerendon sits a tall and twisted building. The shingles that coat its walls are warped, worn by sea spray and unending wind. As the waves crash against the pilings sunk into dark rock far, far below, the sanitarium creaks and shudders—a groaning sound that echoes through its halls.

A lone figure stepped from the coach at the end of the wharf. Gems gleamed on his long fingers, and his robes swirled about him, cutting through the mist. He smiled a tight, satisfied smile as his driver and footman began to wrestle a heavy trunk from the back of the coach. Without waiting, he approached the iron-studded doors of the old hospital.

“Welcome back, sir,” the orderly at the desk said, greeting the man and taking his damp overcoat.

“And how is our patient doing today?” The man asked, glancing up at the water-stained ceiling. Some of these simpletons believed him to be merely a doctor, come to help treat the afflicted. A convenient assumption, if very, very wrong.

“Not well,” the orderly replied with a shrug, pulling a jangling keyring from the drawer. “He’s been worse since your last visit. Phobias, night terrors, delusions of prophecy, the usual.”

There were many cells. 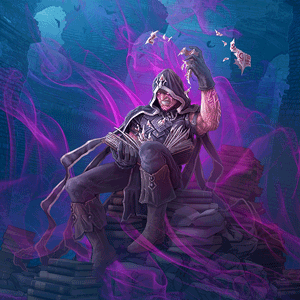 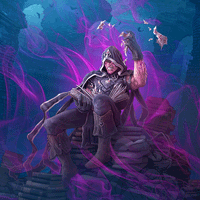 “Tsk tsk,” the man frowned. “Then it seems I have returned just in time. Shall we?”

“Of course.” The orderly nodded, and lead the doctor to a wide staircase, each step creaking beneath their feet as they climbed. On the second floor, candles coated the walls, glowing with soft light. On the next floor, the heavy metal doors to the rooms shook and rattled in their frames. Above that, the floor was deadly quiet, but for the sound of nails raking against the cold stone walls. The two continued their ascent, heading for the cell at the very top of the sanitarium. The cell of Deleph the Cursed.

The first time he had seen Deleph, the inmate had been sitting on his thin bed, looking through the rusted bars of the window. Deleph was gaunt, and his hair hung to his shoulders, greasy and unkempt. As the door had closed behind the departing warden, the visitor had asked,

“Why do they keep your arms bound?” 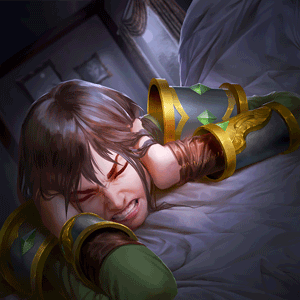 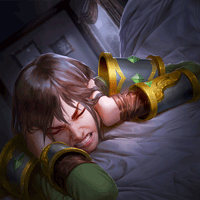 Deleph had licked his lips. “Sometimes I try to claw my eyes out.” His voice was rough, unused to conversation.

“So they tell me,” the doctor said. There was a rustling sound as he withdrew a scroll from his robes. “They also tell me that you claim to see the future, is that correct?”

Deleph turned away, his eyes narrowing. “I don’t claim. I just do. It comes for me, in images and whispers. Whether I want it to or not. I barely sleep. But they don’t listen.” He grimaced, “No one ever listens.”

“That’s why I’m here,” the doctor said, pulling a quill from his sleeve, “to listen. Tell me what you see.”

“The others all said things like that, too,” Deleph spat.

“My dear Deleph,” Severin said with a pointed smile. “I think you’ll find that I’m quite unlike the others you’ve known.” He pressed the barbed tip of his quill into his scarred palm, drawing forth a thick bead of dark blood. Severin smoothed open the scroll. “Now. We shall begin.”

“I don’t know how you do it, doc,” the orderly said as the reached the top floor. Overhead, the rafters sagged with dust and cobwebs. “But you always seem to calm him down.” They drew up in front of a heavy oak door, and the orderly began sorting through his ring of keys. “Lately he’s been screaming bloody hell and biting at anybody who tries to dose him. Says you’re the only one who can help him.” The orderly raised an eyebrow. “So, what’s your secret? Medicine? Magic? Holy words?”

The orderly snorted. The “doctor” fixed him with a cold stare until the color drained from the man’s face.

The orderly cleared his throat awkwardly, turning to insert an ornate key into the first of the door’s many locks.

“My men are downstairs with an item I’ve requested. Help them up here.”

The orderly shifted uncertainly as Severin turned to the open door. “You may go.” 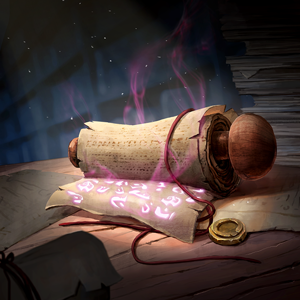 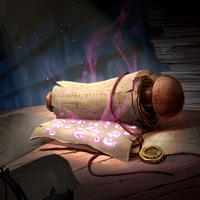 They spoke irregularly, but often. Whenever Severin arrived, Deleph would recount scraps of vision and whispered prophecy, and the mage would take notes on rolls of thin parchment.

“Snakes?” Severin asked, not looking up from his notes.

“N-no,” Deleph shook his head. “Larger than that. Much larger. And at night,” he clenched and unclenched his hands, “I am flying—or falling—through the sounds of war and slaughter. I wake as I hit the ground.” Deleph flinched, and looked up at his companion. “What does it mean?”

“The Clans and their scaly pets, no doubt,” Severin muttered, scribbling. “Intriguing, but of little use to me.”

“Last… time you were here,” Deleph began, hesitant. “You promised to speak with the other doctors on my behalf. Have you had the chance?”

“I’m afraid not,” Severin replied brusquely, standing and knocking at the door for the orderly. “At the moment, this may be the safest place for you. There are many out there who would exploit your gifts, Deleph.”

“Worry not,” Severin smiled, slipping the scrolls of prophecy into a pocket. “While you’re under my care, nothing will happen to you.”

“What do you have for me this week?” Severin asked, sitting down as the door thudded shut behind him. Outside, the wind howled and threw itself at the sanitarium’s walls.

“Little,” Deleph said, looking away from the window. His voice was hoarse, barely above a whisper, and there were dark circles beneath his eyes.

“Do not trifle with me.” Severin said, frowning. “Remember who it is that provides for your… care.”

'Do not trifle with me.' 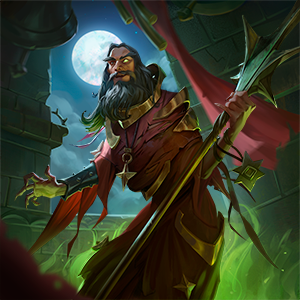 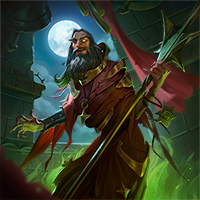 Deleph considered him. In the young man’s rare moments of lucidity, there was a hardness to him that both fascinated and frightened Severin. It passed, and he turned back to the window. “I dreamed…” Deleph trailed off.

Deleph started, blinked, and ran a shaking hand across his brow. “I dreamed of you,” he breathed.

“Did you now?” Severin’s face was an unreadable mask, but hunger lit up his eyes. “What did you see? What did you hear?”

When Deleph did not respond, Severin said, “I spoke with the Head Warden, you know. I thought we were making progress…” He sighed, “But if you’re holding back now, I doubt they would be willing to release you.”

“No!” Deleph shouted, leaping to his feet. “I’ll tell you! Please.”

Smiling, Severin gestured for him to continue.

“I dreamt…” Deleph began, sitting on the edge of his bed, “of snow. Dirty and streaked with blood. A carriage burned. Bodies were laid out in the snow beside it. You counted them by the light of the flames.” Deleph was shivering now, his eyes wide. “But there were not enough. One was missing.” He looked up at Severin, who stared back at him unblinking. “A girl had fled… another was dying. You watched her crawl away, through the mud and the ice. Her track was easy to follow. A man in armor drew a knife and moved to finish her, but you stopped him. You—”

Shaking, Deleph’s voice broke as he asked: “Who are you?”

There was a knock at the door, and a gruff voice said, “Sir, the package.”

“Ah,” Severin grinned, and turned his gaze back to his patient, his prisoner. His private oracle. “Thank you for your honesty, Deleph. You’ve been so helpful that I thought I’d take you away from here. Perhaps a little holiday?”

“Yes!” Deleph jumped, a flicker of hope cutting through the exhaustion and terror. “I-I’ve wanted to. Yes.” 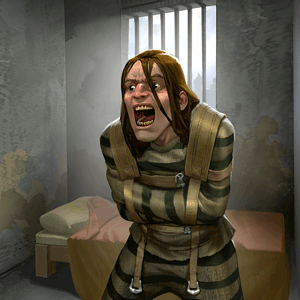 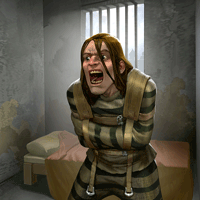 “I thought you might,” Severin purred, and opened the door. “And I always keep my promises.”

Without turning to his men, he said, “Bring the chains.”

Deleph saw a heavy iron box, smaller than he was, sitting outside his cell.

As two men stepped into the room, he began to scream.

He did not stop when the lid to the iron box was shut and he was left in darkness.

He did not stop as they carried the box down the many flights of stairs, out of the hospital. But the coffin was thick and well made, and the only sound that could be heard was a faint, dry whisper. 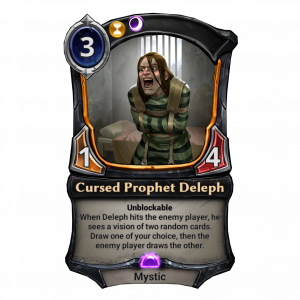 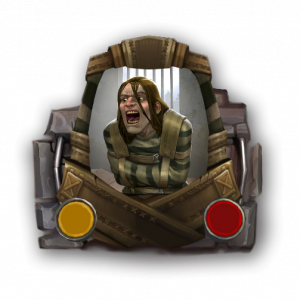