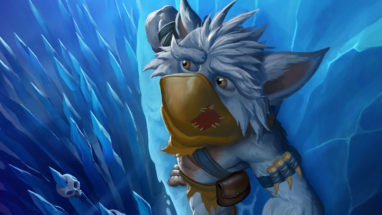 .Chirganth opened a massive shimmering blue eye and bared her teeth. The touch of a wild, unwarranted scent hit her nose. From the glimmer of magic stones wedged into the walls of her cave she saw the outline of a small, white, fuzzy creature.

She flicked her other eye open and listened to the miniscule thing grumble and grunt as it continued to paw at a vast mountain of gold coins, artifacts, and weapons. A hefty longsword  that glowed a soft gold skittered over the stone floor as the creature tossed it. Coins scattered as the thing seemed to dig deeper into a hole in Chirganth’s belongings.

She eyed the glowing sword that had once killed a giant and then had killed its wielder when they had sought to destroy her many moons ago. She watched as the little creature dug and threw away halberds, shields, coins, even glinting rubies and emeralds of varying sizes.

The dragoness shifted her immense form. Her tail swished behind her in a predatory manner as she let loose a single, deep, angry growl. She moved a few paces from her resting spot with coins and gems shoved aside when her claws trudged through them. In the dim lighting of her lair she focused on the would-be thief’s form.

It was a yeti with bushy fur, deep blue eyes, and handfuls of her valuables. The determined creature tossed the items with utter disdain.

“You there, small one,” she hissed with another dark, bestial growl.

“You dare trespass into the lair of Chirganth the Ice Queen? State your business. Or else,” she said and looked at the yeti. It waved a paw with indifference at her request.

The dragon roared, the cave walls shook from her fury as she opened her maw and a blast of frigid, devastating ice breath slammed into the pile of coins.

It landed just to the side of the yeti.

The yeti continued to dig unabated. The dragoness scowled as she towered over the small creature.

She angled her head down to get a better look at the bundle of fluff. She smirked. The yeti’s fur did look cute in its own way.

“I see,” Chirganth said with narrowed eyes. “You seem to have been at this search for… some time.”

She looked over heaps of treasure spread out in pockets around her lair. Myriad holes dotted the golden sea of coins as the yeti had clearly been busy.

“Plunk wanna beeg shinee for clan proof! Plunk Wumpkin prove Plunk is serious yeti! Not silly like Wump! Strong and serious yeti is guud!” Plunk gave a firm nod then continued,”Dergie have’a shinees but issa wrong shinees. Dergie have’a bad tastee in shinees. Not guud,” the yeti replied and continued to dig and push the dragoness’ treasures about. Another harsh clang on the stone floor sounded as a hammer that glowed red hot with fire magic landed behind the dragon.

Chirganth snorted then growled low. Her tail picked up speed and moved with an ominous swoosh. She felt the chill of her ice breath ready in her belly.

“I could very well freeze you where you stand, destroy you without a worry, you haven’t even a search party for this rite of passage,” she growled and moved her head down a bit more to stare into the yeti’s eyes. She got nothing but a shrug in return.

“Dergie still have’a bad tastee. Plunk return with no guud shinees, Dergie get better shinees,” the yeti replied and motioned toward the hills and valleys of treasure.

That ridiculous language. The dragoness grinned slightly but forced her features back into a glare. Delightfully cute and endearing way with words or not, this was still a thief.

“And just what…” Chirganth began, “does Plunk, kin of Wump, seek from…” She paused and smirked despite herself. Such a silly, curious word. “Dergie’s hoard, hm? It seems, the honor and reputation of her lair is at stake,” she asked with another narrowed gaze. She felt her mask of anger slip and chuckled with a low rumble at Plunk.

Chirganth surveyed her ample treasure pile then looked over the small, furred yeti with a raised eye ridge.

“Of course. And, just how did you manage to evade my death traps, protection spells, and the like?” the dragoness asked while Plunk continued to paw around.

“Dumb luck and bumbling then?” she asked.

She looked out beyond the curve of the entryway for her living quarters. A pair of well laid spike traps sat already launched, a number of false floors looked already dropped, and charred spots dotted the rocky walls from fireballs. She cursed at herself for building to average human height. And for sleeping through fireball explosions.

Big, sad, defeated blue eyes gazed at the dragoness. A quivering lip and fangs alongside it completed the unfortunate bundle of fluff’s downtrodden display. Chirganth looked the yeti over for a long moment. Confusion crossed her features at the sudden, immediate shift from confidence to acceptance of failure.

She glanced back at the well-intentioned but useless traps then to Plunk again. She growled and snorted then rumbled out an aggravated sigh. The yeti had been so sure just moments ago. Those blasted adorable eyes. This weird, silly little fluff.

The dragoness trudged forward and brushed her tail with a heavy push against a coin pile. She craned her neck down and picked up a glinting, blue-white stone in her teeth. She dropped it in front of Plunk’s feet. Sometimes she wondered what she saw in the mischievous creatures.

She watched Plunk examine the newly displayed treasure with awe and wonder.

“Plunk see what dergie find! Issa what Plunk look for!” Plunk exclaimed excitedly with bouncy hops around the treasure pile. The dragon’s maw moved into a broad smile at the display and shook her head.

“I shall let you keep this gem, warrior Plunk. Given your… expert thieving abilities, under one condition,” she said with a jovial yet firm tone.

“You must send the next young warrior to me, for the same sort of stone. Else how will I know the yeti of Kosul are worthy? That they are indeed so sneaky?” she asked. Plunk gave a firm, serious nod and snatched up the gem.

“Plunk do! Plunk send next to dergie for stealee perdy shinee!” Plunk called out and moved with a quick pace to depart the dragon’s lair. Chirganth let out a low, hearty rumble of a laugh. She watched the small bundle of fur skip past her death traps. Its movements were careless, almost accidental in manner.

She took a few steps back toward her hoard pile and brushed her tail against it to force more coins aside. In the soft light of her lair she counted the stockpile of revealed blue-white stones. The spherical gems shimmered gently. A plethora of them sat before her, ready to help her see more adorable yeti in time.

She need only wait.

During the quest period, your first PvP win of the day will reward you with a copy of Plunk Wumpkin! Once the promo period is over, you’ll be able to craft the card using Shiftstone as normal. 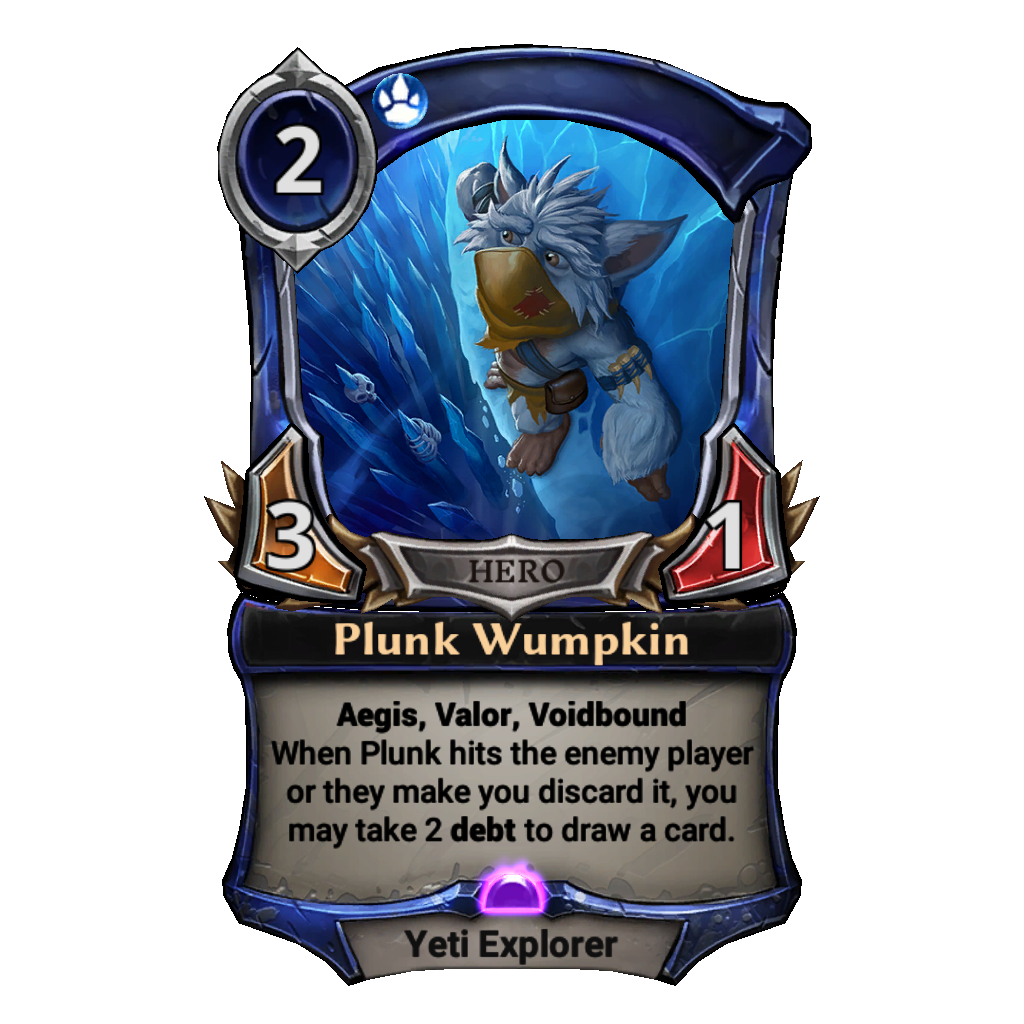 The Plunk Wumpkin premium Avatar will be available in the store for 300 Gems for a limited time. 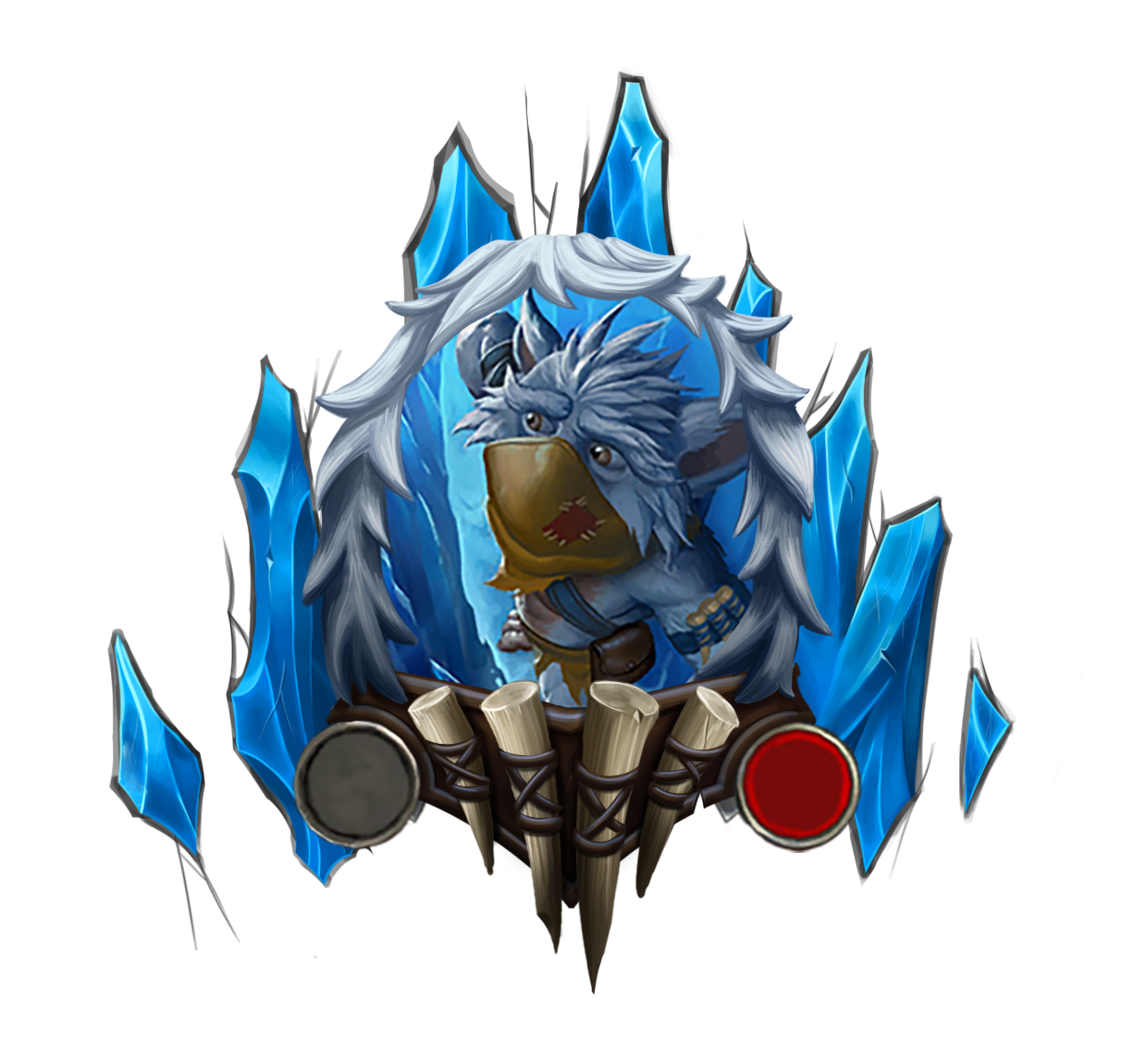 The Plunk Wumpkin theme deck bundle will also be available in the Store for 500 Gems for a limited time, and  includes the avatar and 4 premium copies of the new promo in addition to the theme deck! 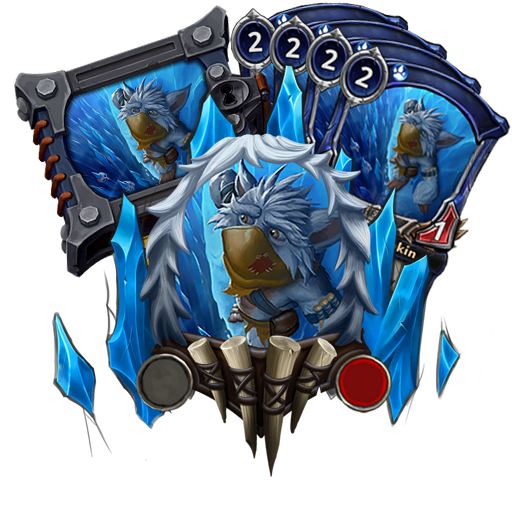