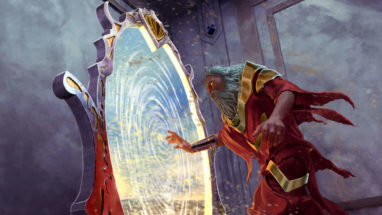 The subtle shimmer of the Quicksilver Mirror shone on Svetya and reflected off of the dagger aimed at her heart. She pushed hard against Camrin’s wrist and felt her sister drop the blade. The harsh clang of metal on stone sounded as Camrin moved to toss Svetya off of her.

Svetya rolled to avoid the fallen dagger and stood with a glare at her sister. She had no words, not yet.

“Why are you working with Azindel?” Vara called from the steps of the mirror’s dais. Her tone was cold, dark.

“I don’t answer to the swine of Argenport,” Camrin said. She stood up, seemed to weigh her options, then spat on the floor toward Vara.

“Answer the question,” Vara commanded. Camrin remained silent. Vara met the silence with her own then raised her arm. A swirling purple sphere materialized in her palm. Svetya watched with wide eyes as the sphere launched forward. She dove to block whatever the magic would do. Her breath caught in her throat as the projectile flew past her.

I’m too late, she berated herself. Svetya winced and waited to hear the pained scream of her sister.

Instead, the clang and sizzle of metal hit her ears. A bracelet with a purple gem inlaid clattered to the floor, mangled by Vara’s spell.

“What? You?” Svetya asked then looked between Vara, her sister, and the now broken piece of jewelry. She ran to Camrin who gripped her forehead with a groan.

“Camrin! Camrin, are you…” Svetya started but the words that followed fell away as she hugged her sister.

“You were an unwilling pawn to someone. I can explain but…” Vara looked around the room for a moment then nodded to Svetya. “Not here.”

“You’re alright?” Svetya asked and the concern in her voice held strong despite her best efforts.

Relief, concern, and confusion swirled together in Svetya as she held Camrin. Gone for months and now controlled by an unknown hidden assailant.

“Oh, good, it would be less enjoyable to kill you otherwise,” came a low, unhinged voice at the room’s entrance. Svetya’s eyes narrowed and her grip on Camrin became tighter and more protective.

“You found my seer. And you found my Xultan friend, though he wasn’t looking so healthy back in that hall. Now you’ve found my mirror. Wondrous. You’ve done a fantastic job, your grace,” the mage spoke with a disdainful glance at Svetya. A contingent of well-armored warriors in stolen Kosul gear and a cluster of mages flanked him. Svetya frowned. Those she’d left above were dead surely. More blood on his hands.

Severin gave a flourished bow. Svetya eyed his tattered robes with raised brows. Torns spots where flesh should have shown through instead displayed white bone and a faint green energy. Something beyond a dead man returned.

“You…” Coslo Deleph started with a tone of animosity mixed with uncertainty. Svetya watched the seer take a step back. A nightmare in the flesh for him. The Orene gritted her teeth.

Svetya noticed Vara raise her hand again with another sphere of shadow magic at the ready. She launched it with a hard wave of her hand. The projectile sailed through the air and one of Severin’s pet mages moved their hands in quick, practiced movements. Vara’s spell collided with a shimmering light shield that surrounded Severin for a second.

Svetya held back a laugh as she saw Vara smirk. The woman seemed to relish this challenge. Interesting at the least.

“Let’s kill him,” Camrin said. There was no question in her words. Only certainty.

Svetya drew her knife and launched herself at her prey.

Chunks of stone exploded as magical bolts slammed into the walls. Smoke flowed through the air from fireballs that dissipated on impact but their heat remained. Svetya growled and thrust her dagger from below. She aimed squarely for Severin’s belly. The mage was wily, quick, despite his frail-looking form.

Svetya kept a careful gaze on her foe as he stepped to her right. She turned to face him, the forked dagger he held was a formidable opponent to her own knife. She squared off against him a few feet from the steps that led to the mirror. The sconces around the two of them flickered as spells slammed together in raucous explosions.

Vara and Coslo kept the mages at bay, Camrin had taken the fight to those armed with stolen swords. Svetya found herself within arm’s length of killing Severin. One slash at the right spot, again and again, would end him.

Svetya took a step to close the distance between them and kept focus on her measure. Closer. Closer. There.

She leapt forward with a thrust aimed from her left side. The mage retreated up the steps nearer to the mirror. Her knife made contact with his dirty matted beard. It sliced through to a part of his shoulder that felt like cutting into bone. No blood flowed from the wound.

Her muscles were aflame, her body ached. The months of travel, the long search, the fire of hatred, the passion of revenge. It all welled up inside her. She moved up the stairs with a scream to thrust through the air on her right side.

Her anger overtook her judgement and the mage retreated further with a smirk when it missed. He waved his own weapon with a dark chuckle.

“Your brother’s screaming was absolutely beautiful,” Severin said with a crooked smile. His left eye looked fully taken by a gold magic glow. There was no humanity in that golden void.

Svetya shoved herself forward as her thoughts fell apart. Her rationale disappeared. How dare he. Her arm sailed through the air with a guided thrust against the mage inches from the mirror. Hot, rageful tears flowed as she felt it connect. Papa’s knife. Her blade. Their weapon.

Through the rush of anger she felt a harsh jolt of pain from her stomach. She gritted her teeth, growled deep and angry. The mage’s dagger sat embedded in her chest as warm, wet blood dropped onto the stone floor.

She glanced away from those crazed eyes toward her own dagger. She had missed. How? Every movement practiced. Every thrust calculated. Even when cornered the mage had tricks. Or had she subconsciously held back from killing him, even now?

“What do your screams sound like, dear Orene?” Severin said as if he were cooing to a small bird. Svetya’s eyes went wide as she felt more blood flow. Camrin was fending off two of Severin’s soldiers. Vara and Coslo were locked in a duel of spells and curses with his mages.

She closed her eyes and felt the sting of tears still hot and angry and felt her dagger seeking more to rend.

Her eyes shot open and looked up at the sound. Her dagger was embedded in the mirror. The artifact’s glass splintered quickly from the force of her blow. The lines of impact expanded as the glass creaked under the strain of Svetya shoving Severin against it.

Severin’s look of realization came a second after Svetya’s. His mouth moved to speak and Svetya took that opening. Let him talk away his chance to escape. His words didn’t process as her pain and rage came together. She glared at him and kept her grip on his shoulders. She dropped the knife.

She moved with her hips, pressed her entirety against the mage and pushed.

She shoved at him with every ounce of her strength. The nightmares of her dead family at his hands. His cackling laughter in defeating her. The suffering. The torment.

The entirety of her fury slammed into Severin.

The glass gave way as did his bones. The mage shot his arms forward to grasp at Svetya but she pulled back. Through tearful, blurred vision she watched Severin fall into the mirror. No, not a mirror. A gateway.

A flash of silver light enveloped him as she saw a look of shock and terror fill his eyes. Severin screamed and disappeared into the swirling void in the mirror amidst a ring of glass shards.

Svetya kept her gaze steady and harsh upon the silver light. She waited for more of his tricks. For his reappearance. She waited for the ghoulish thing and his terrible cackle to come back.

Nothing came but darkness as she collapsed.

Svetya leaned on her scepter as she took a breath. The royal store room was spacious but darker than she would prefer.

“Was it the right choice?” Svetya asked as Coslo surveyed the Quicksilver Mirror that stood among other reclaimed treasures of Kosul.

“There wasn’t enough time to see, and with how your path is different, and so much chaos in the battle… I honestly… don’t know,” the seer replied with a sigh.

Svetya breathed deeply to calm herself then nodded to him. Was Severin like her? Paths unbranching? She looked over the replacement glass in the mirror, courtesy of the Praxis Arcanum. Talir would be keen to learn about all this, Vara had mentioned.

“Did you know it was a portal, as well as an artifact of communication?” Coslo asked.

“I knew only what my instincts told me. I only knew what felt… needed done. I did not think. I simply acted,” she said more calmly than she anticipated.

Coslo nodded and put an arm on her shoulder.

“Should we return to the feast? Strengthened diplomatic ties and friendships celebrated and all that,” Coslo said with a small smile.

“Yes. I’m sure Vara is just distraught at our absence,” she said with a laugh.

“She does seem the sort to get so very concerned,” Coslo said as Svetya moved to leave the vault with him.

She took a final look at the mirror with its swirling silver light then headed toward the throne room behind Coslo.

The prey had vanished. She knew not if he would return, but she had friends and allies to call upon if he did. She would be ready. Kosul was safe.

And she had won.

During the quest period, your first PvP win of the day will reward you with a copy of Quicksilver Gateway! Once the promo period is over, you’ll be able to craft the card using Shiftstone as normal. 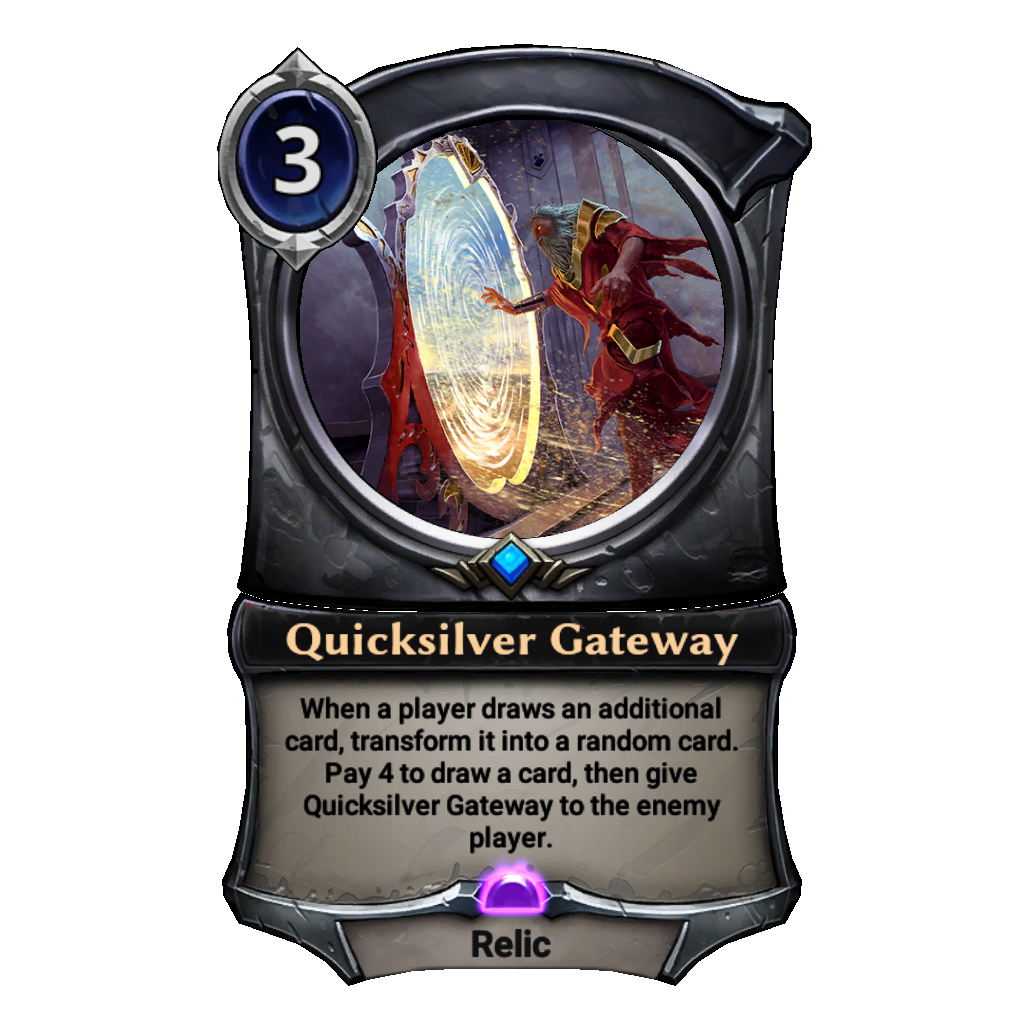 The Quicksilver Gateway premium Avatar will be available in the store for 300 Gems for a limited time. 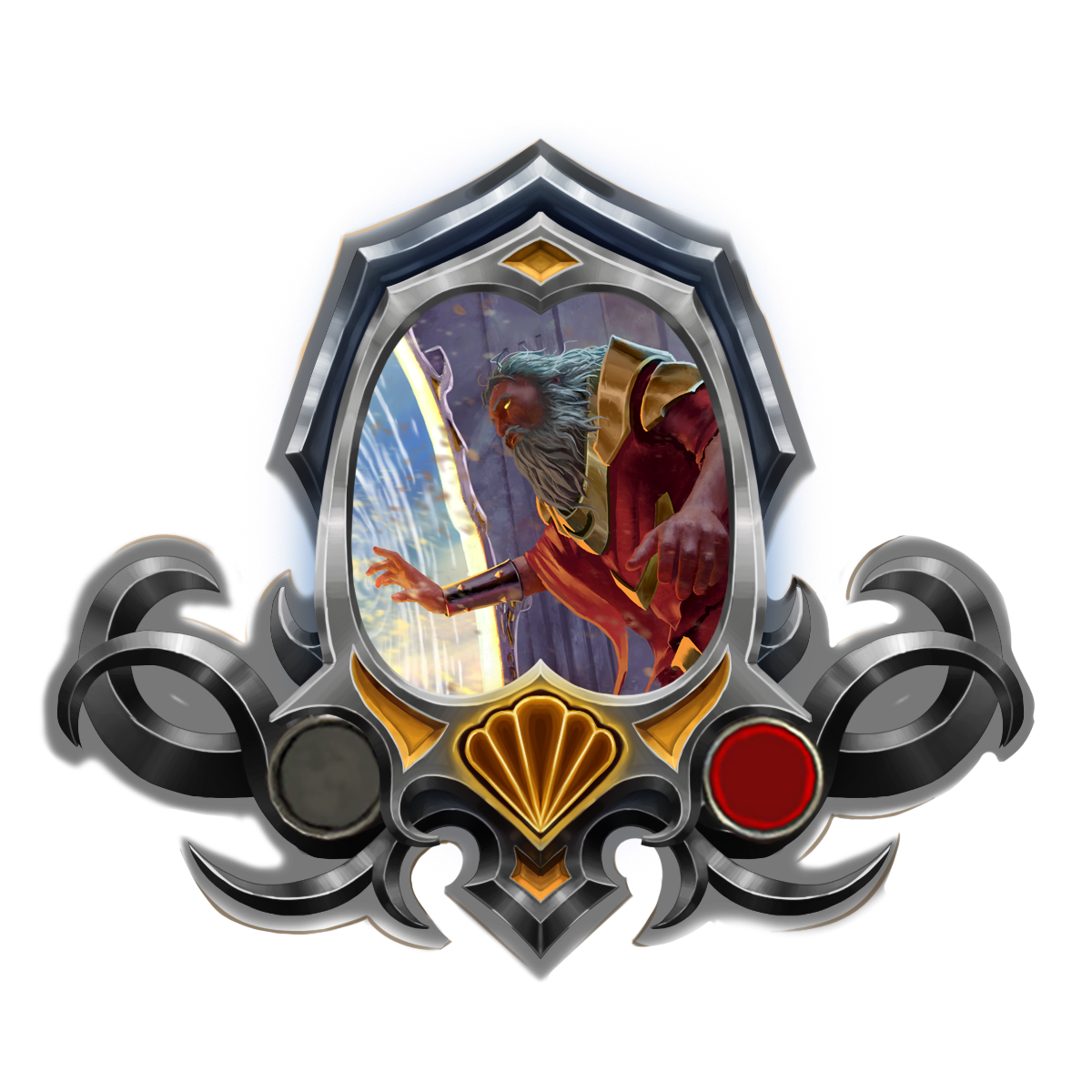 The Quicksilver Gateway theme deck bundle will also be available in the Store for 500 Gems for a limited time, and  includes the avatar and 4 premium copies of the new promo in addition to the theme deck! 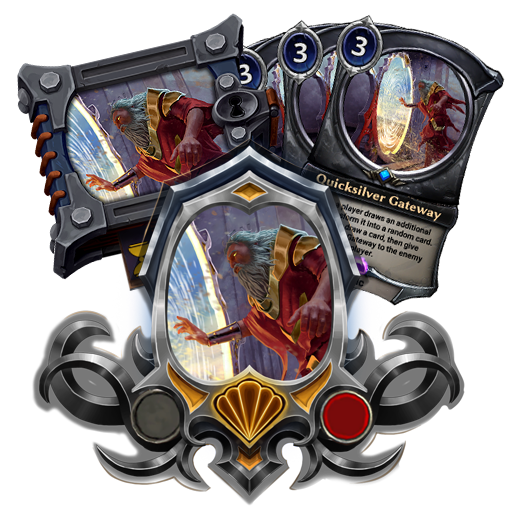 Gifts of the Mirror