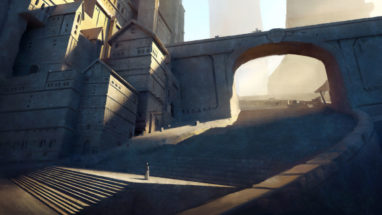 Kisitro was exhausted. Her thin tail hung limply down the back of her chair and reached the floor that her short legs could not. Blueprints and technical diagrams covered the desk in front of her, some worn thin by the hands of dozens of other mages. Every trustworthy set of eyes had been tapped, every line and measurement given the utmost scrutiny. All of Bastion rode on this.

She didn’t even turn to look. There was too much work to do. “That’s me. What do you want?”

“I have a delivery here for you,” the intruder continued. “A shard of some sort?”

With energy she didn’t know she had, Kisitro leapt from her chair and darted up to the courier, a young oni woman with long black hair and pale red skin. She wore a satchel at one hip and a leather tube across her back.

“How many died to retrieve this one?” Kisitro asked, then stared up at the taller woman.

The oni frowned and stammered, “I… don’t know. They don’t tell me that sort of thing.”

Kisitro was already walking away with the leather-wrapped package in her hands. It was heavy, in more ways than one. “No matter. This will be worth it. It has to be.”

For countless generations, the Grand Builders had been unified in a single purpose: to build the tower city ever higher and outrace the rising Shadowsea.

Now they had a new purpose.

A dozen mages gathered in a secure courtyard in the Reach, blanketed in cool night air and the dim light of the stars overhead. Marble walls and immaculately trimmed hedges surrounded the open clearing, kept orderly despite the chaos in the city below. In the center of a ring of etched runes stood an ornate crystal pillar four times Kisitro’s height. She had contributed to its assembly with numerous Waystone shards salvaged from the past, each more precious than all the wealth of the Reach.

She stepped forward and presented the final shard, scarcely larger than her small fist. A bearded mage lifted it into the air. Kisitro returned to her place outside the circle of runes. She joined the mages in liquifying and reshaping the shard to fit the last gap in the pillar, then slotted it perfectly into place.

The pillar began to glow a vibrant amber, as bright as the rising sun.

So far so good, she thought.

The beacon was active. Now all that remained was the call.

Kisitro knew that Bastion was not alone, not entirely.

She remembered tales from years long past. Tales about how the most foolhardy Asri riders had traveled beyond the horizon, flown for days without rest, and eventually encountered signs of other tower cities. Other fragments of civilization that had defied the Shadowsea. The journey had been too long and too perilous to repeat, but Kisitro had faith that another city yet remained.

The stories had to ring true. For all their sakes.

And now, after running through all other options, Kisitro watched with a worn but hopeful gaze as the Grand Builders sought to reach out to those distant strangers. To beg them for aid against the disease that ate Bastion from within. 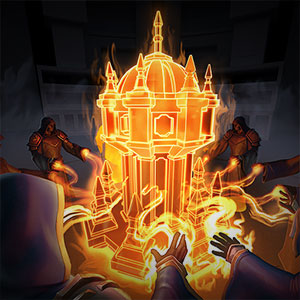 The mages closed their eyes and held their palms out. They channeled their energy into the Waystone beacon and the light grew brighter and brighter until the courtyard was illuminated like midday. Hope. Fear. Desperation. They channeled all their emotion into it and called out to anyone who would listen.

Kisitro and the other Grand Builders held the spell as long as they could, but one by one they reached their limits. The wisps of golden light at their fingertips sputtered out and their hands quivered and fell to their sides.

The beacon was lit. The message was sent. And now they waited for a reply.

Kisitro held tight to her optimism. She trusted in her design and the other mages. She believed in the existence of other civilizations. Her only doubt was whether those distant people held a solution to the Awakened threat.

Silence clutched the courtyard like a vice, and a new doubt blossomed.

What if they choose not to respond? What if they’re worse off than we are? Kisitro wondered.

One of the younger mages sat down and folded his legs beneath himself. His face sagged like he had all but given up. The others stayed on their feet, determination in their eyes.

Kisitro rubbed her temples. She tried to will away the intrusive thoughts, the fear and doubt. As the minutes stretched on with not so much as a flicker from the beacon, her resistance faltered.

What if no one heard us? Maybe Bastion is all that’s left, and the Queen of Glass will be the end of everything…

One of the eldest Grand Builders, a man with thin hair and broad shoulders, cleared his throat. Then once all eyes were on him, he spoke. “It was a good effort, and a shot worth taking. Don’t let this distract us from our ongoing-”

Like a thunderbolt, a searing white light shot skyward from the Waystone beacon, and stunned the mage into silence. A rush of hot, dry air swirled within the runic circle and stung Kisitro’s eyes.

A second later, a figure emerged from the beam of light and stood before the beacon. She wore sand-colored robes, weathered yet sturdy, and her deep red hair cascaded nearly to her feet. A staff topped with a gold serpent was clasped tightly in her left hand. 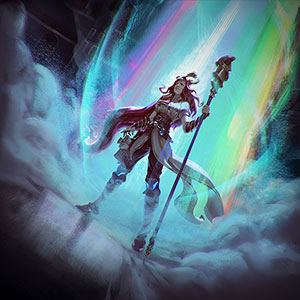 An altogether different answer, Kisitro thought with unease as she studied the woman.

The light faded and the new arrival looked around in cautious curiosity. “Where is this?” she asked. Her amber eyes swept quickly around the circle as she took in her surroundings.

The other Builders were too stunned to speak. Kisitro answered. “We are in the Reach, the topmost level of the city of Bastion.”

The woman’s eyes narrowed. “The Bastion of the Dawn?”

“Sorry, but I don’t know that name,” Kisitro admitted. Then she forced a smile and said, “I am Grand Builder Kisitro. On behalf of all of Bastion, I thank you for answering our call for aid. Though I must admit I did not expect it to be answered in quite this manner.”

The woman nodded. “I am Talir, Archmagister of the Praxis Arcanum.”

“Praxis?” a Builder whispered. Then he grew bolder. “Where are you from?”

“As I said, the Praxis Arcanum. Though I suspect the places of my homeland are just as unknown to you as this place is to me,” Talir said.

“I heard of some details during my… journey… but I would appreciate more information about your city’s situation.”

If she’s the one to save us, no use hiding the details, Kisitro thought.

Kisitro swallowed her concern, eyed the beacon warily, then looked to Talir and let a flood of words follow to fill in their guest. She spoke of the Queen of Glass and her Awakened, the normal folk she’d seen go mad with twisted hatred for all of Bastion without cause or warning. She spoke of the destruction and death the Awakened had wrought, and the recent escalation of their terrible acts.

While Kisitro explained, anxiety and impatience rushed through the other Grand Builders. They speculated aloud of a deeper meaning behind Talir’s arrival. They whispered doubts about her ability to help. The mages, all as exhausted as Kisitro was, fell to frustration and bickering.

Another loud crack sounded, the courtyard darkened, and the murmurs halted. The beacon’s amber light faded as the entire pillar crumbled to sand. Kisitro sensed that whatever ancient power the Waystones once held had been fully depleted.

All eyes returned to Talir. Kisitro kept silent and watched her.

Whether she was capable of saving Bastion or not, Talir was the only help they would get. 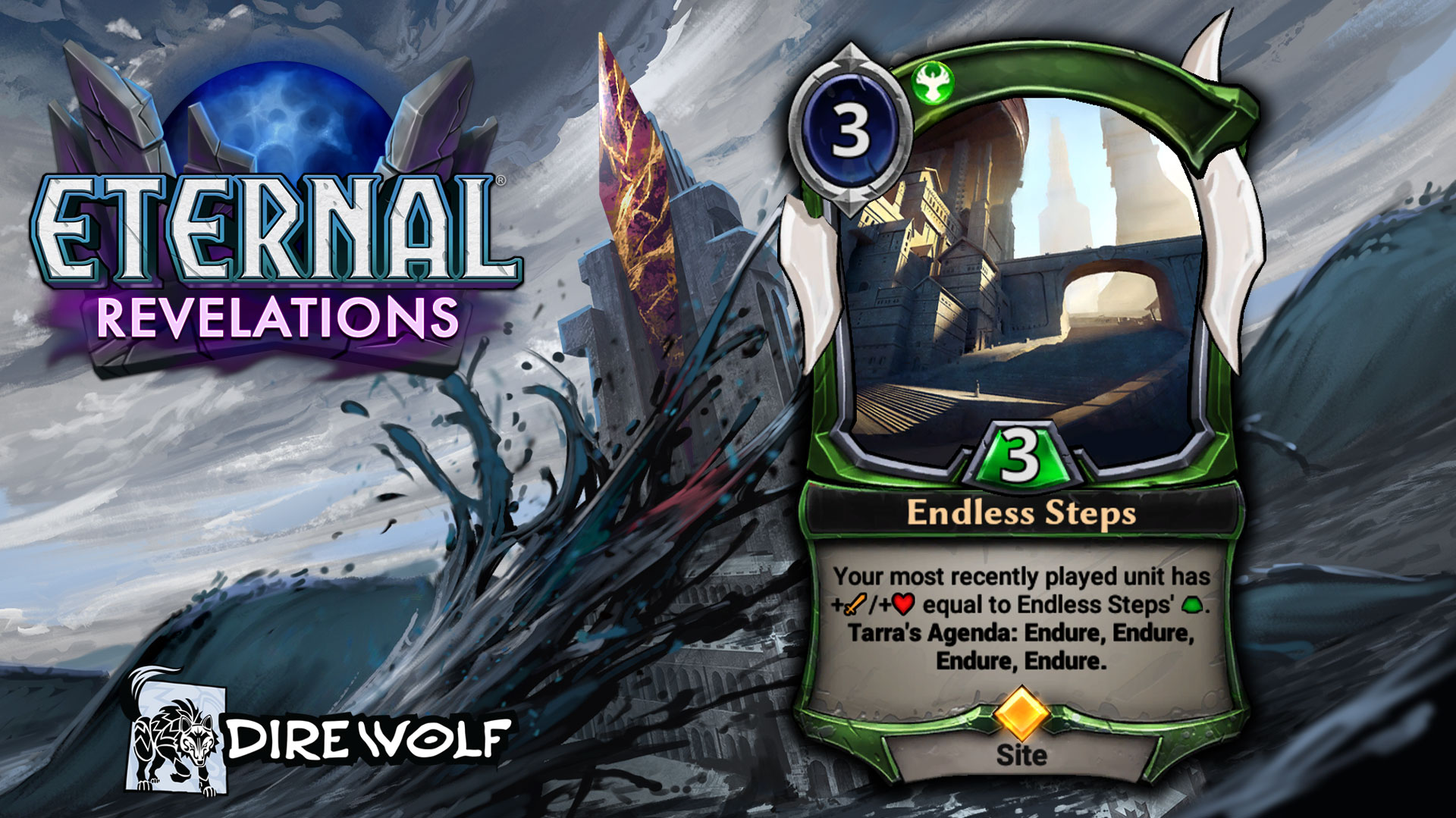