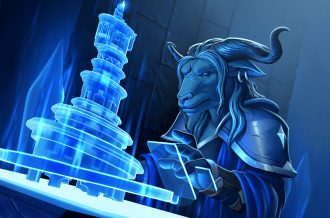 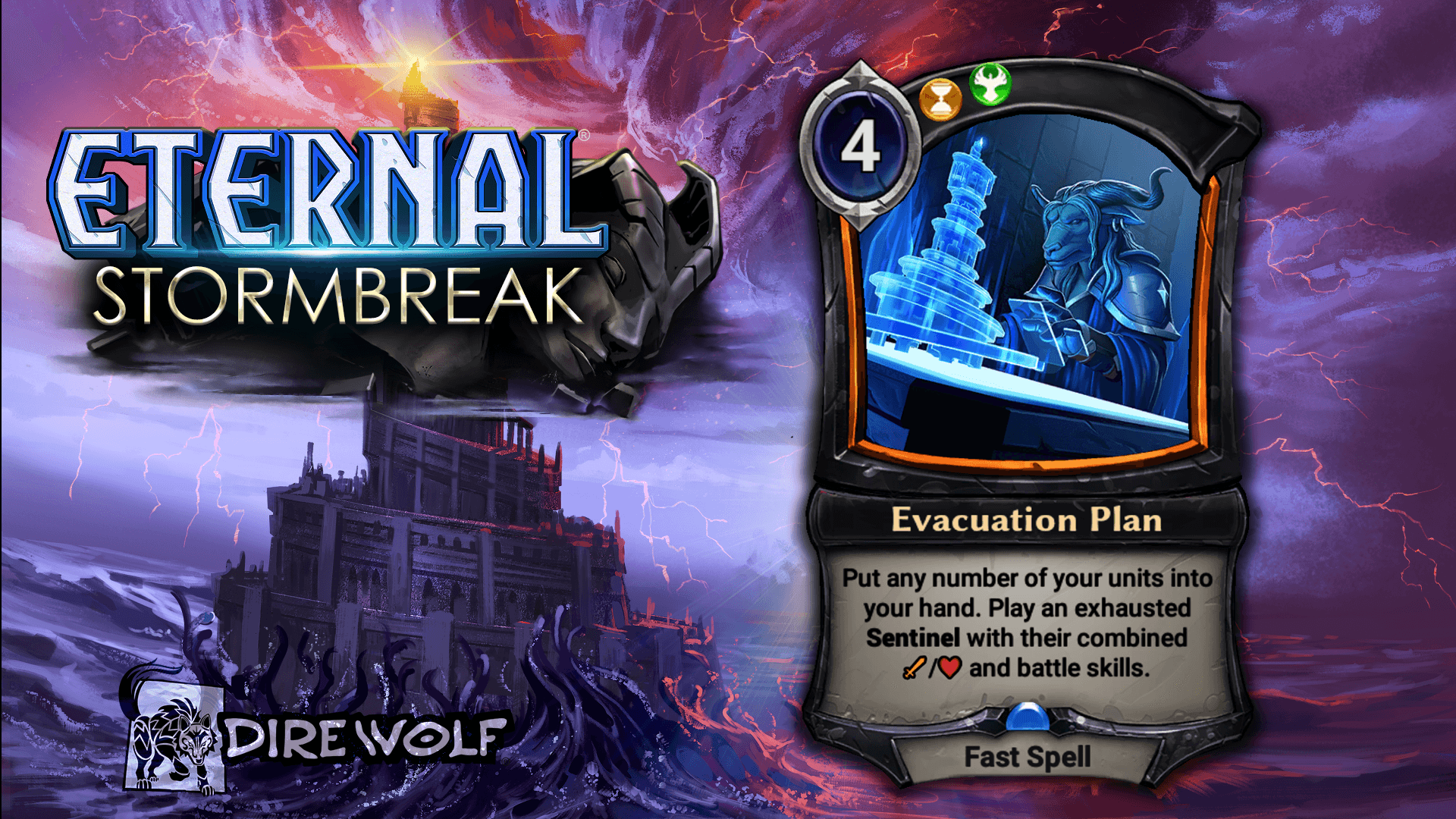 The skimmer-leather tube was thick, with silver clasps on either side and a matching leather strap that dangled lazily against it. The container leaned against a wooden chair in the eatery before it was clutched by a long-haired oni. Words half muffled by skimmer meat came across the restaurant toward the kitchen door.

“What?” was the only response from the head that poked out, “I know it’s good, but at least chew!”

The skimmer meat was devoured a second later and words came from the oni a second time. She pulled tightly on the container’s strap and adjusted the tube at her back.

“Nope! You think I got that kind of time, Sylph?” she laughed and moved closer to his peeking head.

“I said, save me some scraps over the next couple days? Going to be a long trip down to the Bellows and I’ll be hungry when I get back,” she told him with a nod. She watched his face grow stern and uneasy, the previous jovial tone nearly gutted.

“You sure you need to go so far down, Tila?” he asked and moved fully through the door. The whole of his figure in grey attire did not take up much of the entryway.

Her look back was equally stern and annoyed.

“I. Am. Capable. You can’t keep thinking every single time I go past the Pumpwerks I’m going to end up like Kles. You just have to stop,” she said and felt more emotion flow into her words than she wanted. She cursed herself for letting it happen. Again.

She watched him idly massage the large bandage on his shoulder. She saw him wince but ignored it.

“I get caught up in what-ifs. You’re all I-” he started, his voice a little more desperate and she held up a hand.

“I am well aware. I know. And I try to keep that in mind. I really do. But you just need to stop. Alright? Kles… he didn’t know about the storm but it’s been so long…” Tila’s words fell away and the rage she hadn’t noticed welled up.

“There’s going to be another one,” came Sylph’s quiet response, only loud enough for her to hear.

She looked Sylph over and saw frailty and fear she hadn’t in years. Years of pain and terror piled on at just a shift of his eyes. He looked small, alone, and deeply tired.

“The big guy told me himself,” Sylph said and nodded toward his bandaged injury.

So much for leaving that question alone, Tila thought.

She ran her index finger in a circle and stared a bit too deeply at the counter’s checkered pattern. She sighed loudly and looked to Sylph.

“Well, like I said, I’ll be back in a couple days,” she said and double-checked the leather strap that she knew she’d already tightened. She turned and headed toward the front door.

“You can’t still want to deliver messages down there? To them?” Sylph said. His voice had found strength somewhere in his quiet fear and Tila turned suddenly back to him and scowled.

“We were them. We are them. What difference does it make how high up we are? Are you that attached to the nobles’ boots?” she spat and met his gaze.

“This needs to be known. I need to tell them,” she nearly growled the last word and stormed out.

The fruit smelled horrendous and looked rotten, but tasted delicious. 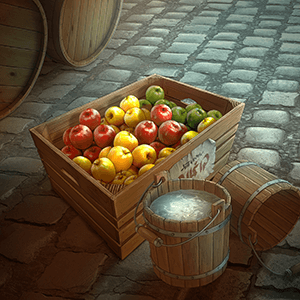 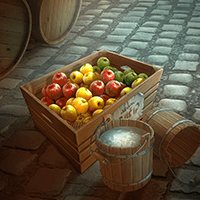 The fruit smelled horrendous and looked rotten, but tasted delicious. Tila chewed a long moment with this mixture of senses. Her face scrunched up before she gave a light smile. The experience was quick but the taste lingered on her tongue as a reminder. She preferred Sylph’s skimmer stew but this sufficed. She shook her head and pushed away the rage that tugged at her when memories of him resurfaced.

Tila looked over to the minotaur and chewed on her words like the fruit before she spoke. He smiled gently and his deeply gray hair dangled down his back. It swayed a bit as he nodded his head to the oni. The minotaur started before she could.

“You like it? Shanya got those just fresh this morning. Spry that one, headstrong, but… what do you expect with a shorthorn born with a sword in her hands? Tall too! Towering since she was young. She’s not too keen on me still calling her a shorthorn, though! I’m grown now, quit that granddad, she’ll say! Ah, she’s such a jewel,” the elder minotaur said with a labored laugh that slipped into a cough. Tila noted that his smile didn’t fade, but merely paused at the cough then continued wide, proud, and joyful.

“Appreciate the letter by the way, did you know my son’s all the way up there rubbing elbows with people in the Reach? The Reach!” The minotaur’s smile widened and he leaned forward against his fruit stall. The fruits that twisted Tila’s expectations of food sat in a basket

“Uh, happy to be of service, Glint, and thanks for the fruit. You really didn’t-” Tila started to reply but the minotaur continued with no more than a nod of acknowledgement.

“Sure, sure! Great to have you come by after all, wish that boy would send more than just a bit of parchment with some numbers of how much gold he has. Don’t get me wrong, glad I can get by with his payments, but maybe he could come down to have a bit of a meal? He might even like that fruit as much as you!” the minotaur said and slid another round, red-purple melon-shaped oddity toward Tila. The oni gave a polite smile and graciously accepted the gift.

She placed it in her missive container on top of the pile of six others that were squished together in there. She winced a second at thinking how long it would take to clean out the juice now sticking on its inside.

“Well, thanks again, but really, there’s another reason I stopped by, aside from the letter…” she started then leaned a bit more against the wood of the stall. She spoke more rapidly and quietly, partly to get his attention but also to dodge further interruption.

“I’ve been telling others as I’ve delivered and… they all agree, it’s time to head up. Make a move from here,” Tila said.

“Rumors got you all scared, huh? About that lady, what’s her name, Queen of Glass? That’s all it is, rumors,” Glint interjected 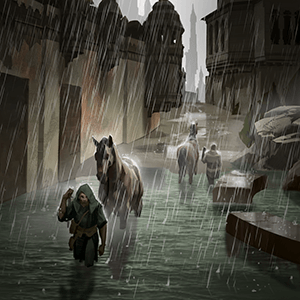 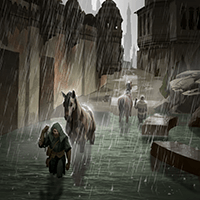 The minotaur folded his arms across his chest and leaned back. He looked thin but healthy save for eyes that had seen perhaps too much and hair that had grayed too early. His big smile didn’t grow but it didn’t fall either. Tila followed blue eyes that pondered and sussed out her words.

“Run away? That it?” The minotaur said with a more flat tone. Tila raised her hands up defensively.

“No? No. It’s… Glint you know the dangers even better than me. And with Kles…” she trailed off and looked at him. She kept her gaze firm. That was the second time in too recent memory that her brother had been brought up. Tila relaxed her hands that had balled up into fists unknowingly.

“Oh, I know. That kid’s a tragic tale about the dangers of it. I remember it all too well. Not enough drink in all of Bastion to get that gone,” Glint replied and finally his smile fell. Tila watched him give a shrug as he seemed suddenly so far away despite nothing between them but fruit.

“You know, we tried last time, right? No, you were too young then,” he continued and didn’t wait for a response.

“They stopped us. Barricade held up real good. Shadowsea coming up behind us, blades and barricades in front. Ever been trapped like a rat? We tried to get help from up top and they slapped us down. Had to find our own way up, make some… agreements I won’t talk about,” Glint said and a rough grimace came across his features.

Tila felt the rush of desperation, outrage, and fear swirl inside her and this time she kept her fists at her side.

“You said yourself, your son has clout with the nobles now. We could get a group together to make our way through, we could-” Tila began again, her mind reeling to pull out any nugget of truth or persuasion to get him to move.

“Shadowsea comes for everybody in some way, at some point, I’ve made my peace with it Tila. Not leaving,” Glint said with hard finality.

“What about Shanya?” the oni asked.

A long moment passed followed by another with no answer from the old minotaur. He leaned against a support beam, made a noncommittal noise then a grunt.

Tila’s thoughts felt as muddled as the old man looked. Silence, foreboding as the Shadowsea, held over them.