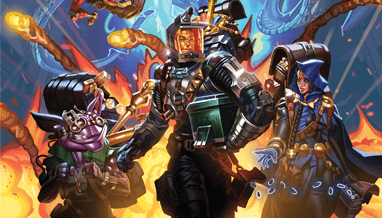 An unspeakably evil villain with a diabolical plot to destroy the world. It’s a fun and enduring cliché of science fiction. Clank! In! Space! had its villain in Lord Eradikus, but it didn’t really delve into his plans for destruction. That’s where the game’s first expansion comes in: Apocalypse! reveals the full scope of Eradikus’ villainy.

Just as you’d expect, Apocalypse! includes new cards for your adventure deck and new modules to alter the game board. But the biggest change to the game comes with the 8 new Scheme cards that represent Eradikus’ efforts at planetary annihilation. In fact, Schemes change so much that they can’t be contained on normal-sized cards. Each one is a double-sized jolt to your adventures.

At the start of each Apocalypse! game, you select one Scheme for Eradikus to pursue. We had fun designing the Schemes to embody the best tropes of science fiction. We hope you’ll have even more fun playing out each scenario. Can you stop Eradikus from whipping an artificial intelligence into a homicidal frenzy? From traveling back in time to kill the leader of the Resistance? From unleashing a global viral outbreak? 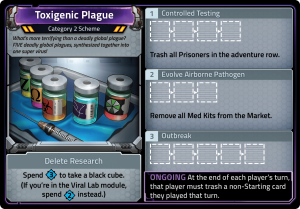 Every minute Eradikus isn’t chasing down the meddling thieves on his ship is a minute he can spend bringing about the apocalypse. Whenever a black cube is pulled from the boss bag, it’s placed in the next empty square on the Scheme. When each of the three phases fills up with cubes, you immediately carry out its effects. Phases 1 and 2 are always immediate actions—they happen just once, but they can still have a big effect on the players. (On Toxigenic Plague, for example, Prisoners and Med Kits may slip through your fingers.) Phase 3 completes Eradikus’ Scheme, bringing about an ongoing effect that lasts for the rest of the entire game! (Watch in horror as the Plague steadily erodes your deck!)

But you’re not powerless against the Scheme. Each Scheme describes a way that you can thwart Eradikus using Skill, Swords, or other means. Once per turn, you can take the thwart action to remove a black cube from the current phase of the Scheme (if there are any cubes there) and put it in front of you. Each black cube you collect is worth a victory point at the end of the game. 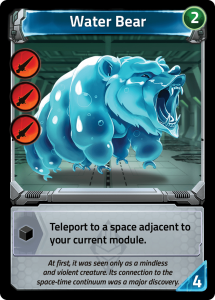 Of course, you are a self-interested thief eager not to upset the cyborg overlord of the galaxy, so maybe you need a little more incentive to play the hero? That’s where some of the new adventure deck cards like the Water Bear come in (along with new spaces on the new module pieces for your board). These give you ways to spend your black cubes for special abilities. When designing these cards, we worked to create unusual effects, stronger and stranger than in the original game.

Each black cube you spend goes back into the boss bag, giving you potentially more time to run around and scoop up treasure. But there is still strategy to consider. Maybe you don’t want to try to stop Eradikus? Take a look at another Scheme: 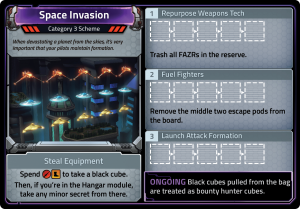 What if you’re in a 4-player game with the Space Invasion Scheme, and you’re running out ahead of your opponents? Maybe you don’t mind if two of the game’s four escape pods get removed from the board. Maybe once the bag’s remaining black cubes are being treated like red bounty hunter cubes, your opponents won’t even be able to reach the pod you leave behind!

With 8 Schemes presenting 8 distinct scenarios (and each one just as replayable as Clank! In! Space! has always been), there’s plenty to explore in the new Apocalypse! expansion. And if the end of the world strikes you as too depressing, don’t worry—we’ve got you covered too. Not every card in the expansion is all about the apocalypse. Many are just opportunities for more fun references we couldn’t squeeze into the original game. Take this card, for example, inspired by the idea to do whatever we could to make a character that costs 11: 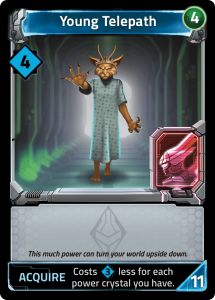 Clank! In! Space! Apocalypse! premieres at Gen Con 2018, and will be available soon after from your favorite retailer, starting August 22. Make your plans to join the fight against Eradikus today!